What a nice, normal day

Yesterday was awful: I watched more news than I normally would watch in a month.  Today is a normal, no-news day for me.  It looks like the sun might come out, but it's pretty chilly, which is alright; it's January, so it's supposed to be cold.  We are low on moisture around here and can't seem to get much of it; they do forecast rain, but we're only getting small amounts.

I don't have to slave over the stove today (ha, as if I ever "slaved" at a stove), because the grandson next door went out to eat barbecue somewhere in Kansas City and gave us the leftovers!  I have quite a few potatoes on hand, so I made potato salad to go with it.  Yesterday I made two loaves of banana bread: one with walnuts for me and Cliff, and the other without, for the grandson.  He really doesn't mind walnuts much, but he'd just as soon not have them, and nuts are expensive when I am staying away from Costco.  We might make a trip there next week though.  They say Tuesday, Wednesday, and Thursday are the best days to go.  I read that the best time of day to go is 3:30 PM, but that doesn't work for us because we'd be going home in rush-hour traffic; Cliff avoids rush hour like the plague.

I just finished a letter to my sister in Oklahoma and took it to the mailbox.  Lately when I go outside and take Gabe, I put the shock collar on him, so if he starts running off somewhere I can zap him as I holler "no".  He knows before I even put it on him that it's capable of hurting him, and at first would try to hide when he saw it in my hand.  Now he stays put, because he likes to go outside with me and has decided he'll take the risk.  I had to zap him once today, when he went running to the trash barrel first thing out the door and wouldn't stop.  After that, he obeyed any command I gave him, including "heel".  That one surprised me, because I didn't figure he would remember that command; I had decided it was hopeless for him to learn that particular command, and gave up trying.  But with the shock collar on, his memory works very well.  All I really want to do is get him so he will always listen to "no".  That could save his life sometime.

I woke up at midnight last night and thought to myself, "Did I put the cat out before I went to bed?"  I went to all the places he likes to sleep, but didn't find him.  Then I remembered one of his favorite places to rest:  Gabe's big ole cage!  However, Gabe was in there with the door closed.  Surely they weren't in it together.

Oh yes they were!  The cat was at the back of the cage and Gabe was toward the front, laying on his heat pad.  I crawled halfway in the cage, reached over Gabe, grabbed the cat, and went and tossed him out the door.  I told Gabe, "What happens in the cage stays in the cage."

Cliff is retrofitting some three-point forks that will fit on the loader when he doesn't have the bucket on the tractor, so he's been spending lots of time in his shop. 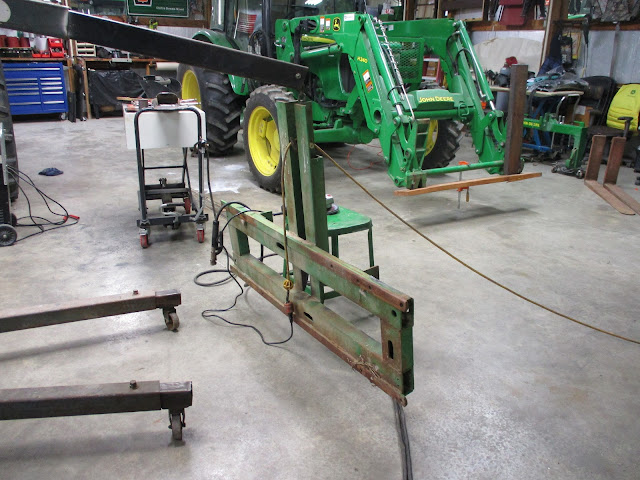 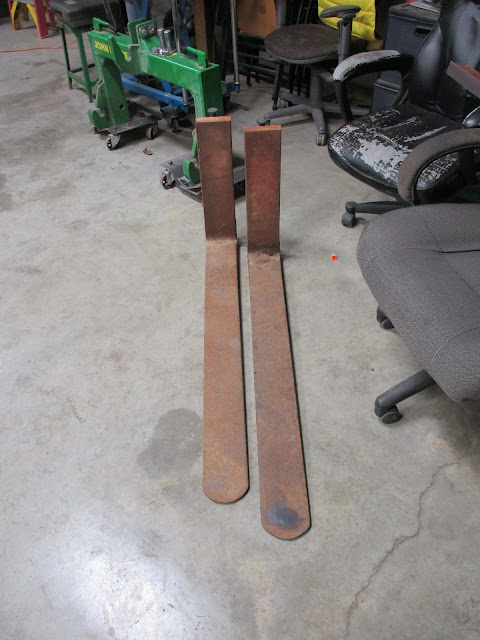 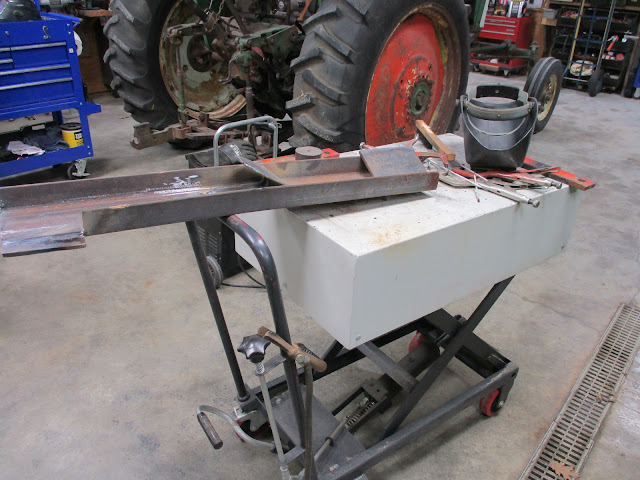