Bonnie's in a romantic mood today

When Iris and I went outside to check what sort of day it was going to be, I heard Bonnie bawling and bellowing.  Now normally, the only time she gets vocal is when I call her from far away or when she's separated from her calf.  I went around the barn to make sure her calf was with her; there they both were, lying down.  Bonnie bawled at me a couple of times, lying down.  This is not a normal occurrence; I suspected she might be in heat.  Sure enough, when she got up, she tried to "ride" her son.
I'd love to try breeding her to a Jersey bull by way of artificial insemination, but it's hard to detect the right time to breed a cow if there's no cow around that's big enough to mount her, because that's how "standing heat" is determined.
In a couple of weeks, if Cliff's brother has purchased a bull, we'll probably haul Bonnie and her calf over there to spend a few days.  He's been considering buying a Shorthorn bull this time around, which wouldn't be a bad mix with a Jersey. 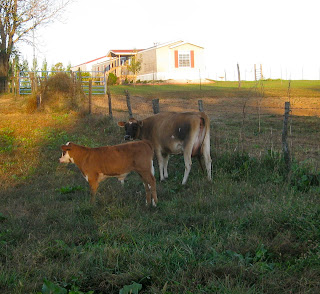 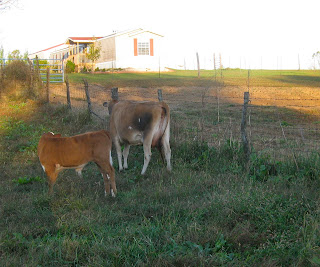 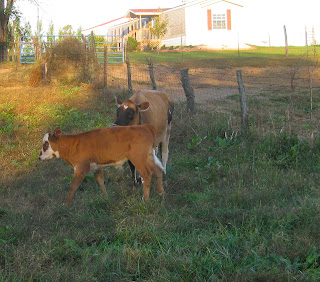 and tries to jump on her calf:  Oh, this is wrong on so many levels! 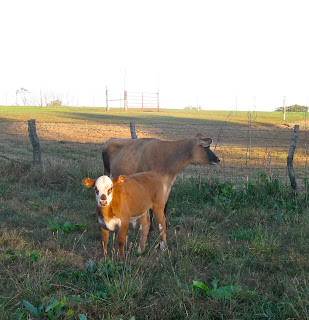 "My Prince Charming has to be out there somewhere!  Mooooo!" 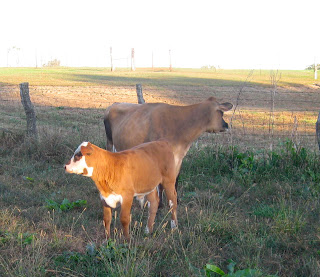 "What's wrong with my mom?  She's never acted like this before." 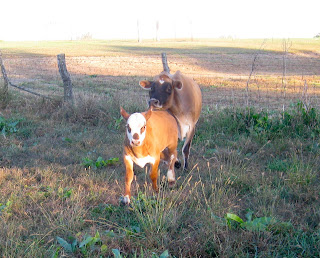 "C'mon, Mom. Stop that!"
By tomorrow Bonnie will have forgotten all about the yearnings that torture her today.  In three weeks it will happen again; hopefully when it does, she will be in the presence of her Prince Charming.
Posted by Donna. W at 8:48 AM

Email ThisBlogThis!Share to TwitterShare to FacebookShare to Pinterest
Labels: Bonnie in heat

Donna, this is so funny. Clyde is getting so big. Vicki

I love your cow. if i was able I would have one.
when I post about the flour sacks i thought I bet donna has worn feed sack if no one else.
I searched on the net and saw this, a young lady was out walking with her bow and fell. her dress flew up and her underpants were made from a flour sak with the slogen " southern best." she was embrassed but today the female would love the advertisement.

Cow Romance.
More than I am getting :O.

They go into heat every 3 weeks? Wow I didn't know that. interesting

Poor Clyde he doesn't have a clue!

Poor Bonnie! lol. So much love to give and no one to give it to. lol