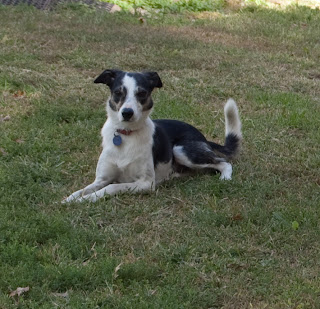 My daughter took a picture yesterday of her dog and Iris, lounging in the yard.  Because it's the best picture I've ever seen of Iris, I cut my daughter's dog out of the picture (sorry, Hawkeye) to get this perfect portrait of mine.
Iris has issues.  I'm fairly certain she could use a dog psychiatrist, but I can't afford one.  She will obsess on some crazy thing and chase it until she's exhausted.  She still attacks dogs, horses, and people fighting one another on television.  For a while she'd chase after birds in the pasture, but I think she finally realized she'd never catch one; so what was once a full-time job for her has become only an occasional, half-hearted effort.  In the house, she chases after reflections and shadows.  Just pick up a flashlight and she's all attention, because she knows once it's turned on there will be a beam of light she can chase.
It's dark now on the mornings when I milk the cow.  Normally I would feel my way to the barn, then feel my way to the light switch and turn it on.  Now, though, with gigantic rats lurking in the shadows, I don't want to enter the barn in the dark and run the risk of stepping on a half-dead rat.  So I arm myself with a flashlight, and Iris chases the beam of light all the way to the barn.
Crazy dog.   I wish she'd learn to chase rats.
Friday evening I tossed bar bait and bait packets in places I knew the rats would lurk.  I bought three different kinds of rat poison; if one didn't work, maybe another one would.  Saturday morning, the bait was gone.  Good!  I placed more bait bars in the same spot.
Sunday morning, those were gone.  I put more bait of a different kind there; when Cliff and I went out to go for our walk, I told him, "Let's go see if they've hauled off the bait again."
While we were looking at the two hunks of poisoned stuff, one moved!  A rat was on the other side of the hole in the tin trying to pull it through.
Cliff suggested that they might just be hauling the stuff off and stockpiling it, and perhaps I should quit putting out the bait for awhile. 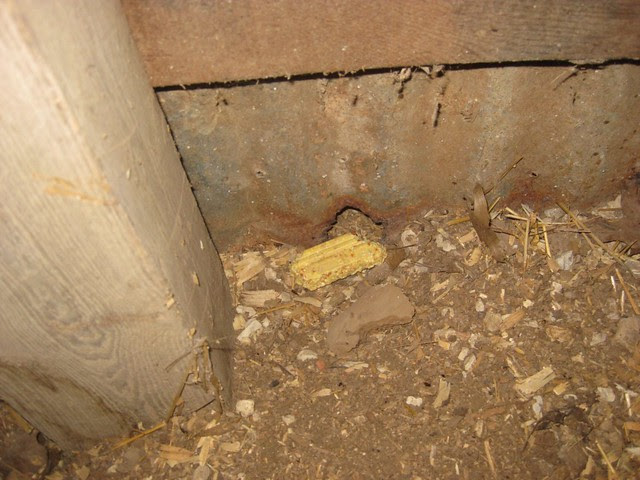 Since then, the bait has stopped disappearing.  I'm hoping that means the rats are in the process of dying and are too weak to come back for more.  There were originally two hunks of bait by this rat hole; the remaining one has been gnawed upon.  I think that's good news.
The only good rat is a dead rat.
Posted by Donna. W at 7:38 AM

Iris is so pretty. I assume that she's getting along with Hawkeye these days. Rats begone!!! Vicki

Iris and Hawkeye had a short tiff yesterday, but it ended without bloodshed.

Hope the rats shared with all their friends, and you'll be rat free...at least until next time...
Have a great week, Sheila

I would agree with you on that one. I know that they must be part of God's plan in creation as they are here but rats don't have any good attributes that I've heard of. That is a very nice picture of Iris. One of DD's dogs goes crazy after light beams too. I do know how that goes.

I hope you are done with rats. Your dog looks alert and happy. We lived close to a river and the river rats were just thick. We put poison out and we had a dog that ate a rat and died from the poison. That dog would have eaten anything, but a rat?? We hjasd 2 other dogs at the same time but they seemed to know enough to stay away.

We uncovered rat nest once where poison we had put out had been stockpiled and had not been eaten. An innocent animal that eats a rat killed by poison could be killed also... We have had good luck with a small live trap; putting a layer of grain at the bottom of a plastic or metal trash can with a small hole in the lid -- rat falls in and can't get out.

I hope they are ALL dead. Is there any use for rats anyway? They're not good for anything!!

Iris is beautiful Donna. Such a pretty girl. My sister's dalmation was a dog who suffered OCD ... chasing reflections, lights, shadows ... drove her and himself crazy for years. Then she found an all natural product; couple of drops on the tongue in the morning didn't cure his obsessive behavior but calmed him quite a bit. If you're interested in what the product she used is, I'll check with her.