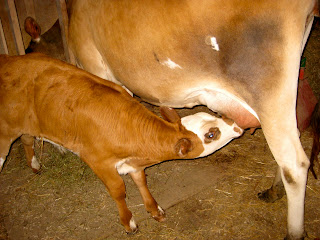 picture taken this morning
Cattle, like people, have their own personalities.  Last year, Bonnie's calf (Sir Loin) was gentle and cooperative.  If I needed to put him up for the night so I could milk his mother the next morning, I simply opened a sliding door and gently tapped him with the cattle prod; I could guide him as if he were a trained ox:  he'd walk in, and I'd shut the door.  He and his mother would bellow at one another at times while they were separated, but for the most part, they knew the drill and accepted it.
I don't think cows are intelligent enough to reason things out, but Bonnie acts like she remembers how we took Sir Loin away from her, and therefore is over-protective of Clyde.  They are seldom more than six feet apart.
I call them up the night before I want to milk Bonnie and shut them in the small lot so they can't run out; then I open the sliding door to the stall.  The first two times I did this, I was able to get Clyde into the stall without too much effort.  The third time, he went inside but ran out before I could get the door shut.  I'm not as fast as I used to be.
Last night, I chased him around and around the small lot until I finally realized there was no way he was going into the stall.  I finally drove Bonnie in, and he followed.  It was nip and tuck getting her out without him following, though.  If Iris-De-Dog stayed at Clyde's heels a little better, she could possibly help me. But just as I think she's doing things correctly, she'll run in a circle around the calf and chase him in the opposite direction from where I want him to go.
I have to lock Bonnie out of the small lot this year once the calf is put up, because she has figured out how to slide the door open with her head and let her calf out.  This morning she practically broke down a side door to the barn because I was too slow in getting ready to milk her.
Maybe this weekend I'll have Cliff help me make a video of a sixty-six-year-old woman chasing a spry young calf around.  I'll bet you folks would get a good laugh out of it.
On another note, I'm pretty sure I have rats in the barn.  I saw something last night out of the corner of my eye that was much bigger than a mouse.  I can stand an occasional mouse, but rats terrify me.  The war is on.

Email ThisBlogThis!Share to TwitterShare to FacebookShare to Pinterest
Labels: Bonnie and Clyde, rats

That doesn't sound like fun for you at all. A protective mama is something of a force to deal with for sure. Be careful! I hope you get rid of those rats...mice are bad enough.

Time to get some more cats! Snowbelle is slacking!