Found among my souvenirs

In 1967, with an infant son less than four months old, Cliff and I bought a little house on twenty acres. 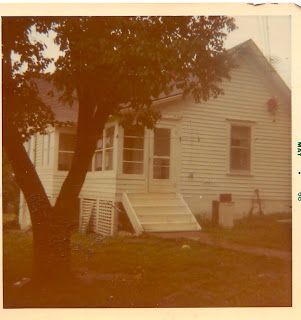 It had been vacant for awhile when we moved in; rats kept us awake the first few nights.  But by george, we had us a farm.
We needed a tractor, but we lived from payday to payday back then and couldn't afford one.  I remember Cliff and his brother, Phil, cutting weeds taller than themselves with a couple of scythes. 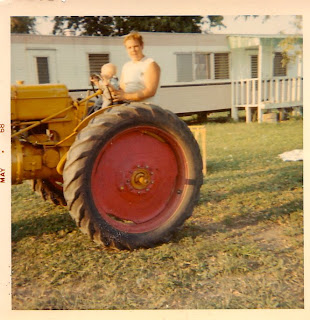 Then my dad took pity on us and sold us an old Minneapolis Moline that he really had no use for... for $100, I think; I imagine my parents let us make payments.
Cliff was glad to have that tractor, but the brakes were undependable on it; he almost killed Phil's boy, Randy, one time when the tractor got away from them.  So we had a tractor, such as it was; but we were badly in need of a brush hog to maintain our twenty acres.
The other day I was scrounging through old mementoes and found the bill of sale from the next tractor Cliff purchased after that one, a used Ford 8N tractor with a brand new brush-hog/mower. 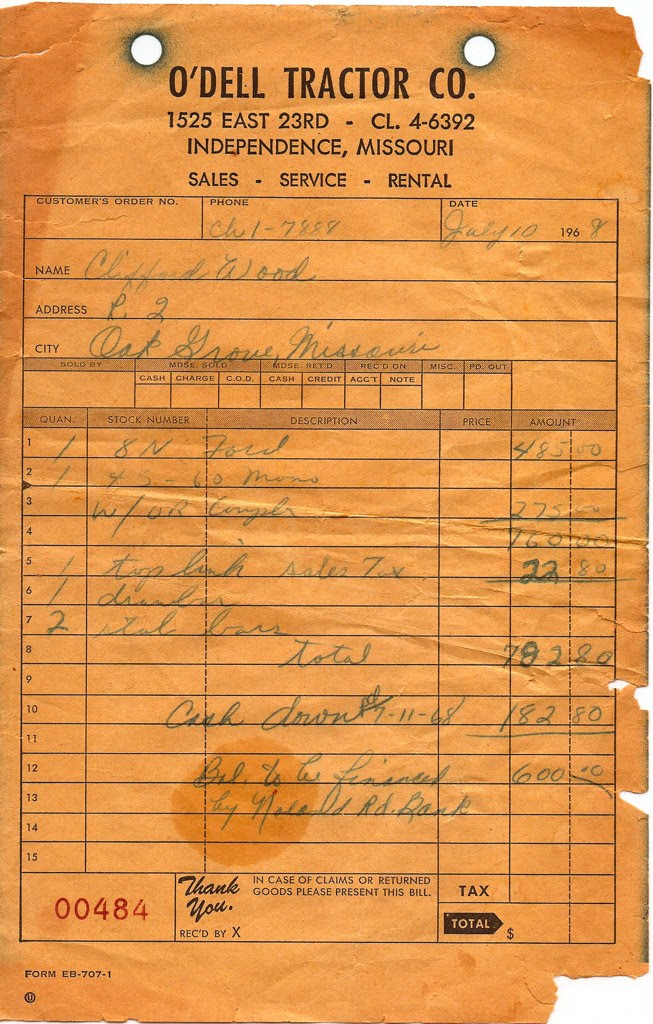 I'm still wondering how we came up with that down payment.  Seriously.  We were young, with a baby boy and a mortgage, and there was no extra money.  My parents were sometimes good for a quick loan, so perhaps we borrowed the down payment from them and paid them back a little at a time.  Lord knows we did that several times over the years.
Cliff put that little Ford tractor to work, clearing every bit of land that could be cleared.  He's had many tractors since then, but I doubt he's enjoyed any of them more than that first really good, dependable tractor.  That same tractor now goes for $2,000 and up.  When we had ours, it was just an old tractor.  Now it's an antique.  But you know what?  There are hundreds of them around, still running.
They don't make 'em like that any more.
Posted by Donna. W at 3:13 PM

I think about you and the tractors every time I go to the camper as there is a very old tractor sitting along the roadside for sale. I wonder if it will be there this week? Maybe there is another tractor lover in Ohio.

What a great entry! I really enjoyed seeing your very first home together and the tractor photo! By the way, what a great quote on your blog about June nights inventing romance!! I like that because it does seem that way!!
Lisa in KY

We live in the city and have no use for a tractor. My husband won't even watch the tractor shows on RFD-TV any more because it makes him want one so bad. Must be a guy thing.

Is this the same acreage that you still live on today?

No, Nancy; we're some twenty-five miles northeast of there. We have 40 acres instead of 20.