Cliff and Jim were behind the old trailer house the other day getting ready for its demise, and I went back there looking for a photo op.  My eyes landed on a large dog pen we acquired when we purchased the mobile home in which we now.  We've never used the dog pen.  The lady who sold us the mobile home simply threw it in.

"Hey, I should take a picture of that and put it on Craigslist," I said.
Cliff agreed, and he, Jim, and I discussed asking prices for awhile.
I figured fifty bucks ought to get it out of our way, left, and returned with a tape measure.  I knew if I didn't include dimensions in the ad, someone would be calling and asking for them.
Within a half hour, a man called and said he'd take it; he and his wife would be here within an hour to pay us cash.  He wondered if he could pick it up later, and we told him that was fine.
We all sat in Cliff's shop and waited for his arrival. 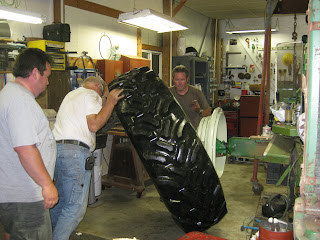 We were watching activities like this, as clouds gathered. 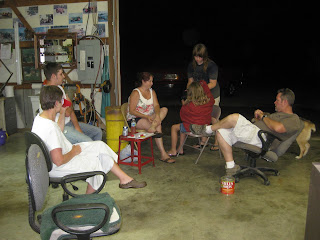 We hang out at Cliff's shop a lot in the evenings.  It's the place to be. 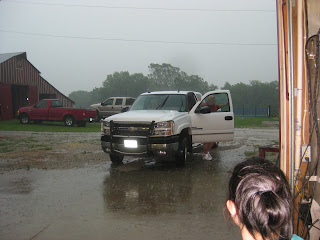 By the time the guy got here, rain was pouring from the sky.
He gave Cliff fifty dollars and said he'd be back in a couple of days. 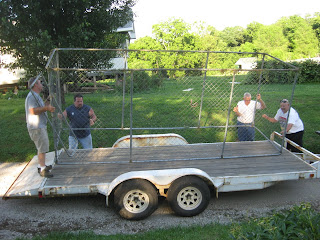 He showed up yesterday, as promised.
By the way, immediately after he called and said he wanted the pen, we got two more calls.
I should have asked more.
Posted by Donna. W at 7:03 AM

Oh ya you should have asked for more for sure. Those pens are expensive. He got a deal thats for sure.
And i'm sure he knows it.
:-)

Good deal indeedy! Cliff's shop sounds like a great place to hang out!

You sound like John. No matter what he ask and got he always should have ask more. He doesn't know about Craig's List.

Looks like a good pen for that price. Sounds as if you would have made more if you had of priced it higher. Helen

that guy got a real great bargain for sure...but you don't have to mess with it anymore...and that makes it ok...you should change your name...Publishers Clearing House??? LOLOL...you do so good!!! glad you all are having a good time together!!! nothing like family to make the day a blessing!!! God Bless...Ora