I reported on April 4 that we put electric fence around the tender new grass, and fixed a gate that would allow the cows to enter while keeping the horses out.  In fact, we have restricted the horses from a great deal of the grass on our forty-plus acres, due to their gluttony which could lead to founder.
It was no trouble at all to get Bonnie into the enclosure the first time; I walked through the gate, shook a can of sweet feed at her, and she followed me with little hesitation.  This ain't her first rodeo.  From that time on, she has entered and exited at her pleasure.
Clyde, on the other hand, refused to follow his mother.  He stays out grazing with the horses, and if he decides he needed a drink of milk, he'd bawl at Bonnie until she joins him on the outside.
A couple of days ago, I got Cliff to help me and we literally forced Clyde into the electric-fenced area by crowding him through the opening.  He resisted for all he was worth, but we finally got him in where he grazed that tall, succulent grass and clover like there was no tomorrow; I figured the problem was solved.
Oh, if only it were that easy.  Once in, he refused to go through the gate to get out.  There's no source of water in there, and I doubt he's getting enough milk to take care of all his hydration needs.
So, Cliff and I tricked him out of the pen (very much against his will, I might add).
Here's how it stands as of this morning: 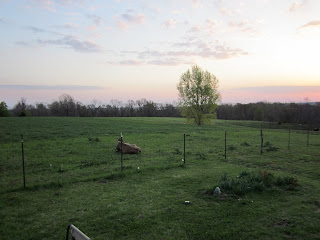 There's Bonnie, in the electric-fenced enclosure. 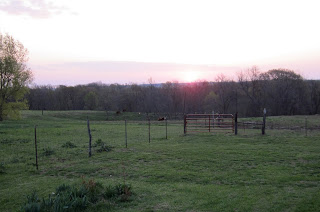 There's Clyde, out there where it's slim pickin's.

I wouldn't mind, except that Clyde is our next beef; I'd really like to have him on that tall, lush grass and clover, growing for all he's worth.
Stupid calf.
Posted by Donna. W at 7:01 AM

Email ThisBlogThis!Share to TwitterShare to FacebookShare to Pinterest
Labels: Bonnie and Clyde