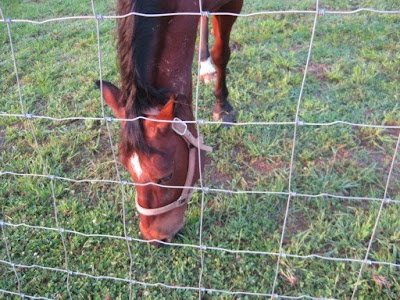 Weekend before last when we got home from our motorcycle trip to Branson, I noticed Blue was up near the house, standing in the closest corner near the shed under the Kentucky Coffee tree. He nickered a greeting to us, and I thought to myself what a wonderful, friendly boy he is.

Then every time I'd step out the door, he'd nicker again, still standing in the same spot; he was trying to tell me something. I mentioned this to Cliff, because such behavior is rather out of the ordinary for Blue, unless he's confined to a stall. So I headed toward him, stopped before I reached him, and held out a horse treat. He stood rooted to the spot, and I had an uneasy feeling that something wasn't right. He never turns down food of any kind... which is at the root of his problem.

I put a halter and lead rope on him, and found out he was limping something awful. I've been through this before, and I know founder when I see it.

I've had Blue for some five years; he just naturally has a "cresty" neck, which is a warning sign of founder (laminitis). I've put him on severe diets before; his neck stayed fat and cresty. So I pay little attention to that.

Founder usually occurs this time of year, when the grass is lush and growing. Still, all the years I've had Blue, he's been fine. The problem this year is that I so seldom ride him because of the pain in my knees. Combine lush pasture with lack of exercise, and laminitis rears its ugly head.

Some horses are just prone to the problem. The two horses boarded here do just fine, and they don't get any more exercise than Blue does.

I didn't call a vet, because I know the drill. And really, the only thing a vet could have done was give me some Bute for his pain and lecture me; this was on a Sunday, and I figured Cliff and I could pick up some Bute the next day without paying a veterinary for a Sunday call. So, I put Blue in a stall and started limiting his food intake severely.

By the next evening, Blue wasn't limping nearly as much. Within three or four days, you'd never know he'd had a problem. Thank the good Lord for that. 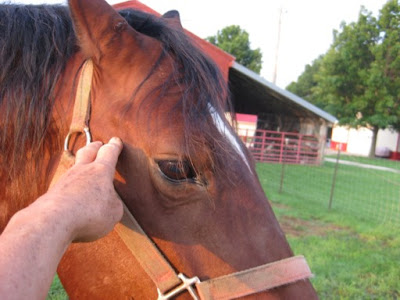 Blue stops picking at the short grass and lets me scratch his head.

Once a horse has foundered, his diet has to be managed, much like humans have to manage their diet if they are diabetic. This means that during spring and summer months, Blue won't be able to go out to the big pasture with the other two horses. In winter, we'll have to watch what kind of hay we're feeding, and how much of it.

I'm sure glad he kept nagging at me with his nickering. He was asking for help.

Added later: I rode Blue for a half-hour around the pasture and yard. He did just fine, although at first he was a little frisky, from being confined so much lately.
Posted by Donna. W at 7:06 AM

At least you caught it and did something about. Glad to hear that he is doing better.

Your Blue knows who to go to for help for sure. That was a close call. Too bad he has to diet, I know that's not a fun thing.

What a relief that he's better! Poor Blue. He knew you'd help him.