Yesterday morning Cliff saw a new ad on Craigslist for a John Deere with a cab.  The price seemed right:  It's a 2013 model (before regen came into play) with only 300 hours on it.  It was about 30 minutes from home.  Yes, we were looking for a Kubota, but the only reason we weren't considering John Deere tractors was because they usually are higher-priced.  Well, that, and the fact that we didn't really care for the way the latest models look.

When we arrived at the seller's home, it was obvious this man was pretty well-heeled.  The whole place was neat and picturesque.  I had Gabe along, and I hated to let him poop in a field near the barn, because even the field looked like something out of a picture.  He had two tractors, the same model; but the one we were looking at was the basic model, while the one he's keeping is a little fancier.  Both looked brand new.  He bought the tractor from a friend who was the original owner so he could leave the mower on it rather than putting it on and off his other tractor all the time.  He'd had it three years, and only used it for mowing; that's also what the original owner used it for.  The mower behind the tractor in this picture does not come with it, but the quick-hitch and tractor weights do.  And we have a mower anyway. 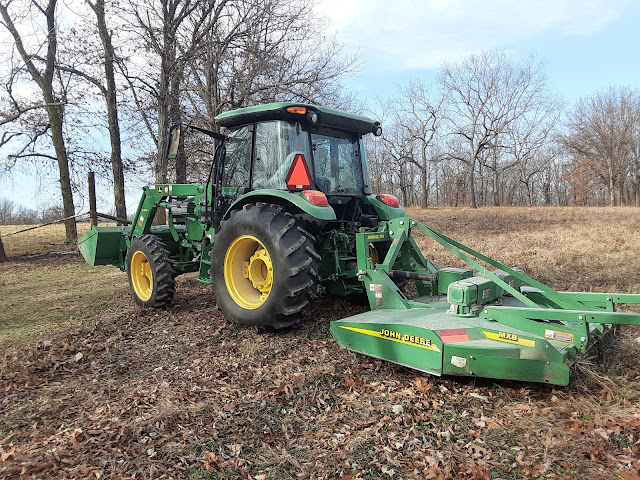 The seller was exceptionally nice.  I told Cliff I got good vibes from him.  (The field behind the tractor is where Gabe left his mark.)

So Cliff gets to take most of the money out of his tractor fund to get a cashier's check and he will be the owner of a tractor-with-a-cab.  The guy said the air conditioner in the tractor will freeze you to death.

Cliff would like to keep our "Little Johnny" for mowing the yard.  Considering it's a 35-horsepower tractor, it does a great job of mowing, except for the trim at the edges and around things.  This one wouldn't do as good a job of it; for one thing, the wheels would leave tracks.

So now the search will be over and Cliff will be broke for awhile, but I believe he will be very happy with it.  When I woke him up, I asked, "Well, are you scared, or are you happy?"

"Happy," he said enthusiastically.  "I've been playing with it in my head all morning while I was lying here."

Maybe 2020 isn't ending so badly after all.  I won a ring for Cliff (he wears it all the time), he found his tractor, and I quit spending so much time on Facebook and got back to blogging regularly.

It's funny how things turn out, isn't it?

P.S.  Cliff's been on the exercise bike where he can see out the window into the pasture and saw Blue kill two moles in a 15-minute period.  Good kitty!