Star of the East

According to the calendar it isn't winter yet, but it sure feels like it.  Not necessarily because of the weather, although it is in the low 20's this morning, but because I'm in the winter doldrums.  I've been on a roll since I stopped living on Facebook, blogging almost every day.  But now, I find very little to write about because I don't do much.  Oh for the years when Cliff and I were both so active:  I rode my horse along the Missouri River bottoms behind our place, taking pictures of my adventures.  When the weather was fit, Cliff and I would go for rides on our Honda Gold Wing motorcycle.  We'd ride to Branson, and sometimes down into Arkansas.  Boy, I had plenty to write about then!

Now the horse is long-dead and the Gold Wing is long-gone.  We only go to necessary places:  Walmart, doctor appointments, dentist appointments... and who wants to blog about that kind of stuff?  Maybe I should re-post my mom's life story that I serialized on this blog years ago.  Everyone found that quite interesting!

Because winter affects me as it does, I've started meditating again in the mornings to clear my mind.  It really is calming, to be able to dismiss any thoughts for a few minutes.  A thought comes to mind, I recognize it, then let it drift away for another time, like a pretty cloud in the sky.  Yesterday out of the blue a song came to mind, which I properly dismissed.  But later, after meditation, I thought of it again and managed to recall the title:  Star of the East.

I allowed memories inspired by that song drift over me, and I was a little girl again.  My mother was always making me learn some song or other when we lived in Iowa.  She must have thought I was a great singer, because I got volunteered quite a bit to sing at school functions or small talent contests.  I did love to sing; my parents sang all the time around the house, or riding in the car.  I'd join in with them if I knew the songs.  Daddy was particularly fond of "Lay that Pistol Down", not to mention a couple of mildly off-color songs he'd launch into enthusiastically out of the blue that caused my mom to say, "Oh, Everett" as though it was awful, only she was always smiling when she reprimanded him.  But I digress.

One winter Mother had me learn Star of the East so I could sing it at the Christmas program at Skinner School, which I attended for my first three or four years of learning, beginning with grade "primary" when I was five.  I guess Kindergarten wasn't part of the vocabulary in rural Iowa at the time. 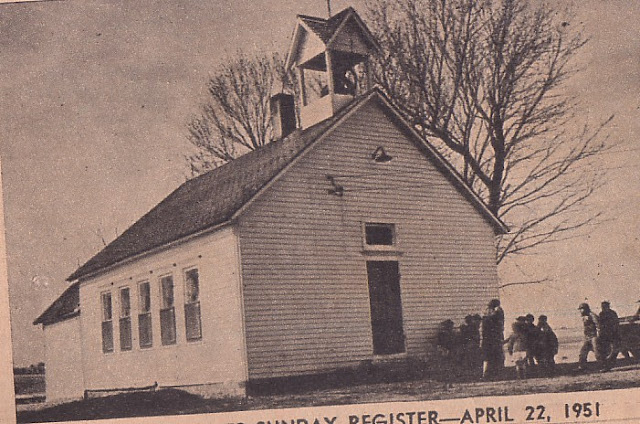 This article was obviously in the Des Moines Register on April 22, but that picture looks like it was taken in February, doesn't it?
I figured maybe the song was one of those "one-hit wonders", because I recall hearing others sing it a time or two at Christmas programs way back then, but never since.  My only connection with it was that I had to learn it and sing it somewhere.  I must have learned it well, because I still know every word of it, over 65 years later.
As I pondered the song, humming it to myself while I thought of the words, I became curious as to where that song originated.  It seems to me a very pretty song, although I had a bit of trouble with the high notes as a kid.  Why haven't I heard it since 1950?  It sure beats "Grandma got run over by a reindeer"!
The Internet has all the answers, so I surfed my way to Youtube where I found out Judy Garland recorded it in 1941.  But who wrote it?  When was it written?  To my surprise, I found out it was a hymn from the 1800's!  There was one bit added to the sheet music version from which I learned it: that's the part with the high notes that I had trouble with. 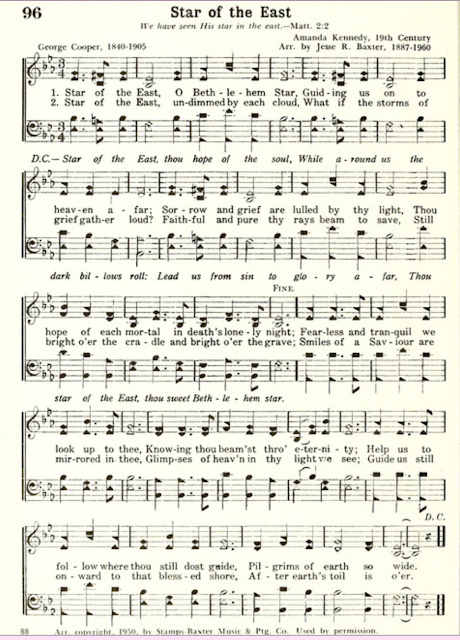 Judy Garland does the song superbly.  What a voice she had.  That's a high compliment from me, considering all I listen to is folk, country, and old hymns.
Posted by Donna. W at 5:18 AM