When Cliff came in from the shop at 5:30 yesterday evening, I told him I'd done a blog entry.  He's my proof-reader, and believe me, I need one!  However, he forgot to read my entry and I, too, forgot about it.  This morning I asked him if he read it after I went to bed.  Nope.  As soon as he ate breakfast though, he got right to it.  He caught a couple of things:  One was in yesterday's entry, and fixing it involved removing a photo of a tractor.  Why?  Because I thought it was a side view of the better tractor, and it wasn't.  It was the parts tractor that he's finished already and parked in the barn.  I couldn't find a picture of the good tractor, so I removed the wrong picture and a sentence I'd written.  The other mistake was from two entries ago, where I had typed "wrote" instead of "write".  Probably because I decided to change the sentence around and forgot one word.  As I told Cliff, everybody who intended to read this has already seen the flaws, so I'm just changing the errors for myself and him, I suppose.

Here's a funny thing.  I don't even drive a car; I know very little about the workings of tractors or anything else mechanical.  If I'm describing a tractor or if I explain something Cliff is doing to a tractor, it's because he's sitting right beside me telling me what to say, although I do sometimes re-word what he says.  Ever since he bought the parts tractor, and later, the tractor he intended to fix up, I've been confused.  They are both the same series of Oliver tractor and they're both old; they look alike to me.  But he'll say, "No, that's not the parts tractor.  It's the good one.  You can tell, because one's a diesel and one is gas."

No, that doesn't help me at all.  I've never paid attention to how you differentiate a diesel Oliver from a gas Oliver, and I'm busy trying to learn to write left-handed.  So I don't have time to take a course in tractors 101.  However, I do think I will know which is which at this point:

the parts tractor has flat fenders... 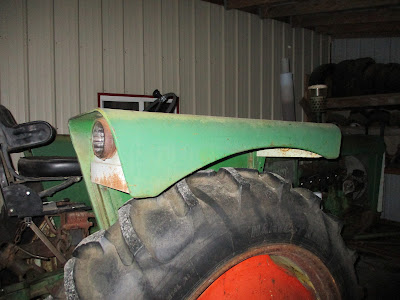 and the fixer-upper has curved fenders... 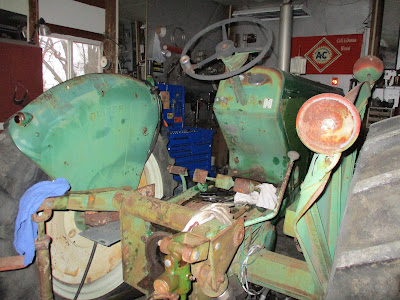 I can remember that!

There were times when I've gone back fifteen years in this blog to read an entry and found typos, so anyone who reads this mess regularly is probably used to my sloppy "style".  I'd never have made it as a secretary, that's for sure.  Or if I had, I'd be like Mrs. Wiggins.

Looks like it's going to be a gray day here.  We had some light rain this morning, but not enough to amount to anything.  I'll take it, whatever is sent.  The past two days have been perfect, so I won't complain about today.  I have things to keep me busy, and I believe I'll be able to do my full 30 minutes on the recumbent bike.

I've been writing in different sized fonts lately, wondering which is best for the reader.  I usually use bold when I'm done because long ago, some people thought the print was hard to read.  This time I didn't use bold.  I'd appreciate input from readers:  Does this seem too small to read comfortably?  Is bold a better choice, or should I abandon it?