A reader asked me to explain what a bobby calf is; I will, but I will lead up to it.
Dairies exist to produce all the milk they can.  In order for a cow to give milk, she has to have a baby.  Ideally, when she calves, the calf will be left with her for three days, or at least fed colostrum from her or other cows that have just had calves.  After three days, the cow joins the milking string, never to see her baby again.  Two or three months following, she will be bred.  Six to eight weeks before the next calf is born, she will be "turned dry", or "dried up", as my parents would say.  When the dairyman stops milking, she stops producing and puts her energy toward growing the fetus.
If the cow has a heifer (female) calf, the dairy will probably keep her and raise her as a replacement.  At the age of two or thereabouts, she will have her first calf and go to work producing milk, and the cycle goes on.
Half of calves born are bull calves, although with artificial insemination, is it possible to buy sexed semen, which produces 80% heifer calves.
Dairies have no use for the bull calves, so they are usually kept for three days and then sold.  In my part of the country, these little bulls are called "bobby" calves.  I've read that in other areas they are referred to as "bummer" calves.
What good are they to anyone else, you ask?  Well, they make fine beef if you raise them past a year old.  I'm sure many of them end up as veal, too.  For a few years I had several milk cows and no use for all that milk (I do love to milk cows, it's a fact), so a nearby dairyman sold me all his Holstein and Brown Swiss bull calves.  I'd milk the cows, put the milk in calf nursing bottles, and feed all my babies.  It's possible to wean calves at six weeks, but I found they do better if they can have milk for three months.  Once weaned, I'd feed them a mix of grains for a month or so and then turn them out to pasture.  We usually hauled them to the sale barn around the age of six months, and I made a pretty good profit with this enterprise. 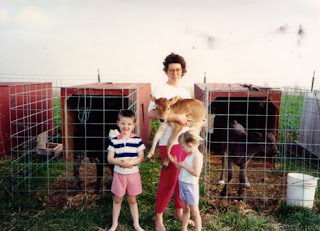 I raised the calves in individual hutches, shown behind me here; the kids are my two oldest grandchildren, Arick and Amber.
On to another cow subject, butter.  I posted a picture of my pretty butter on Facebook yesterday evening, and a friend asked if that was the natural color of the butter.  Indeed it is.  When cows are on pasture, as opposed to eating hay, their butter is more yellow.  Also, Jerseys and Guernseys don't convert carotene to vitamin A very efficiently; so their butter is especially yellow.