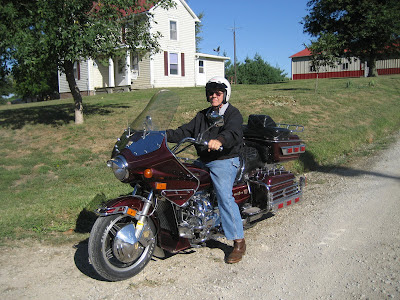 We had a 1996 Gold Wing that we enjoyed greatly. My husband, on a lark, suggested I put it on Craigslist for what I considered a ridiculous price. It sold, and we paid off some bills. There were several factors involved in the sale, one being that Cliff was having some light-headed spells. Another was the fact that every time you turn on the news or read the paper, a motorcyclist has been killed or maimed. Then there's our ages; Cliff says his reflexes aren't what they used to be.

Labor Day weekend as we listened to motorcycles passing by on the scenic byway in front of our house, we grew increasingly depressed about the situation.

So we went, last weekend, and bought a 1982 Gold Wing. We rode yesterday and today. Cliff says it's actually more comfortable, to him, than the newer one we sold. It's easier for him to handle. It goes half again as far on a gallon of gasoline. Cliff can do a lot of work on this motorcycle himself; the 1996 was impossible. All knowledgeable people told us, "Don't touch it yourself, you'll just screw it up," so it had to be taken to the shop for everything. Which seemed to cost $400 every time.

Now, for my part, I was having some trouble on this bike with one of my arthritic knees. I think I've solved the problem by taking along a cushion to sit on, so my legs aren't bent at quite such an extreme angle. At least it worked fine today. The seat isn't quite as comfy, but the ride is every bit as smooth as on the model we sold. We can't go as fast... 80 MPH is the highest the speedometer goes... but I don't like going too fast anyhow! 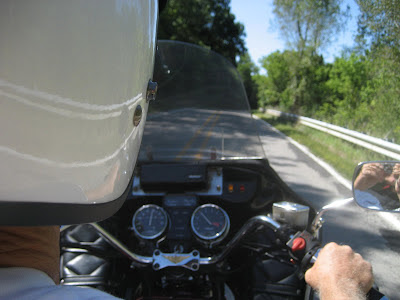 It's nice to be back on the road again! 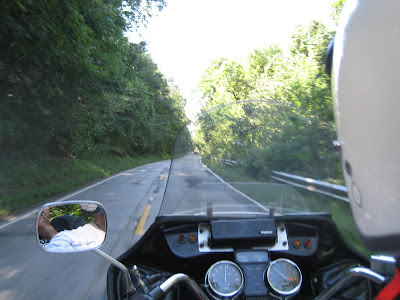 I think we can live with this old bike just fine!
Posted by Donna. W at 1:54 PM