It's another perfect September day, one more harbinger of Autumn, a repeat of yesterday.  It will warm up again for a week or so, then cool off again; we are only ten days away from the first day of fall. 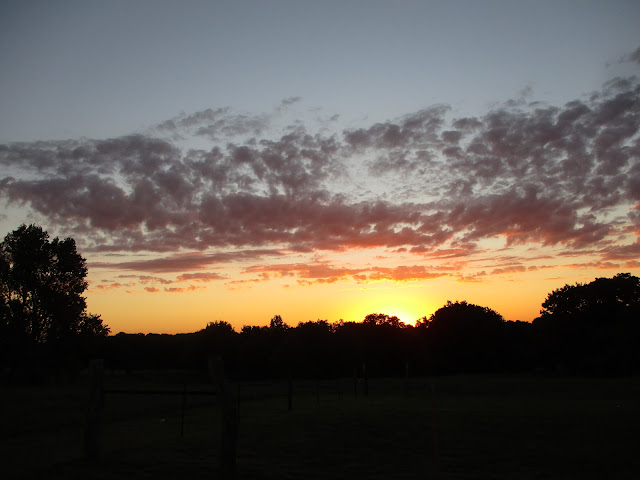 When I stepped out on the back porch to feed the cats, this lovely sunrise greeted me.

Yesterday the chill in the air made me think about steel-cut oats, so I made enough for yesterday and today.  I had forgotten how much I liked them, not having had them since early last spring.  I like to add chopped apple, cinnamon, and raisins or sweetened, dried cranberries.  When I buy the five-minute kind I cook them in a pan on the stove, but I cook the traditional ones in the Instapot.  They are so much better than oatmeal.  I've been thinking about chili too, but I'll wait until the next cool spell.

We haven't been doing many things with the tractor club this year, but we are planning to participate in the Higginsville parade Saturday with some of our group.

Today I'm making chicken jambalaya; don't get excited, it's the easy low-fat, lower-fat version that any true Cajun would likely throw in the garbage disposal, but we happen to like it.  We'll have a bowl of ice cream for dessert to make up for the lacking calories and fat.  We'd hate to lose any weight.  Ha!  Oh yeah, I'll fry some okra too.  I bring in an ice-cream bucket out of the garden every other day, so I throw a lot of okra out after I pick it; I've thought about putting something on the Facebook community board offering okra free to anyone who is hankering for it.

Another song from my past came to mind as I was walking this morning:  Around 1960 we lived in Kansas City, North, in a subdivision named Crestview.  Both my parents worked, so I had the place to myself on those long, leisurely summer days.  There was a boy next door, probably three years younger than I was (I was16), who practiced piano every day, working on one song over and over.  Because we didn't have A/C, and neither did that boy and his mom, I could clearly hear him playing that song.  It fascinated me; I couldn't get enough of it!

So of course I looked it up on Youtube just to hear it again.

Enjoy the song, and enjoy your day.