What a strange situation

My faithful readers know that around here, tractors are a big deal.  I won't even drive a tractor, but thanks to my husband's enthusiasm for them, I've learned to love the old antique and classic models myself:  You can drag an old, rusty Farmall with rotten tires that hasn't run in thirty years out of a weedy fence-row and, with the proper tools and knowledge, make it born-again; when that thought settled into my brain, I was hooked.

It is with surprise and a little sorrow that I now tell you that Cliff has lately sold every restored tractor on the place, including Big Ollie, the 1855, crowning glory of his collection.  He's also been selling various implements he doesn't need any more.  We may as well forget about the antique tractor club.  However, there is a method to my husband's madness.  Besides, when you get right down to the nitty gritty, the tractor hobby has been his, and I'm just an observer.  Ever since I told him to keep the money from any machinery and tractors he sold, it has truly been a self-supporting venture; this makes it none of my business what he does with his money.

He will often sell a tractor, then buy another one or two, but I thought the Oliver 1855 would be the last one he'd ever sell.  He priced it fairly high because he didn't really care whether he sold it or not; he likes the old monster.  We put ads on Craigslist and Facebook Marketplace, and listed it on a Facebook Oliver-and-White Tractor group.  A few people called and messaged about it, the kind of folks Cliff calls "lookie-loos":  They only call to talk about tractors; they might even come to look at the tractors, usually older men who remember one they grew up with, and they still love the rusty (or restored) beasts of yesterday's farms.  Cliff enjoys talking to them, but he knows from the git-go that they aren't buying anything.

Big Ollie hadn't been listed long when Cliff got a call from North Dakota; it was a man interested in the tractor... but who is going to travel from North Dakota to central Missouri to buy a big tractor like that?  We've never had any way to haul the beast ourselves, so we could only take it to nearby parades and tractor shows... by "close" I mean within 25 miles.  Have you ever traveled 25 miles on a tractor?  Take my word for it, it's a long, slow drive.  He used the tractor on occasion for mowing or plowing, because it isn't good to leave tractors parked too long.  It's a matter of "use it or lose it".

The guy from the north country wanted the tractor, but he also wanted a lower price; Cliff was not going to sell Ollie for any less that he was asking, but he came up with a compromise:  He would lower the price if he could keep the canopy and the weights that were on it.  The buyer was willing to do that.  He's finally found a trucker friend to haul it for him, and he'll be here this week sometime. 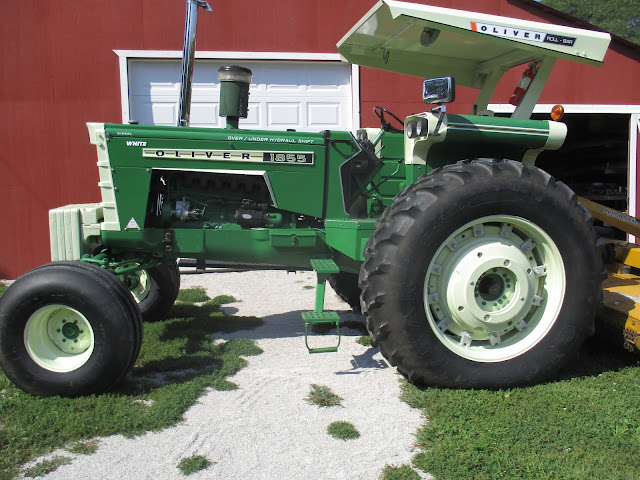 Cliff had me list the canopy in the online ads (the canopy is the thing overhead that shades the driver and also serves as roll-bar to it to keep him from getting smashed if the tractor rolls over on a hillside).  Getting the canopy off required some help from younger men, but they succeeded in their efforts.  He also had me list the weights.  Within 24 hours, all the stuff was sold to one buyer; after the buyer loaded the weights and canopy on a big trailer, Cliff showed him our one remaining classic tractor, the 550 Oliver.  This man liked it, had my husband put a price on it, and loaded it up with the rest of his purchases on the trailer; Cliff said the guy got it for his grandson.

Oh, and Cliff made more money on the weights and canopy than he would have if the buyer of the 1855 had kept them.

So now Cliff isn't looking for another classic tractor, he's wanting a different farm tractor to use as his work-horse around here.  He really enjoys his little John Deere, but he's always wished he'd gotten one the next size bigger.  He'd like to find a used John Deere like that... the newer type of John Deere like he has now, made of plastic instead of iron, but bigger.  One of his friends told him to be sure to get one with a cab, but when Cliff puts his money together, I doubt he'd be able afford one with a cab; but we'll be looking around.  He will look at Kubotas, too, because they're good tractors.  We'll start at the dealers but no doubt end up buying something from an individual.

Cliff says the search for a tractor is just as much fun as actually having one.

Just so you know, he does have two ratty old Olivers sitting in the wings that really need some TLC.  It isn't over till the fat lady sings.

And that's it for today.