Remember my problems with the DVD player last weekend?  Some of you thought the problem was with the DVD's themselves, figuring I needed to wipe them off in case there was dirt on them.  I didn't do that, since the silly player did the same thing with every DVD I loaded into it.  Yesterday I put "Little Big Man" in it and let it play; I wasn't really watching it, had the sound almost off, but I wanted to see if it would play the whole thing.  It did.  Apparently the thing just needed to be used, and that good old country music on the Country's Family Reunion DVD I put in it last week was just the ticket.  I don't know what to tell you; strange things happen, especially when I'm involved.

Mama Kitty has always been a hunter; if you want to see her in action, check out this blog entry from 2012, when she gave her final litter of children a hunting lesson.  These days, it seems she only hunts moles, although I'm sure she wouldn't turn down a baby rabbit.  When we look out the north window into the pasture we often see her waiting patiently for prey.  And, typical cat, she has been known to leave a mouse or mole on the front porch for me.  Mama Kitty is soft-spoken, and meows almost in a whisper.  I was sitting in my chair near the front door yesterday and heard a cat meowing loudly a few times.  Mama Kitty's one remaining son, Jake, is a loudmouth, but he and Buttons, another cat I wasn't too fond of, left us for some reason.  Still, Jake shows up in the barn every couple of months, eating our dry cat food.  I could have sworn it was his voice I heard on the porch, and even told Cliff, "Well, I guess loudmouth Jake decided to bless us with his presence."

Imagine my surprise when I opened the door and saw the usually reserved Mama Kitty there with a mole laying in front of her.  She looked up at me, meowed (in her typical whisper instead of a yowl this time), and poked at the mole with her nose, then looked back at me.  I understood she was proud of it and wanted me to have it, so I stepped out and stroked her and told her what a great hunter she was.  I picked up the mole by its tail as I petted the cat, then put it down and told her I'd already had breakfast.  She stared at me.  Since Blue was there, I offered the mole to him, but Mama darted quickly over and snatched the mole before he could pick it up, then started playing with it as though she was a kitten again, even to the point of batting it off the porch and jumping down into the yard to continue her game.  That old cat amazes me at how much fun she seems to have since I began feeding her a tiny little packet of wet food every day.

Our wonderful weather is in the process of changing.  It's cloudy today and supposed to rain this afternoon.  Even so, the highs are forecast to be in the 50's for the next week, which isn't so bad for November.

I couldn't find anything I wanted to make for dinner (that's the noon meal here, because I was raised around country folks), so I went to All-recipes.com to find something different to make with ground beef.  I found a recipe for Spanish Rice Bake, saw I had all the ingredients, and read some reviews.  I noticed several people mentioned there's no need to dirty up three pans and put it in the oven, because you can make it in a heavy skillet on the stovetop; so I took their advice.  One ingredient I didn't have was chili sauce, but I googled "ingredients in chili sauce" and found out I could make a cup of it with tomato sauce, brown sugar, allspice, and vinegar.  It puzzles me they call it chili sauce since there's no chili powder in it, but the final casserole was delicious.  I had to make twice as much chili sauce as I needed in order to use the whole 8-ounce can of tomato sauce, but I put the rest in a half-pint canning jar and froze it to use the next time I make this stuff.

Here's a picture I took four years ago of the horses that were boarded here.  It made me smile to see it. 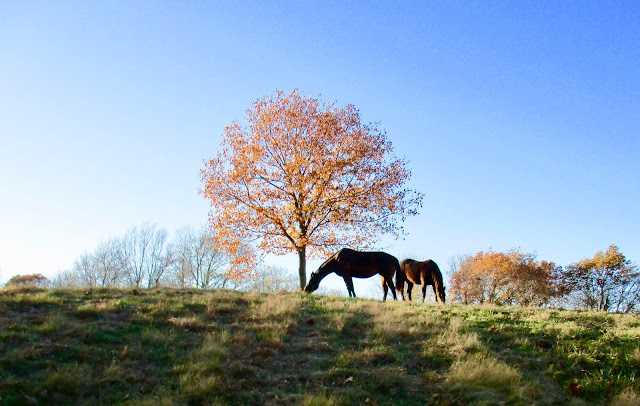 A month or so ago I ran out of Lipton teabags and put it on my shopping list.  However, Walmart didn't have any single Lipton teabags.  I'm used to shortages now, so I wasn't surprised.  The only other individual teabags on the shelf were the Great Value brand, so I bought a box of 100.  They weren't awful, but the tea was weak.  I hate to throw something away when I paid good money for it, so I began using two of the teabags for one cup of tea; that was better, although the taste still wasn't as good as Lipton.  Yesterday I used the last two teabags out of that box and happily opened a the Lipton tea, which I finally found on Amazon for the normal price.  I had to stop drinking coffee when I had that bout of stomach problems, but I still buy it for Cliff.  I honestly haven't missed it much at all.

OK, enough of this drivel.  I have a hot cup of tea sitting next to me and two books on the iPad to read.  Oh, and a whole cabinet full of DVDs I haven't watched in awhile!

I'm glad they're hurrying up with Covid 19 vaccine.  I'll be getting mine the minute they tell me it's available.