My dad was left-handed.  When we had company, Mother always told him to sit at the end of the table where he wouldn't be next to anyone, because lefties tend to bump elbows with right-handed folks if they are side by side.  I vaguely recall my mother talking to the teacher on my first day of school when I was five; she told Mrs Eighmy I was left-handed.  My teacher asked if she should try to get me to use my right hand, and Mother said something to the effect that it might be a good thing, because left-handed people are "awkward" at many things.  I have terrible hand-writing, and I've always wondered if it would have been neater if they'd let me use my left hand, although I don't really believe that; I think my laziness causes the sloppiness.  Cliff calls me "Lefty" even now, when he sees me doing something in a left-handed way.  He says I do many things left-handed, but I'm never aware of it until he tells me.

So lately a thought has occurred to me:  I wonder if I could re-learn to use my left hand?  It wouldn't be of any use at this age unless I broke my right hand, but the thought intrigued me.  But if I re-learned it like a kindergarten kid does, just writing a lot until I got better at it, would it be possible?  Yesterday I sat at the table and gave it a try.  It was pretty awful. 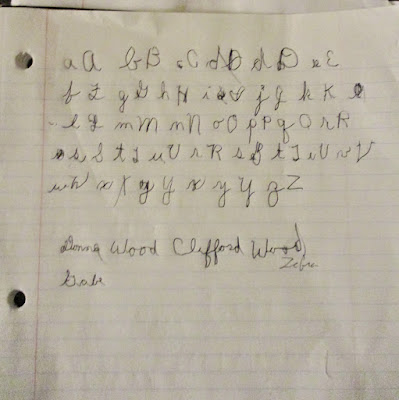 I imagine this took me at least ten minutes, and it's sloppy.  When I showed it to Cliff, though, he was impressed.  "I couldn't have done that," he said.  "But why are you doing this?"

"Because I was born left-handed and they took it away from me!"

I said that with a smile, but there's some truth in it.  When I read this article about left-handed presidents, these words stood out:   "Some scientists believe that left-handed people are capable of 'a wider scope of thinking,' a theory that explains the high percentage of Nobel Prize winners, writers and painters who are left-handed."

See there?  I was robbed!  I might have won a Nobel prize if they hadn't made me change.  I am going to continue practicing my lefty writing, just to find out.  I'm kidding, of course, but it's a project I can do while quarantining.  So I will pursue it for a while.

On another topic, when I began reading "The Story of Edgar Sawtelle", I knew I was going to enjoy it, so when Cliff asked for a book to read when he rides the recumbent bike, I got the same book for him.  Yesterday he mentioned an incident that took place in the book and said, "That's ridiculous... that would never happen."

My first thought was that it's just a story, not a biography.  But I knew it was time for him to switch, because I'm chapters ahead of him; in some places it does get sort of weird.  I'm about halfway through it and still enjoying it, but I have more imagination than Cliff.  It gets kind of sad in places, too, and he doesn't like sad books.  I understand his problem with things in books that could never happen, because I don't like vampire tales or books about witches and ghosts.  That's why I don't read very many Steven King stories, although I love the movies "Christine" and "The Shining".  I never had the least desire to read the Harry Potter books.

So I searched for a different book for my husband and stumbled across one I might want to read myself:  "Sold on a Monday".  I do wish he could check out his own books, but he can only judge them from the title.  I always check Amazon to see the reviews and find out what the book is about; then I go back to the digital public library, which is about the only way to get a library book these days, and get the book on his iPad.  He isn't that fast a web-surfer, so it would be a lot more effort for him to do that much googling and surfing just to find out what sort of book it is.  He'd probably get lost in the process.

That's all I have for today.  Make it a good day if you possibly can.