We had a nice little Christmas around here

Last weekend the oldest granddaughter and her mom came to visit.  At some point, Amber asked if I was planning anything for Christmas.  When I told her I was not, she seemed disappointed.  I haven't been feeling the greatest some days, but I decided maybe I should do something, since someone was asking.

"I guess I could make you guys some chicken-and-noodles and mashed potatoes," I said.  "I just don't want to do a bunch of casseroles and fancy desserts and stuff."

My ex-daughter-in-law and granddaughter could happily live on nothing but noodles and mashed potatoes, and said that would be great.  As Christmas approached, I wondered if the other local relatives had plans; in the past, some of the family had to show up at two or three Christmas dinners on the same day, which took a lot of fun out of the whole thing.  However, my main problem was that I never know these days how I'm going to feel when I get up in the morning (nothing serious, just acid reflux that isn't responding well to any treatment).

That, and I have absolutely no Christmas spirit left in me.

Tuesday morning I awoke feeling pretty decent and decided I'd better invite all family living in close driving distance of our place.  In which case, I knew I'd better round out that meal of pure starch a little bit.  I made the barbecue meatballs that were such a hit a while back, green beans, a simple Jello poke cake, and one pumpkin pie.  I believe that was the whole meal.  I sent word out to the troops, and yesterday, Christmas day, we ended up with thirteen people, all adults.  Because it was spur of the minute, I didn't ask anybody to contribute any food.  I don't think anybody left hungry, though.  Oh yeah, I made cinnamon rolls early in the day and we had those for breakfast around 9 AM.

Almost all the food was gone when it was said and done, and I sort of kicked myself for not making a couple more dishes.  But it went well for a spur-of-the-minute affair, and we had people around us all day.  That must have been good for me, since I'm feeling pretty good today.

The grandson took all of Christmas week off, and he and Cliff have been working on the inside of the barn they're remodeling every day in unbelievably warm weather.  I hardly saw Cliff except at mealtime and after the sun went down up until yesterday.  He hasn't worked this hard since he retired!  It's good for him, though.  The grandson keeps him motivated in doing things, so he isn't sitting out the winter inside the house (like I am, except for my walks).

I told Cliff I haven't blogged in almost a week, and he suggested I take some pictures of their barn project.  They've done some pretty heavy stuff in the past few days!

They've poured concrete across the back inside of the barn and are working on pouring the sides.  Cliff tells me those low concrete walls are called stub walls.  They are using pretty primitive methods to do this:  It involves Cliff running his brother's concrete mixer and Arick carrying concrete to where it's needed in a bucket.  Hard, heavy work. 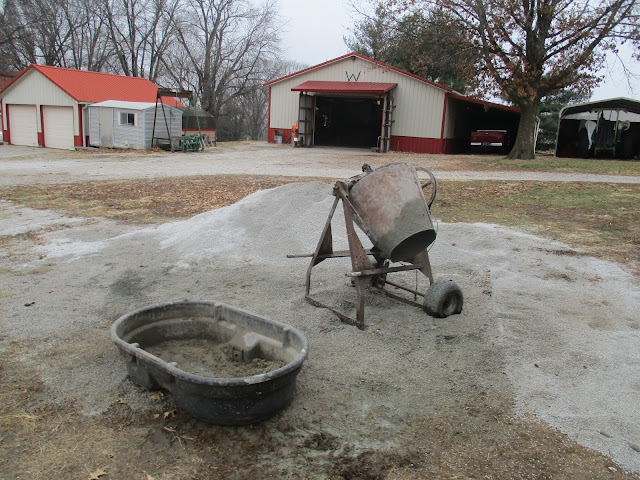 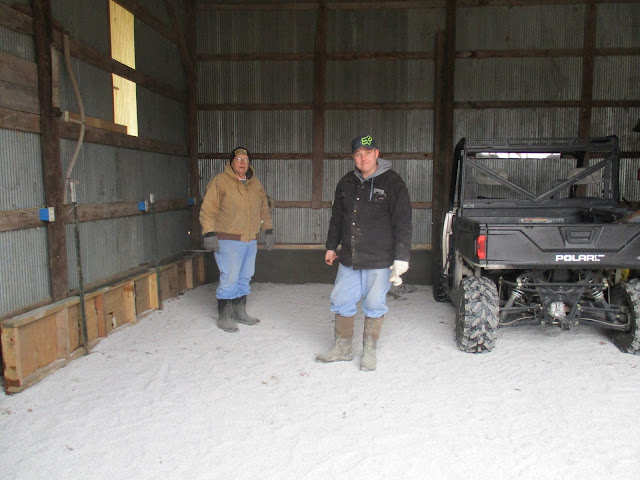 This is what I saw when I went out to take some pictures.  As you can see by their clothing, the warm weather has left us.  The guys think it'll be OK to pour a little more concrete today, though; the low tonight is supposed to be around 30; then it will warm up again.  This job is slow-going!

The plan is to put a concrete floor in the shop, and then Arick intends to put a two-post asymmetric car lift to make it easy for him to change oil and work on cars.  (It ain't cheap, folks, but the grandson thinks it'll be worth it.  Doesn't cost me and Cliff a dime, so it suits me.)

I finished John Grisham's book, "The Reckoning", in record time.  I believe it's my favorite of all his books I've read so far.  Reading the reviews, though, I see a lot of people didn't like it.  Different strokes for different folks.

That's all the news from around here that's fit to print.  I bid you peace.