I'm not cut out to be a football fan

I've never paid attention to football in my whole life; I have zero interest in that game, or any other, unless we're talking about high school games, but only if it's a school I care about.  I've always wished Kansas City had a decent football team, though.  I don't know why I care, but I do.  Every year finds me hoping they'll have a good season, just once in my lifetime.  They made the Super Bowl once, back in the very early days of the team.  But Cliff didn't even like football back then, so I was clueless.

Then, out of the clear blue of the Texas sky, came Patrick Mahomes.  Suddenly they were contenders, and the whole team was magically transformed into a group of incredibly skilled, coordinated players!  I still don't understand the game of football, but I try to watch every Chiefs game this season.  Here's the problem:  If the scores are close, and our opposing team gets within two points of our team, I begin to get cold feet.  Instant depression hits and I avert my eyes from the screen whenever it appears the opposition is about to catch up to us.  If they do catch up, I pout and stop watching the game entirely.

It's just too much stress on my aging system.  The constant worry that Mahomes will get hurt so badly his career ends makes my stomach churn, although I remind myself maybe he could switch careers and play baseball if he was too broken to be an effective football player.  Then I'd have to watch a series of slow, boring baseball games to see him in action... if you can even call that "action".

But enough of my Monday morning thoughts.

I spent a little more time doing searches at Newspapers.com:  I find it funny I can search out small-town newspaper articles from around Taylor Country, Iowa, and find my parents and sister mentioned many times.  But Cliff's family, originally from Versailles, Missouri, stayed out of the limelight entirely.  I can't find his relatives down there mentioned.

The things my family got in the paper for. though, were far from remarkable.  Here's an example: 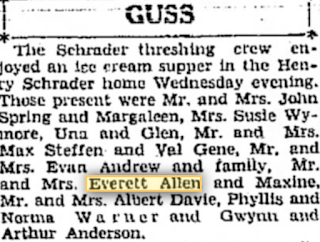 That's obviously before my time, since only Maxine was with them.  My parents never in their lives left me with anybody else until I was twelve or so.  I went to every Gospel meeting, Sunday School, fourth-Sunday singing, basket dinner, and funeral that ever took place in my parent's lives.

Oh, as a side note, the "Margaleen Spring" mentioned is where my mom got my middle name, Margaleen, which I hated all my life until around sixth grade when I realized I never had to use it anyhow.  If asked for a middle name, I just gave the initial.

Here is an article, printed February 10, 1944, in which I'm not mentioned because I hadn't been born yet; I made my appearance on July 7, 1944.  But I was there, and when you read it, you will realize this is just one more reason I'm lucky to be here.  I don't remember ever hearing this story, although I'm sure I did.  Mother left no interesting stories untold.  That's my favorite thing about growing up in her care... the stories and family history she related to me as a child. 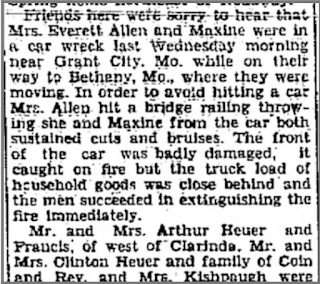 Our little girl is visiting us, so I wanted to get this blog entry in.  My work here is done.