In the wee hours of the morning, I began thinking about Little Jimmy Dickens, who died in 2016 at the age of 94.  This took my peripatetic mind on a winding trip back to my early childhood, a safe and happy time of my life.  Sometimes I wish I could go back to those days and stay.

Mother purchased an old-fashioned wind-up Victrola record player from a one-room country school that had been consolidated with a larger school district.  I'm sure she didn't pay much for it, because my parents didn't have a lot of money.  She and Daddy placed that fine-looking piece of furniture in the living room, against the wall on the opposite from the stupid piano Mother had so hoped I'd learn to play.

The Victrola came with quite a large collection of 78 RPM records, the only speed the turntable had; the records were as old as the player... raspy, scratched, and old-fashioned.  One such record was just a bunch of folks laughing:  It started out with one guy, then little by little others joined in.  I was fascinated by the fact that if you listened to it, you couldn't help but laugh along with them.  When kids came to visit, I played it for them because it made us all laugh together.  There was also a record with Indians singing and drumming to a native song, which I loved (because I liked Indians).

The needles had to be replaced often; you bought several of them in a package at the local hardware store.  I remember this because I knew how to do it all myself.  I don't remember my parents ever actually listening to the Victrola, although I'm sure they must have.  But I played it a lot!  I remember turning the crank that made the turntable go around, with no electricity involved.


I guess my parents must have listened to it, because Mother came up with the extra money to buy two brand new record albums.  An album back then held five or six two-sided records with a song on each side, in thick paper sleeves.  The album opened like a book and you would choose the record you wanted to hear. 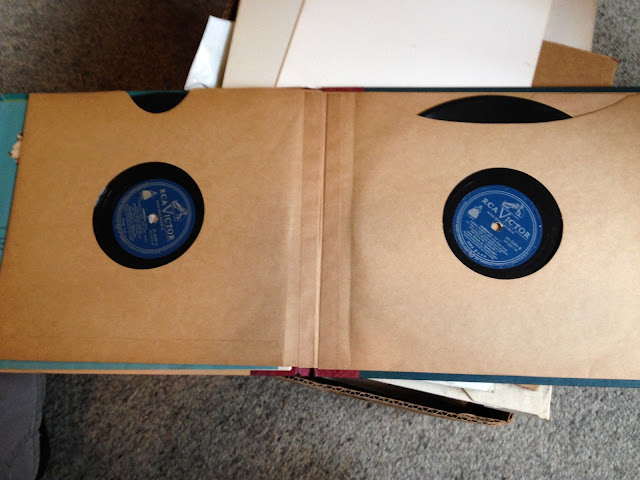 Now that I think of it, my mom may have bought the albums so she could write down the words for me to learn, because this was the same time period when she was always putting me in local talent shows.  Some lady played piano for me when I sang at these functions.

I remember the songs in those albums well.  George Morgan was the artist on one:  he sang about candy kisses and rooms full of roses (his daughter Lori grew up to be a country artist, years later).  I liked George's smooth voice just fine, but I preferred Little Jimmy Dickens' album because his songs made me laugh.  I especially liked "Plain Old Country Boy", in which my favorite line was this:  "All I got was the north end of a chicken flying south."

The Jimmy Dickens song that stayed with me for life, though, was "Out Behind the Barn".  It was one of the first country songs I learned to chord with, after I got a guitar; it made people laugh when I sang it, too.  The title may have been an omen, because Cliff and I now live "out behind a barn" in a trailer house.

I looked online to see what years those songs would have been on the charts; the albums were probably put out in 1949 or 1950. because the songs I remember so well were on the charts in 1949, when I was five years old.

At that time, 78-RPM records were about to go the way of the dinosaur.  But I got a few years of pleasure out of them.

What a great childhood I had!  Even today it makes me smile, thinking about those times.

On another note, good news!!!  Cliff went to the cardiologist yesterday to find out the results of his recent tests, which he passed with flying colors.  The only advice he received was the usual "You need to lose weight", followed by "I'll see you in six months".

I told the doctor the only measure we take to help Cliff lose weight is portion control.  We hope for weight loss, but it usually turns out to be "maintenance":  If he doesn't gain weight, we count that as a plus.  Then I told him, "Honestly, I am not going to tell him what he can and cannot eat; I am NOT his mother.  If we stick to low-fat stuff we miss the foods we love, and end up going out splurging to get something that tastes only about half as good as something I could have made at home."

He chuckled a little and said, "These days I'm fighting weight myself," as he patted his not-that-big tummy.

On the way home, Cliff put it this way:  "I figure at the outside, I have five or six years left.  I don't intend to diet all the way to my grave."

We're happy and thankful that his heart is still doing pretty well, thirteen years after a four-way heart bypass.  But we'll be eating biscuits, corn bread, and even PIE occasionally.  Not every day... but we will eat what we love.  I do round out meals with a lot of vegetables and fruits, good healthy ones.  So there's that.  I know folks who hardly ever eat a vegetable, but I guess that is another thing I learned from my Mom, who once told me in regards to food, "I like anything that grows in the ground."

Thank God for Aldi, where fresh fruits and vegetables are reasonably priced.

PS:  Further research tells me 78 RPM records were still made as recently as 1960.  I was listening to 45 and 33 1/3 RPM records long before that, as was everybody else I knew.  Around 1956 I received my first portable stereo record player for Christmas.  From then on, I went without my school lunches so I could buy Elvis records with my lunch money.