What's missing in this meal? 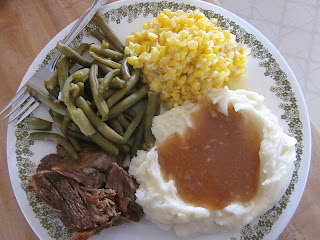 That's today's dinner, our noon meal.  The chuck roast is part of good old Clyde, may he rest in peace, and the corn was frozen from last years garden.  The green beans are store-bought canned ones.
Because Cliff loves mashed potatoes, I try to see that he gets some every couple of weeks or so.  Although this may not be the healthiest meal ever, let me tell you how it is different than it would have been in 2005, before Cliff had open heart surgery.
There should be home-made rolls in the picture, or at least some good baking-powder biscuits.  In the old days there would have been; unfortunately, both of us would have had two or three of them, and that would have doubled the caloric intake at dinner.  Cliff is allowed one slice of bread, though, on the rare occasion that a meal like this one seems to require it.
A few years ago corn would probably have been the only vegetable on the plate.  Or maybe some creamed peas.  I really push the vegetables these days, and I serve most of them plain.
Six years ago Cliff would have filled his own plate, and when it was empty he would have gone back for seconds.  I fill his plate now and seconds are against the rule, and he seems to be content with that as long as he gets some mashed potatoes once in awhile.
This meal needs a dessert in the worst way, and in the past I would have baked an apple pie and served it warm, with ice cream.  We still have apple pie and ice cream on occasion, but I only serve that sort of fattening dessert when it follows a low-calorie, healthy meal (unless we have guests for dinner).  So today we had a half-cup of vanilla ice cream with half a banana, and a little chocolate drizzled over it, for dessert.
What I'm getting at is this:  While nutritionists might say this meal isn't part of a sensible, healthy diet plan, all I can say is that our eating habits have improved from six years ago, and our meals are something we can live with.  I figure any improvement is better than nothing.  We're not losing any weight, but we aren't gaining.
When there comes a year that we don't have a yearling calf to butcher, we'll be eating a lot less meat, but right now it's available and free.  So we are partaking of it frequently, for better or worse.
I sure did enjoy dinner today.
Posted by Donna. W at 2:20 PM

Looks like a nice HEARTY meal. And yummy too. Though if I visited I wouldn't want to know that was CLYDE. LOL We never have seconds here either. We seldom if ever have dessert here too. So I hear what you're saying. But every now and then it doesn't hurt to splurge. Your vanilla ice cream with banana and chocolate has my mouth watering for some. LOL Take care.

I'd say it is a healthy meal. Sometimes I think folks go crazy about what they think is healthy. I really don't eat bread the way I used to either, but I do love it. Most meals I do without. I rather have a well rounded meal and less of it if I had to choose. I think it's great that the two of you are doing so well.

LOOKS YUMMY TO ME!

Every stride forward, to better health, is a stride made. For our family even this type of meal is a rarity... too many carbs (corn & potatoes) for our way of eating. Probably would have had the meat, the green beans, maybe some sliced tomatoes & a big plate of fruit salad for dessert.

But that's ok... we can't all be the same. The world would be rather boring if that were the case.

Good for you both! It's nice to see some people who understand food and nutrition and moderation. That's all it takes, really and you can still definitely enjoy life and good food.

What's missing is me! Yum!

it looks good, I haD a set of plates like that once on a time in the 60's I got them in california,mine were corelle.

My husband is a meat & potatoes man. He loves both and would eat them every day if I would let him. He loves biscuits too!
Have a good night.