I fell in love yesterday

I didn't take a picture of my new love interest, but I wasn't expecting to fall in love with him; I was just along for the ride.
My oldest grandson and his girl friend have been looking for a Great Dane puppy.  We were discussing this with them out in the shop Sunday, and Cliff said, "Phil's boy had some Great Dane puppies for sale a while back."
Phil is Cliff's brother.  His son, Jeremy, indeed had been selling some puppies, although I figured by this time they were all gone.  So I went to his Facebook wall and asked if he still had puppies.
"I'll message you," he said.
He had one black, eleven-week-old puppy left.  I got him connected with Heather, and they made a date for her to see the pup after work yesterday.
Because Cliff's brother lives in a rather isolated location, Heather asked me to ride along and show her where they lived.  Her car is small, and I wondered if I'd be in charge of controlling a moose-sized pup for the twenty-mile trip home, but I agreed.
When we arrived at their farmhouse, Jeremy and his girl friend were in the yard with the pup running freely around their feet.  OK, so he hadn't gotten to moose-size yet, but his feet had!  I got out of the car prepared to fend off a jumping puppy, but he didn't jump on us.  When we walked, he'd follow along beside somebody's (anybody's) feet.
Heather and Jeremy sealed the deal and discussed shots and wormings and dog food and ear surgeries, and we went to load Titan into Heather's little car.  I volunteered to sit in the back seat with him and restrain him; I started to lift him in, but he was heavier than I realized, so Jeremy got him loaded, and I followed.  This back seat was tiny, so I stretched my legs across the back floorboard toward the other door and the pup immediately nestled onto my lap.  Well, he nestled as much of his growing body as would fit on me, anyhow.  And for the whole trip to my house, he stayed right there, every once in awhile trying to snuggle in a little deeper.  Several times he lifted his head, looked me in the eyes, and doggie-smiled, as if to say, "I really like you."
But he never once licked me.  I don't like licking dogs, so that was another plus.
Yes, by the time I got out of the back seat with my newfound love, I was hooked.  I never saw that one coming. 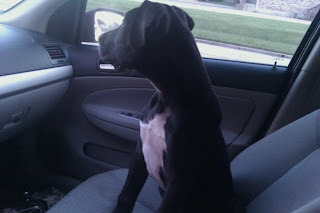 Here's a picture Heather took of him on her way home from here.
Posted by Donna. W at 10:11 AM

Grand dogs are almost as much fun as grand children. I have lots of them and they all love me as much as I love them too. Now that I don't have any of my own I really feel blessed to have them. Most of my kids have at least 2 so there are lots of dogs in the family.

What a sweet dog. No wonder you fell in love.

I've always wanted a Great Dane but we have pretty much stuck to German Shepherds (and one Golden Retriever) Danes are really sweet.

Awww, I'm in love too! What a sweet puppy-moose!

He's a beautiful pup! Isn't it just the best thing ever when they really take to you? Better than any psychologist or tranquilizer. M.

I had a friend in Baton Rouge, LA,that raised great danes. I used love to go and visit him and his wife. He had eight danes at the time and it felt like walking in the land of giants. It was amazing to watch them gallop in the huge back yard with a 12ft fence around it. They looked like they were running in slow motion.

I have never seen a Great Dane puppy. I hope we get to see more of him. I would be in love too.