Tuesday, my inside-outside cat Blue came in limping horribly.  He could barely stand to touch his left back foot to the floor, and limped pitifully when he went into the kitchen to get a drink of Gabe's water.  When he laid down, I looked his leg over and found no scars, bites,  or blood.  I told Cliff that if he was the same Wednesday morning, I'd call the veterinarian.  That night I carried him to the front door, lifted the top of his igloo house, and gently laid him in his bed.

Yesterday morning, Wednesday, he was nowhere around.  I called for him, but had no luck.  I told Cliff, "My heart is heavy, but I'm not going to cry.  I will tell you, though, that we aren't going through this again, this business of getting a cute little kitten, falling in love with it, spending money for neutering and all the other expenses, only to lose him."  I felt guilty for not listening to my husband, who had offered to put some oil-dry in a litter-box and put it in the pack porch where Blue would have been safe from harm.

I went out for a walk with Gabe later and noticed him sniffing at something on the back deck; I looked to see what he was smelling, and I saw what looked like two bloody paw prints.  Cliff agreed that's what it looked like.  We figured some dog or coyote had taken advantage of the situation, grabbed Blue while he couldn't run, and hauled him off for supper.  Every once in a while I checked the cat's igloo house on the front porch, but it remained empty.

I knew I wouldn't sleep well last night, so I took an over-the-counter sleeping pill.  I did pray that whatever happened, my cat didn't suffer.  I was positive he was dead, and I told God, "I don't have much faith that I'll ever see him again.  It would be a miracle if he shows back up at this point."

This morning I took Gabe out for his early morning pit stop.  He climbed the steps to the front porch and sniffed at the round door of the igloo.  I thought, "Aw, Gabe misses him too."  It was dark, but I took the time to stick my finger through the round door of Blue's house... and felt fur!  I turned the flashlight in that direction and there was Blue's face looking out at me.  I sent Gabe in and asked Blue if he wanted to come in.  He was very slow, but he did crawl out of bed and in the door, and even ate some cat food before he laid in his inside bed at the bottom of the cat tree.  At this point, he wasn't touching the floor with his back foot at all.  When Cliff got up and saw him walking in the kitchen to get a drink and said, "Looking at the angle of his leg, I think it's broken."

So I called our regular vet in Lexington; wouldn't you know Thursday is his day off.  The lady suggested we go to Odessa, where they have three vets.  We have to wait until 4:30 to take him, but he does have an appointment.

Boy, I hope we can afford this; he's now used up three of his nine lives. 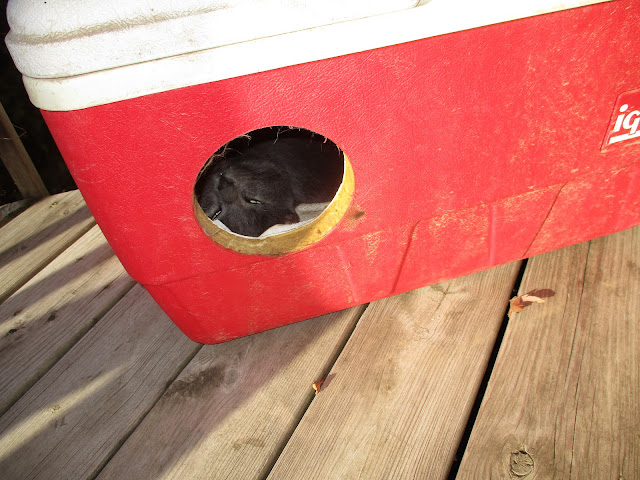 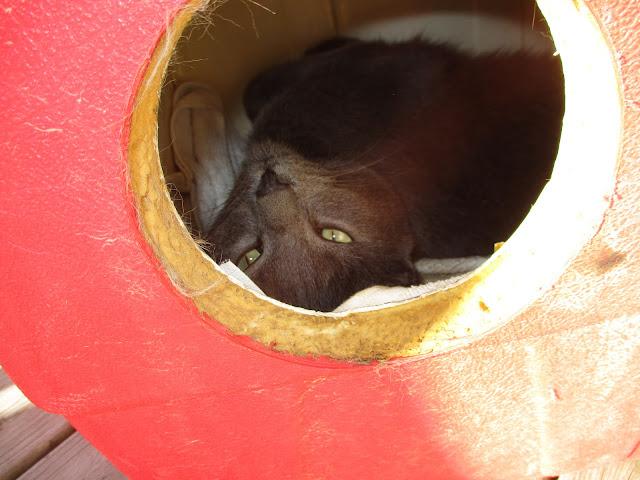 Blue's waiting in his Igloo.  All he wants right now is just to be left alone.