Don't you love it when things work out?

Cliff sold the fairly new John Deere he'd bought around Christmas and immediately began searching the Internet for another tractor.  The John Deere disappointed him in several ways, but he made a killing on it when he sold it, so it's all good.  I hated to see the air-conditioned cab go, because of Cliff's asthma, but it just wasn't big enough for a large man.

Little did I know the tractor he needed was right under our noses.  There's a retired farmer living right down the road from us; we once bought a 550 Oliver from him.  That tractor had a problem that Cliff thought he'd be able to fix, but it turned out to be more than he could handle, so he sold it.  I had been very excited about that 550 because it had a history, a story.  So I was very disappointed when it didn't work out.  One evening several days ago I went to the shop looking for my husband.  The grandson was out there, so I asked where Cliff was.  "Oh, he went to talk to Earl about buying his tractor."

What???  That was the first I'd heard of this.  When Cliff finally got back home, I asked what kind of tractor he was interested in at Earl's house, and he answered, "It's a White tractor with a cab."  Remember, Cliff's favorite brand of tractor these days is Oliver; Oliver was taken over by White around 1975, and they produced the White Field Boss tractor for, I believe, four years.  Cliff always thought Whites were ugly, but apparently he has been doing some research and found out they're a very popular classic tractor, partly because of the powerful Perkins engine.  People who own them are crazy about them.

In talking with Earl, Cliff found out he hadn't been able to get on a tractor for four years, so the tractor was of no use to him.  He also had an Oliver 1650; he'd taken the gas tank off long ago to fix some hoses (or something... I'm no mechanic), so it was totally immobile.  It would have been difficult to get it on a trailer, so Cliff decided to try and get it home with a car hauler.

By the time their conversation was over that day, Earl said he'd talk to some people and see how much he should get for the tractors.  By the way, that White tractor cab is air-conditioned!  Earl bought a new pump for it not long before he parked it.

Talk about something being too good to be true, this was it.

Cliff called yesterday, and Earl had settled on a price for both, sold together.  Cliff found it reasonable, so he and the grandson went yesterday evening and brought the White home.  It runs like a dream.  It needs some TLC as far as cosmetics go, but it's a great tractor. 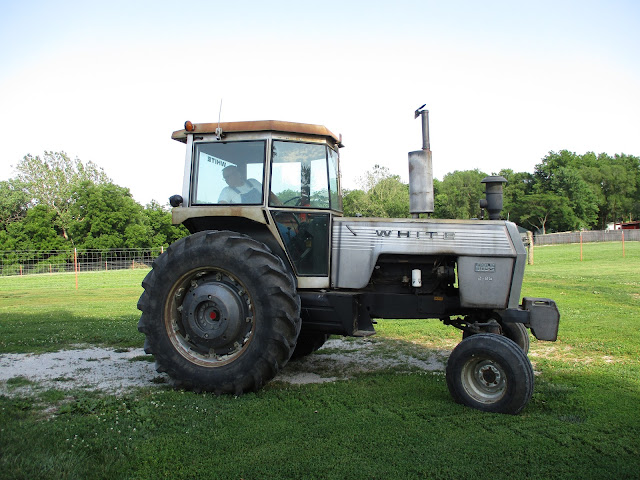 Today I went with Cliff and Arick to take some pictures of them bringing the Oliver home; with the gas tank off, it's just a big hunk of heavy metal.  At least they didn't have far to take it.  The grandson was a little nervous about the method of transport Cliff chose, but he did his part. 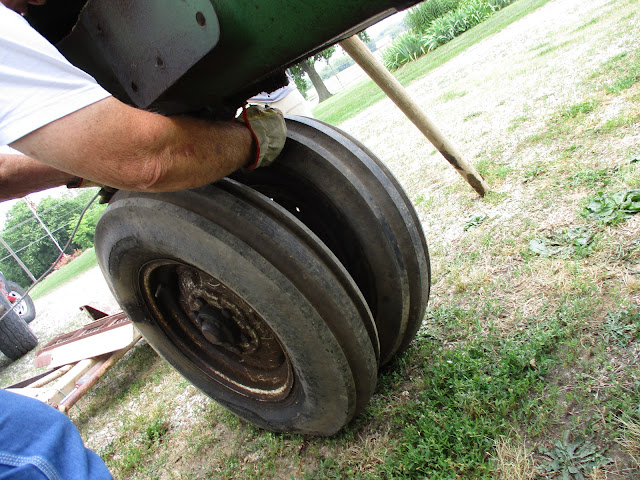 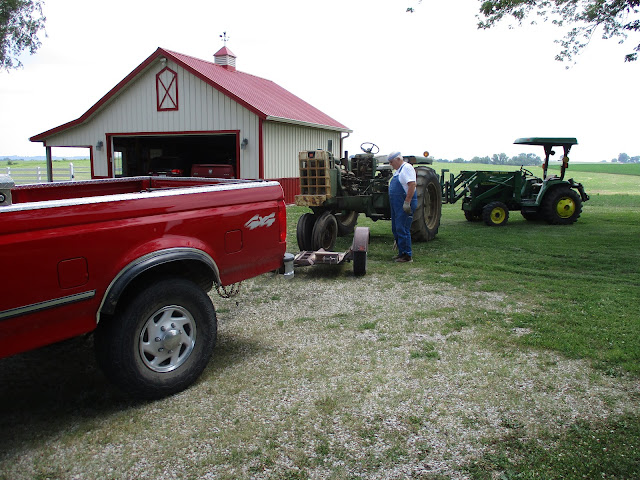 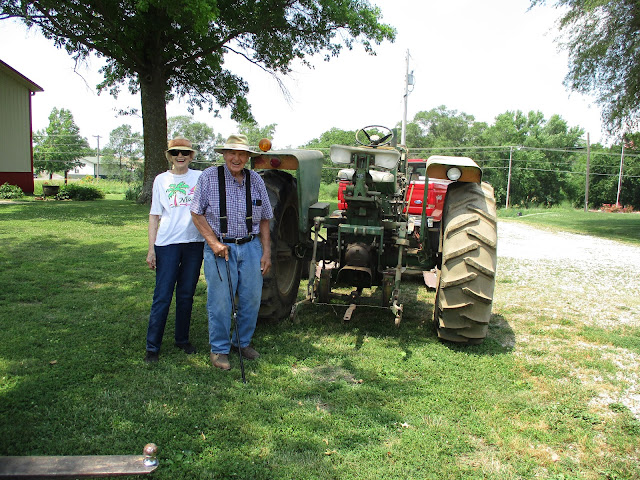 And here they are, the former owners,saying goodbye to the last tractor to leave their farm.  They are wonderful folks.
We'll cherish these tractors.
Posted by Donna. W at 4:05 PM