A report on my pitiful garden and some book reviews. Take it or leave it.

Yesterday we received over three inches of rain, for which I am thankful.  We've had some well-timed rainfall this year; the rains come just as I'm about to give up and water my now weedy garden.  I've had disappointments out there, but there have been small victories.  Many of my first plantings didn't come up, for no reason I know of.  Just when the tomatoes started to ripen, blight spread on the three plants, but we've certainly had plenty of tomatoes for the past couple of weeks, as well as green beans, some rather puny sweet peppers, and cucumbers.  Today I brought in enough sweet corn for a meal, so there's that. 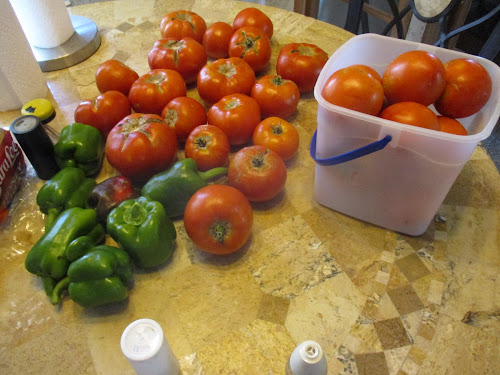 The whole table was practically covered in tomatoes yesterday, so I froze three quarts of tomatoes to use in my next three batches of spaghetti sauce.  The five okra plants are beginning to produce, and I have second plantings of green beans coming along.  I sowed some turnip seeds in a bare spot of the garden, but that three inches of torential rainfall we got may have washed them all away.  Now there is a huge chance of rain for the next three days.  The Japanese beetles seem to eat every growing thing in sight.  Sevin Dust kills them for a day or two, then a new army of them shows up for a feast.
If you didn't read my previous blog entry, the book I pictured there is absolutely great.  It's G-rated, too!  It may be difficult to find, since it doesn't seem to be well-known.  I check out e-books from two libraries:  I normally use Mid-Continent Library because they have a larger selection; they did not have The  in any form.  So I found a hard copy of "The Accidental Salvation of Gracie Lee" at one of the several libraries that are part of the group "Trails Regional".  I very seldom buy books, so had our library not had that one lonely copy, I would not have had the privilege of reading this book.  I wonder if it's out of print, since even Abebooks.com didn't have a reasonably-priced used copy of it.
I finished the psychological thriller "The Silent Patient"; it didn't scare me even a little bit, and was somewhat predictable... with a surprising twist at the end; don't waste your time on it.  But the book I'm reading now is a treasure; this is my second day reading it, and I'm over halfway through.  It's one I won't forget for years, if ever.  Believe me when I tell you that you need to read "American Dirt".  Cliff finished "Educated" and seemed to share my enthusiasm for the book.  He always makes me find his next book on the iPad because it's just more "computing" than he wants to mess with.  Most of the books I check out for myself have to be on hold for awhile before I read them, so I always need to find him something that can be checked out instantly, I looked at the 2017 New York Times Best Seller List and found one that sounds good, "The Life We Bury".  I also put "American Dirt" on hold for him.  While waiting for my next hold, I may read the one I checked out for him as well.  It sounds interesting, and unlike anything else I've read.
That's all I have... gardening and book reports.  Take it or leave it.
Yours truly,
Donna
Posted by Donna. W at 3:14 PM

You're the second person who has raved about "American Dirt." I may suggest it for my book club. I've read "The Life we bury" and I think it was OK. I don't remember being that impressed by it, but I don't remember why. :) I didn't grow tomatoes this year, so I'm envious of yours.

Gardening and book reports.... both are wonderful to me, Donna! Oh, I can smell those gorgeous tomatoes right through my computer screen. Love, Andrea xoxo

I’m glad you got some good tomatoes 🍅 and other vegetables as well! Home grown is the best! How do I find these online libraries? I think I would enjoy reading off my phone.

I just had my first ripe tomato of the season this week and it was so very good. I envy your tableful. They are so much better fresh from the garden. Hope your turnips make it through the rain. We've been dry and appreciate any rain that comes our way here. I continue to read about 1 book a day here. They've been my salvation here everysice the virus began. Take care, be safe and enjoy that garden and the books.

Your tomatoes look wonderful as does your peppers. I have one pepper on a plant and I planted 15 pepper plants. Ugh! My tomatoes are not doing so well, they are losing their leaves and I have very few tomatoes on them. My onions are about the size of a golf ball. Ugh! Why do I do a garden? Like you, its fun to do and try and one of these years I just may have a bumper crop in my garden LOL.
I love to read, but I read a lot of "fluff" books. No murder mysteries or scary stuff. No smutty books. Just fun fluffy books Wendy

looks like you got a nice haul from your garden. enjoy. liked the book reviews. will have to check out those selections to see what i think. take care. stay safe.