Appointments: the bane of my existence

My husband and I normally live a tranquil and perhaps boring existence here at Woodhaven Acres.  We have meals at the same time each day and watch the same TV shows each evening.  Twice a day at about the same times, I feed the dog and cats.  However, until lately, I didn't realize how much I like the sameness of our ordinary lives.  We've both had fairly recent trips to emergency rooms, but for the past few days, I'm been uneasy and a little angry, and I really didn't understand why; this morning, though, I had a revelation:  It's all these appointments that are driving me crazy.

Monday I had an appointment to get a haircut.  I'd only been to this particular place once, for my most recent haircut.  I had mentioned to my sister-in-law that people were charging $25 for haircuts out here.  With my naturally curly hair, almost anyone can cut my hair in 15 minutes, and they're done; why wouldn't a senior citizen get a reasonably priced haircut?  Rena suggested her beautician, Michelle; she has a shop in Blue Springs with two other ladies.  They all charge $15 for a haircut, but Rena highly recommended Michelle.  I went to her for the first time and was very happy with her services.  However... did I write down the name of the place?  No.  Did I remember which person to ask for if I called for an appointment?  Nope.

So when the time came that I was looking like a brunette Little Orphan Annie (or Raggedy Ann), I called Rena for the number.  Did I ask where the place was?  No.  See how crazy I am?  I called, though, and made an appointment.  Since I didn't recall the lady's name who gave me my last haircut, I just made an appointment with whoever answered the phone; I'm really not very picky anyhow.  I was scheduled for last Monday at 2 PM.  Since it's in Blue Springs, we left around 10 AM figuring to get groceries at Aldi and pick up other things at Walmart.  I had an Amazon return, so we stopped by the UPS store with that.  Then we went to visit Cliff's sister until time for my haircut.  I asked Rena to remind us again how to get there (we won't forget it now).  She was unhappy that I chose another hairdresser at that place, since she had tried all three and only liked the way Michelle did her hair.  I reminded her I'm not picky.

We got to the beauty shop at exactly at 2 PM.  I walked in and saw only one woman working on a customer.  I told her I had a 2 o'clock appointment with someone (remember, I have a problem with names).  She said, "OK, you must be here for _____; she's in back on the phone.  Insert a name there, because I don't remember her name either.  Ha!

The woman would come to a door in back with her cell phone at her ear, talking.  She motioned for the other beautician to start taking the customer who had come in for a 2:30 appointment, never acknowledging my presence at all, and disappeared into the back room again, occasionally peeking out but never saying anything to me.  I waited twenty minutes, and decided enough is enough.  After all, Cliff was waiting in the car!  I asked the woman who was working on the customer if she could get me an appointment with Michelle for a later time, so now I have a new appointment for tomorrow.  Really?  Two trips to Blue Springs in a week for a haircut?  Oh, and Cliff had an appointment yesterday with his new cardiologist... in Blue Springs.   And next Monday he has an appointment with the urologist in Lee's Summit, but two hours before that, I have an appointment with my gastro doctor in Blue Springs.  And since I've been in the process of finding a new blood pressure med that works for me, I have to make an appointment in Oak Grove for next week sometime so the nurse/practitioner can see if we have the right pill yet; I've been taking my blood pressure twice daily for two months... last month the dose she had given me wasn't strong enough, so she doubled it.  I think we have it right this time, because for the last several days my blood pressure has been running around 125 over 58 or so.

Today a guy is coming to clean the carpet.  Will I ever get back to my regular schedule?  Somebody just shoot me!

At least now I know why I've been so "off".  It's all these appointments.  I'm thankful for the doctors who are keeping us alive, but I'll be glad when things settle down, for sure. 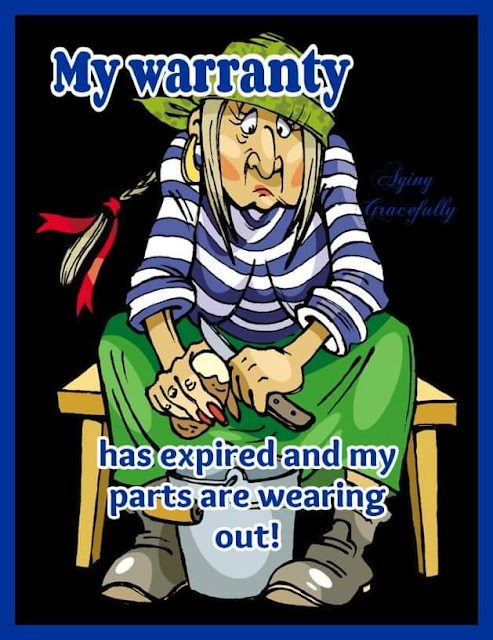