We're having a cold snap around here, for which I'm grateful.  We had to turn on the air conditioner one day already, and I hate to see that expense on our budget again; we're getting almost a week of reprieve for the next ten days.  We still haven't gotten enough rain, but I'm thankful for the one inch we got last week.  I may have to hunt up the soaker hose for the garden.

I'm still trying my best to concentrate on eating in a way that will help me.  The sucralfate I'm taking has been approved by the gastro doctor and will now be coming by mail every three months.  Since I haven't had my appointment there, I'm not sure if this is temporary or permanent; either way, I'm glad to have it coming; it's also cheaper when I get it from Optum RX.  I really wish I would stop losing weight now (never thought I'd be saying that).  I like the fact I'm down to 144 pounds for the first time in years, but enough is enough.  I'm five feet seven inches tall; the charts say I should weigh somewhere from 121 to 153, but I'm big-boned.  I have even had a couple of strangers mention that I'm "skinny"!  I think it will level out once I reach a stage where I know I'm eating the right thing; remember, I'm used to having plenty of ice cream, fried morel mushrooms, fried potatoes... also butter used liberally at every meal and snack.  I'm wondering if I should buy an air fryer, because I love fried foods so much; maybe that would be a happy medium for me.  And yet, at my age, I hate to buy another gadget for my family to get rid of when I'm gone.

I haven't mentioned Blue, the indoor/outdoor cat, lately.  I was going to make him live outside when he began shedding, and he does for the most part.  However, if he wants in, goes straight to his cat tree, and then goes to his bed next to that for a nap, I let him stay until his nap is over.  I have the kind of tick-and-flea stuff you apply between the animal's shoulder blades, so there's no worry about fleas in the house.  He's always outside during the night.  We are putting stuff in his ears for something... probably mites.  Cliff is amazed that the cat doesn't claw me as he puts the drops in his ears while I hold him;  Blue hates the process and squirms a bit, but never threatens to hurt anyone.

I found someone local who wanted the Little People stuff; the preacher's wife!  I refused to let her pay for them because she does so much for people around the community, even when she doesn't feel up to it.  She baby-sits a little girl who is enjoying the toys already, and her first grandchild will enter the world in a few months.  She has four grown children, so I'm sure she'll have more grandchildren in the future.  Those toys will make a lot of children happy for quite some time, I'm sure.

Our second-oldest grandchild, Brett, brought his two kids to visit Saturday.  We hadn't seen them for a long, long time, and we so enjoyed their visit.

I think that's all I have for now. 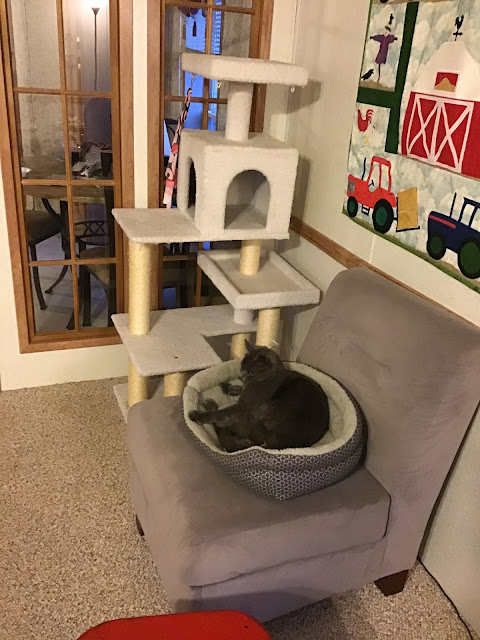