Finally, we had a day without rain (unless you count a few sprinkles)

Two or more weeks of daily rain brought back an old saying from my childhood in Iowa and north Missouri:  "Do you think the rain will hurt the rhubarb?"

As a child, I never knew what the saying meant, but I heard it often.  Remember, in the late forties and early fifties, most people still gardened.  All my farmer relatives had some rhubarb somewhere in or near the garden.  As an adult, I know that it's very hard to give rhubarb too much water; it thrives on rain.  So the answer to the question "will the rain hurt the rhubarb" is "of course not, anybody knows that!"  As a child, I didn't know why people asked the question, but I noticed they always smiled or chuckled when they said it; so I assumed there must be a joke in there somewhere.  I never cared for rhubarb, although I would eat a bit of the strawberry-rhubarb pies Grandma made.  My husband loves rhubarb, but he hasn't had any for years.

My weekend went well.  We "cut the cord" with CenturyLink (the company that we've been getting our Internet from since 1998) as well as Directv.  Our Internet speed gives us about four times the speed Centurylink gave us.  We are two miles from the source of our internet, which is at the top of the Wellington water tower.  I'm a little doubtful about how long it will work, because there are a lot of trees between here and that source, and trees do keep growing.  If it will last two years, I won't feel too bad about paying to have it installed here.  If not, I would hope something else comes along; my next-door grandson seems to think there will be another option at some point.

Yesterday was pretty warm, and the sun made several appearances after noon.  I did some tilling in the garden when I got home from church, and planted a few more seeds.  This whole Missouri river bluff we live on is made of windblown sandy soil that drains very quickly, so you can get five inches of rain on Thursday and three days later.  Even if I till it while it's a little too wet, it doesn't clump up and harden into rock-like lumps, the way clay soil does.  Many's the time I've put on my boots and just pushed seeds into the mud, when the rain refused to stop for days at a time.

The fenced area at the far end of the garden contains my three tomato plants and two pepper plants.  Raccoons have been know to visit my tomato plants when there are many green tomatoes setting on; they pull them off the plant, take a bite or two, then pull more off until what would be the first tomatoes to ripen are totally gone. 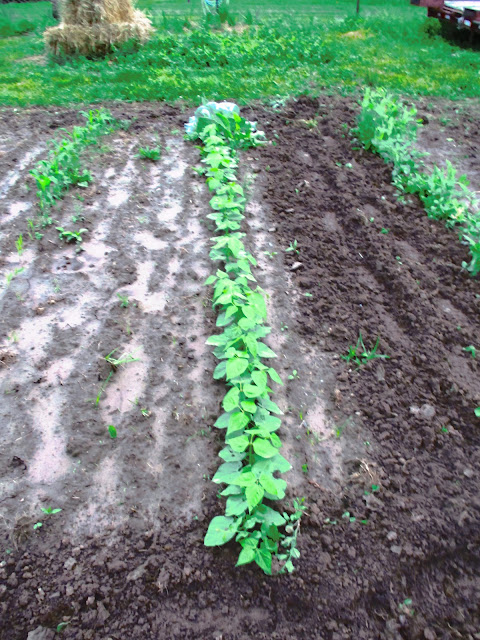 My row of green beans.  I also have a more recent planting that just popped out of the ground. 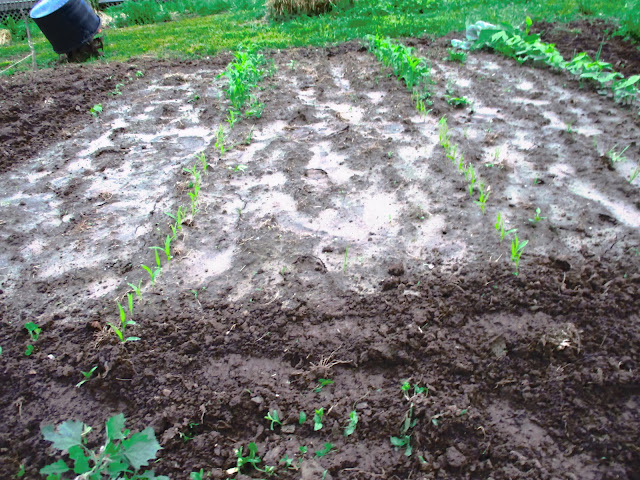 Here you have my two rows of sweet corn.  The nearer part of the two rows just popped up two days ago.  I need to thin the plants a little.
It's just a small garden.  I have no intention of canning anything.  At this point in my life, I just try to plant several small plantings so I have something throughout summer for the table, fresh.
There are some other random plants that don't show up in the picture:  One zucchini plant, which will likely be ruined by squash bugs before I ever get a single zucchini;  a cucumber vine over by the cage where it can climb up the fence, etc.  Oh, and two heads of cabbage at one end of the green bean row.
Gardening isn't the thrill it used to be for me, but it still puts hope and faith in my heart, watching things grow.  Below is a poem I wrote, back in the days of my huge gardens.
HOPE,FAITH,AND LOVE
Donna Wood
It's hope that orders garden seed,in winter's snow and wind.
Although the world is frozen, hope can see it born again!
It's faith that plants the tiny seeds, though spring has not arrived.
The seeds look dry and dormant, but Faith whispers, "They're alive!"
It's love that tends the growing plants and prays for rain and sun:
Love hoes and weeds and labors, till the garden season's done.
When I work in my garden, it reminds me, row by row,
That hope and faith and love together make the Christian grow.
Posted by Donna. W at 6:32 AM