From the hammock swing

I don't like to blog when Cliff is in the house with me.  If he says anything, my train of thought is interrupted.  I like being alone when I do a blog entry so I can get into sort of a zone where anything can happen:  Then I often end up telling a totally different story than what I started out with, and often better; not saying that's going to happen today, though, because it's a random thing.  But I went to the hammock carrying my computer, where the only living creatures around me are Gabe the dog and Blue, the cat... who is definitely NOT an inside cat!  I let him in the house briefly for his evening meal of canned food, and every once in awhile I let him in so he and Gabe can play; but he will go to the door wanting outside if I keep him in too long.  He loves being a barn cat!

He still makes us laugh:  I wish I could get a video of him chasing my three chickens.  All he does is run toward them, but they half-run, half-fly away cackling, while Blue, who thinks he's a cheetah, stalks them.  He jumps out from hiding and bounds toward them fast as he can, then walks confidently back to the nearest tree and sharpens his claws on the bark as though he's a mighty conqueror   He wouldn't know what to do with a chicken if he caught it, the poor deluded thing, and they're bigger than he is.  But he considers himself a mighty hunter.

Cliff decided to mow in spite of the wet pasture so I'm back inside; I made Pioneer Woman's chicken spaghetti for dinner.  It's one of our favorite dishes that had fallen to the back of my memory so far that I forgot it existed.  It's probably been two years at least since I made it, but I don't intend to wait that long again!

We were gifted with a two-pound bag of carrots yesterday right after I'd bought two pounds of them.  We eat cooked carrots in various ways, so I always have some, but I didn't think I could use four pounds before they started getting moldy or limp (or both), so I spent some time this morning making glazed carrots and freezing them in four freezer bags.  That'll be handy to have as a side when I need one more item on the menu. 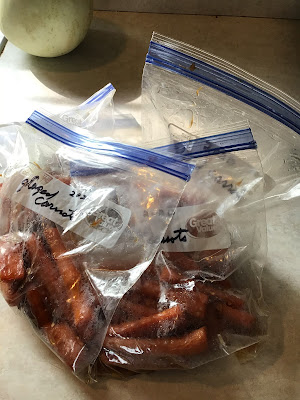 I've been forcing myself to use more of the food we have on hand rather than go to the store and buy things I wouldn't have to.  I have a tendency to wake up thinking of cooking something I'm craving only to find there is one ingredient I'm out of; then I tell my sorry story to Cliff and he offers to run to Lexington or Buckner and get it.  That's eight miles one way, and it's ridiculous, when I could switch recipes and make whatever I'm craving on a later date after we've been to the store.  I'm done with that, which is why we had chicken spaghetti today:  I got the chicken and frozen broth out of the freezer yesterday, then realized we were out of spaghetti.  Rather than let Cliff go make a purchase, I fixed something else.  We planned to go to Buckner yesterday afternoon, so I bought the spaghetti for today at that time.

If anybody gives me food in good condition, I make an effort to see that it is used.  I may freeze it if possible, or try some new-but-rather-strange recipe, but my mom instilled in me the notion that it's a sin to waste food; if she's looking down, she's probably thinking, "So what happened to those other virtues I tried to instill in you?  There were some great things I tried to get into you, and you chose this?  I wanted you to be a preacher's wife."

I'm sorry, Mother.  You did try very hard, but I always felt sorry for preacher's wives because people expect them to be perfect and have perfect kids and be a perfect homemaker.  Perfect never did fit me very well.

Keep positive, my Internet friends and family.  Nothing lasts forever.  Time and change enters into every facet of our lives, and this pandemic thing will, at some point, be only a memory, just something old folks will tell stories about to their grandchildren in 30 years.

I was adjusting (not well, but OK) to the pandemic, but I'm not OK with the air quality/smoke issues being added in. Quite honestly, I've been losing it a bit and need to get on with doing what I can do. (which is very little that I enjoy at the moment) What are some of the strangest dishes you've made? I was intrigued when you brought that up. If you were to make a list of your favorite meals, what would be on it? I'm (too) intrigued by food these days, trapped in my house as I am.

I loved your last paragraph! I hold on to that hope every day! This week we are eating all the frozen left over meals that we've been accumulation over the past few weeks! It's nice to get the freezer emptied out!

My grandmother's baby sister died in the 1918 pandemic. That one lasted a couple of years if I recall the book I read on it.

Nice you have an outdoor hammock to sit in and enjoy and nice you make such good use of the food you have. I'm going to get a freezer so I can do more of the same. I have many leftovers tht get thrown out because I have no room in the fridge freezer to keep them. Enjoy your pleasant days and I agree...we'll be telling the stories for years to come. Nothing lasts forever.

I love your words of wisdom about the pandemic, Donna. So very true. My mom was a waste not, want not, kind of person as well. I think it's because she was born in 1918 and survived during the depression and also WWII. Those things had a tendency to shape people, I have a hunch. ~Andrea xoxo