Well, friends and neighbors, I'm back

Cliff and I finally took our little road trip.  We traveled over 500 miles round trip to Iowa to see some tractor museums, one of which we had seen twice before... Farmall-land... but Cliff loves the display of shiny red tractors looking their best; he wanted to see them one more time.  I had a terrible time talking myself into going, simply because (as I've said before) I just do not care if I leave the house.  I don't think it's the fear of Covid, I've just gotten used to staying home.  I couldn't even make myself prepare properly for the trip like I usually do, and kept telling Cliff, "I know I'm forgetting something, but I have to make myself travel so I don't turn to a pillar of salt staying in my house.

Our first stop was in Clarion, Iowa, where the four-leaf clover emblem of the 4-H clubs was conceived.  It's a small town, about half the size of Lexington, Missouri, and sets in the middle of nowhere.  But the Heartland Museum is quite an attraction.  I was surprised at the number of people there, although it wasn't hard to keep six feet from people.  We wore our masks, but most people did not; this held true about anywhere we went in the state of Iowa.

Because of Covid, the museum is only open three days a week from 9 AM to 3 PM.  We arrived in town about 1:30, so had no choice but to go ahead and get a motel.  This usually happens to us when we go out of state:  We get there mid-afternoon when there's not enough time to do anything, then I wake up by 5 AM and we wait until 9 or 10 when things open.  The motel was practically across the road from the museum.  We had no problem with it, and chose it because of the rates:  $67.  The bed was OK, and the room was fairly clean, so at the price we agreed on it was OK... but I'd only give it 3 stars if I were rating it, although reviewers average rating was 4.5.  No motels are doing breakfast right not, but I had eggs, coffee, bread and other items plus our little electric skillet, so we had no problem having breakfast.

We had checked the museum on the Internet and read reviews, so we were excited to see it for ourselves, but there was a big bonus for Cliff.  Big Bud was there temporarily!  We saw Big Bud in 2009; I think Cliff was working four-day work-weeks at the time, and I talked him into going because he had dreamed  about seeing "Big Bud" for years.  And it turns out, Big Bud got even bigger since then, and all because of some new tires.  First of all, I'll show you the difference the tires made. 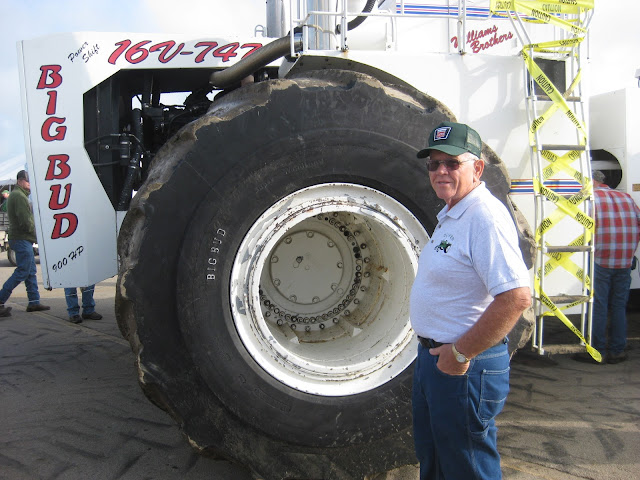 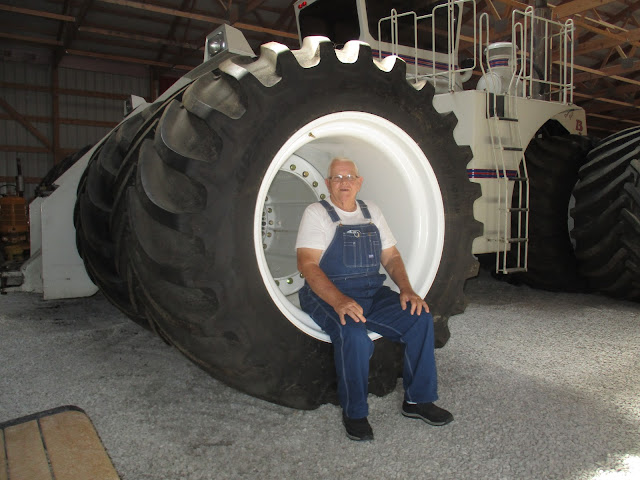 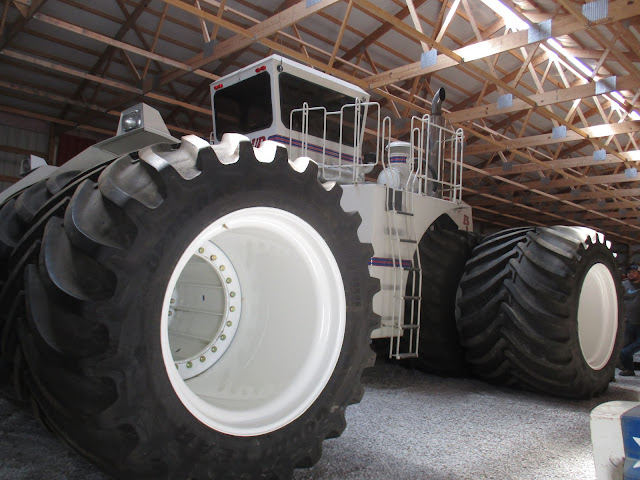 And here it is, in all its glory.  We were really lucky to catch it, since it leaves August 31.
We watched a film showing the old tires being removed and the new ones installed. Cliff was happy to find it on Youtube after we got home, because they didn't caption the film at the museum; so he couldn't understand the narration. Better late than never, he finally got to hear what was said!
We were both plagued with arthritis pain, but I had my chair-cane (cane-chair?) and told Cliff we'd better be getting one for him before long. He's doing well to drive so many miles, and it only gets worse when we're walking around museums for hours. I'll do at least one more entry about our trip, but this is enough for today.
Posted by Donna. W at 12:42 PM