Sometimes I amaze myself with my forgetfulness:  I accidentally ate two breakfasts this morning.  I awoke around four, thinking about those cheese grits in the refrigerator, so by five I was eating some delicious grits.  Then I did two days' worth of reading in my one-year Bible, because I forgot about it day before yesterday.  I do believe I'm going to make it through the Bible this year.  I always start out in January with good intentions, but I often drop out in three or four months.  Anyhow, by the time I read that and caught up on Words With Friends, which I hadn't done for about 24 hours and had quite a few rounds, it was time  I crawled into bed with Cliff at 7 AM; we talked awhile and when Cliff got up, I told him it seemed to me he isn't eating two meals a day now, but has been having a light supper of whatever he can find:  That's what we were doing before he went on the two-meals-a day thing.  So I said, "Can we please go back to our regular mealtimes?"

Regular times consist of a light breakfast, the biggest meal of the day at noon, and whatever, but not too much, of whatever you can find in the evening.  If we have something more substantial for breakfast like a breakfast burrito, we hold off until 2 PM for dinner/lunch.

My peach tree has lots of fruit getting ready; I've already done a few pints of sugared peaches to put on cereal, and a couple of loaded quart bags that hold five cups of unsweetened peaches for cobbler.  I'd love to go ahead and make the filling, with sugar and all, to freeze.  But I'm afraid if I added sugar, a quart  freezer bag wouldn't quite hold it all.  I canned one quart of corn yesterday and we had some for dinner.  That's the last of the corn.  But I digress.

I told Cliff we'd have Mini-spooners with peaches for breakfast, not even thinking about the fact I wasn't hungry.  It wasn't until two hours later I realized I'd had two very substantial breakfasts!  I get excited when the peach tree produces.  For some reason, we had no peach crop the past couple of years.  The local peach orchard had plenty, so I don't think my lack was due to the weather.

So I'd already told Cliff dinner is at noon and we'd be having meat-and-corn-bread squares, one of his favorites.  I knew I wouldn't be even a little hungry.  I just went ahead with it, and told Cliff I'd heat up a serving in the microwave when I get hungry (or tomorrow, because it's 4 PM right now and I'm not hungry yet).  I went ahead and had my dessert, though... a modest (one biscuit) piece of peach cobbler with a little cream. 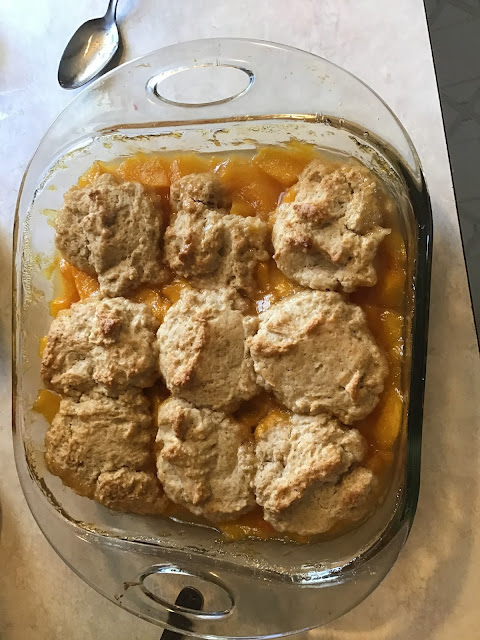 Meanwhile, peaches have taken over the kitchen.  I pick them while they're still solid, but in a day or two they ripen nicely and I freeze them.  Here's what I have right now: 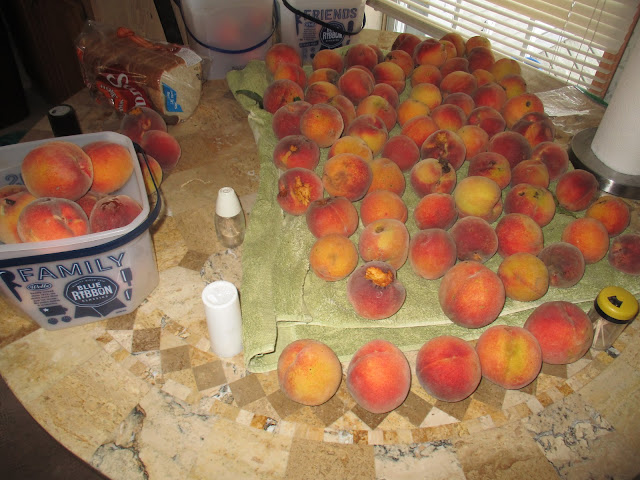 There are three ice-cream buckets full as well as those spread out on the table.  the five lined up closest to you in the picture are flawless peaches.  In a couple of days they'll be ready to eat for a snack.  You can see flawed fruit behind them, one had been pecked by a bird.  And there's the occasional worm.
Oh, here's a surprise growing in the garden... it's a surprise because I didn't plant it: 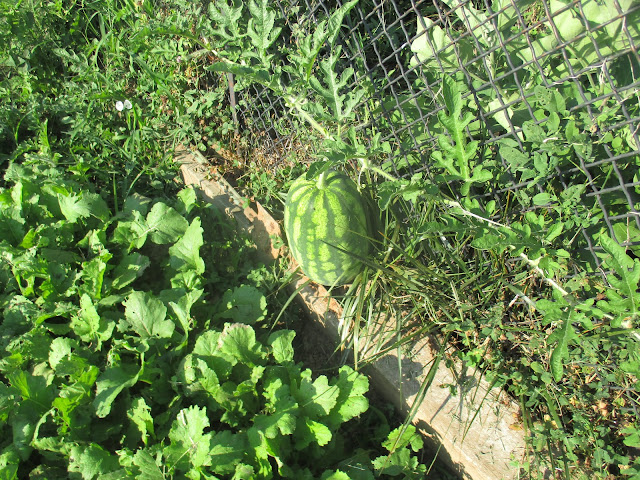 I often toss watermelon rind across the fence, so I'm guessing that's how the seed got in the garden.  I first noticed the watermelon when it was about two inches long.  When I showed it to Cliff, he said, "When it gets heavy, it'll fall off the vine."  Well, it's two feet long now, and it's still hanging on, although it is resting on that 4X4 on the ground.  Those leaves you see in the foreground are my turnip-tops, from the turnips I planted on the twenty-fifth of July, wet-or-dry... so I can harvest them the twenty-fifth of October, drunk or sober.  I tried sowing them by hand, so they are too close together.  It's sort of hard to do anything wrong with summer-planted turnips, though.  They aren't picky.  Speaking of things not being picky, Gabe has practically made himself sick cleaning all the good red parts on the rinds we throw out.  He does love watermelon.  His favorite garden vegetable, though, is sweet corn.  I crowded my corn when I planted it, so every stalk had one perfect, large ear of corn, and a couple of what my parents called "nubbins".  They are smaller ears with only about half the corn on them, scattered here and there.  When I got hold of these, I tossed them on the ground.  Gabe has probably eaten two quarts of corn this year, and it's showing a little.  I haven't weighed him lately, but his sides stick out a little more than usual.  Here's what a corn cob looks like when he's done with it: 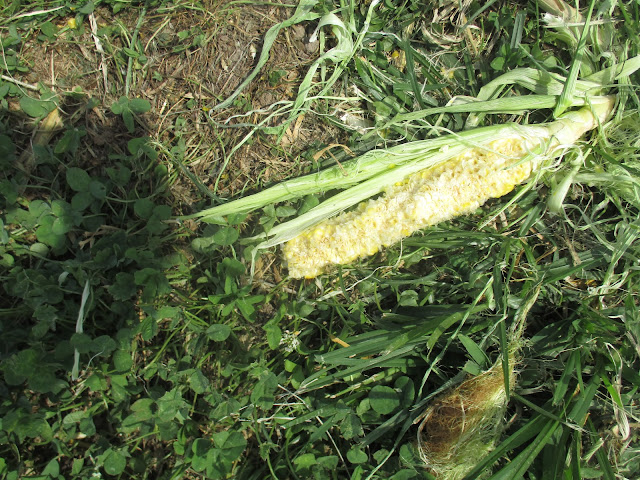 And that's all the news that's fit to tell.  My skeletons shall stay firmly in the closet.
Sincerely,
Donna