Just settling in for the long haul

I'm not checking on the COVID-19 data so much now.  Seems like it's the same old thing, no matter what day it is, and it finally became meaningless to me.  I check how many cases are in our Lafayette County after 2 PM each day and leave it at that (it's 28 cases this afternoon).  Maybe I've had a little attitude adjustment.  Today I feel more settled.  Maybe now I can  read a book, because I just haven't been able to get interested in any book since this mess started.  Cliff, on the other hand, is reading like crazy.  He usually brings the iPad to me when he's finished a book:  I return it and pick out another book for him.  A while back he did his own book-choosing, and happened to like what he got; but usually that doesn't happen.  He doesn't type, so he isn't good at typing words in a search engine to find the sort of book he prefers.  I'm getting pretty good at knowing what he'll like, though.  The library has lots of books they recommend, but most of them are fiction, and Cliff finds about 75% of the fiction he reads to be silly, although he'll read a Virgil Flowers book once in awhile, or even a Chet and Bernie (there's another one coming out in July).  Today I went to the library online, typed in the word "football", and found a book he will probably like.  I don't accept the library's rating of a book; I go to Amazon's website and see what their ratings are.  They rate this one at almost five stars.  The entire title is Fields of Battle:  Pearl Harbor, the Rose Bowl, and the Boys Who Went to War.    It's non-fiction, so that's a point in its favor.  He likes reading about the various wars our country has fought, and he likes football.  We shall see.  I've told him to never feel forced to read a book if it doesn't suit him.  Library books are free, so we're not under any obligation to read a boring book.

I've been making lots of cookies, simply because I enjoy it; I share them with the grandson, which he enjoys.  Unfortunately, I've made so many, I broke the beaters on my hand mixer.  I paid under $10 (on sale) for the mixer over four years ago, so it doesn't owe me anything.  It has a flaw frequently mentioned in many of the reviews: it has five speeds, but none of them can be called slow.  So I have to use a bigger bowl or those speedy beaters will sling bits of dough, batter, and butter all over the kitchen.  The beater itself is as powerful as any I've had, with a motor that never slows down, gives up, or gets hot.  So all I need is beaters, right?  Imagine my shock when I saw the beaters alone are $20!  This left me debating whether to just get the whole mixer with beaters for $25 (it isn't on sale now), or pay $20 for just the beaters.

Yes, I bought the whole mixer.

My sister called to check in this morning; she doesn't have Internet, so one of her grandsons made a DVD video of her kids and grandchildren leaving messages for her.  She enjoyed that.  Yesterday our oldest granddaughter and her mom were in the shop with Arick, so we went out and sat 10 feet away from them and visited awhile.  The grandson uses lots of wipes and spray to de-germ the shop after he's been in there working, in case Cliff goes out there to do something.

About once a week our daughter does a Skype visit with us and any of the rest of her family that wants to join in, so we get to see our newest granddaughter, who is growing like a weed already, and all the others.  I wonder what Brynn (the baby) will think when this is over and people other than her parents want to hold her?  Another couple of months and she'll probably be scared of us all.

The grandson has been working a lot, even doing some overtime.  He works at the company Cliff retired from, and so does our daughter's husband.  The company is listed as "essential", but someone told Arick the other day, "It isn't if we run out of work, but when.

On my walk today, I noticed gray and black feathers all over the ground covering a wide area.  Some feathered creature apparently lost its life, or else had a narrow escape.  I didn't see any blood around, so maybe it got lucky.  If so, it is surely naked and cold, because there are lots of feathers. 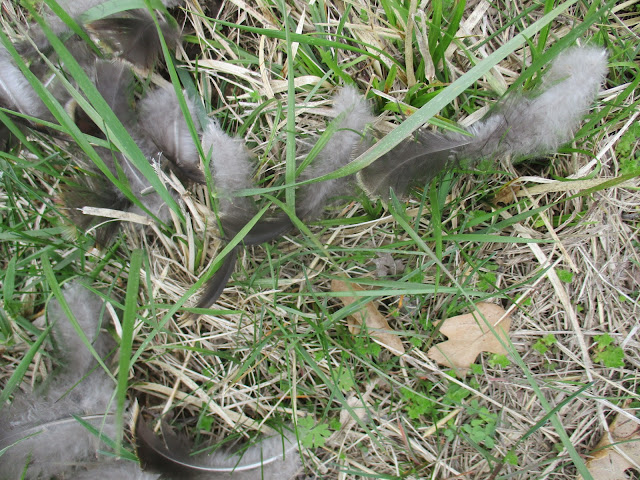 The woods are coming alive now.  Surely mushrooms will be found this week.

A new Virgil Flowers? How did I miss that? I've been really into mindless mysteries, although I do have some literary stuff to read. I'm letting myself do whatever I want (mostly) because it's the only treat I have right now. I have flour but no one to bake for! I wish I did because it would be fun to make Easter sugar cookies.

Yep, for the most part I only know what hubby tells me he hears on YouTube or if I happen to walk by the tv when he's watching the daily press conference or something. I know enough about the virus, in that it's supposed to peak within the next couple weeks and that we're all supposed to stay home. That's all I need to know, I guess. For the first time today I find myself actually missing a walk through the grocery store, which is something I hated to do before. The last time I was in a regular grocery store (not the health food store) was on February 29th. I've been in the health food store twice in early March (with gloves & mask on) but other than that, nothing. Indiana isn't allowing leisure rides either anymore now so.... we can't even go for a ride in the car, to get out a bit. Oh well... this too shall pass. I love those little flowers you posted but I don't know what kind they are. I love reading non-fiction too. Love, Andrea xoxo

They keep on moving forward a month at a time with their predictions of when this will be over, so I too have settled in for the long run. This is a new way of living, but I am still alive and want to keep it that way. I've read more since I've been able to get library books on my kindle. The options are endless. I read fiction and it takes my mind off what is going on. That is fine with me. I have things to do but don't do them because I want to read the next good book on my bookshelf. Take care and enjoy life in the slow lane !

I also love the little wild violets like those in the bottom picture. I used to gather bouquets of them when I was a little girl. Their bouquets were too delicate to last, so now I enjoy them in the yard. I have an area where I used to transplant them into.

Heard this morning that John Prine has died of the virus. I know from past blog posts that you quite liked him. His "Angel from Montgomery" song is one of my favorites. Sad loss for music. My friend came for a visit yesterday. We sat in chairs about 10 feet apart. I desperately wanted to give her a hug but that was out of the question.

Enjoyed reading your blog, Here in California the first couple of weeks was like like living a nightmare and you cant wake up. The shelves were empty. Now its six feet a part and only a few at a time in certain stores. My prayers go out to New York. They were hit hard. On Thursday. the death count was 960 I think reading a book is a great ideal. We need less news I pray you all stay well and this to shall pass
John

Enjoyed reading your blog, Here in California the first couple of weeks was like like living a nightmare and you cant wake up. The shelves were empty. Now its six feet a part and only a few at a time in certain stores. My prayers go out to New York. They were hit hard. On Thursday. the death count was 960 I think reading a book is a great ideal. We need less news I pray you all stay well and this to shall pass
John