Back to Memphis and the Civil Rights Museum

We  walked the short distance to the Civil Rights Museum from our parking place by the barbecue.  Cliff thought we'd be better spending our time elsewhere, since we knew all about what went on in the days of civil rights marches, integration, and so forth.  "We lived through it," he said.

Actually, I didn't, personally, because none of that was happening in Kansas City in the 60's, that I knew of.  Schools were already segregated there.  (When Dr. King was shot, though, all hell broke loose in Kansas City.)  It was on the news every single night.  I was horrified at the way people treated others just because of the color of their skin.  I saw lovely, every-hair-in-place ladies spitting on children being escorted into newly integrated schools.  I was living alone in my first apartment on eleventh street in Kansas City at the time.  I watched Walter Cronkite every single night.  I remember wishing I had the nerve to go south and march with those people, like many college students were doing.  However, when those students started being killed, I knew I wouldn't have gone, even if I'd had the resources.

First of all, I need to tell you that until we moved to Kansas City, I seldom saw anyone of color.  But my parents seemed anything but racist in my book.  They never said anything negative about "colored people" the term polite folks used at the time.  We were still in the small, north Missouri town of Eagleville when Rosa Parks refused to give up her seat on the bus.  About the only black people I saw in the 40's and '50's were in the movies;  they often played comical-but-lovable parts, acting scared of the dark and so forth, sort of like Buckwheat in the original "Little Rascals".  If they played serious parts, they were usually cast as servants.  Mother and I would go to a movie once in awhile, and I guess there must have been a black baby or toddler in one of them, because the next Christmas... or perhaps my birthday... I wanted a black baby doll.  I thought black babies were cuter than white ones.  I do remember using the "N word" when I asked for that doll, though, so I suppose my parents used the word too.  It was rural Iowa.  Everybody was white there and I certainly didn't realize it was a negative word.  My mom got me the doll, though.

Anyhow, Cliff thought we had nothing new to learn about civil rights.  In a way, he was right.  We've watched a lot of PBS documentaries about those times:  the stories would break your heart.  But Cliff said we made this whole trip because I wanted to, so we went. 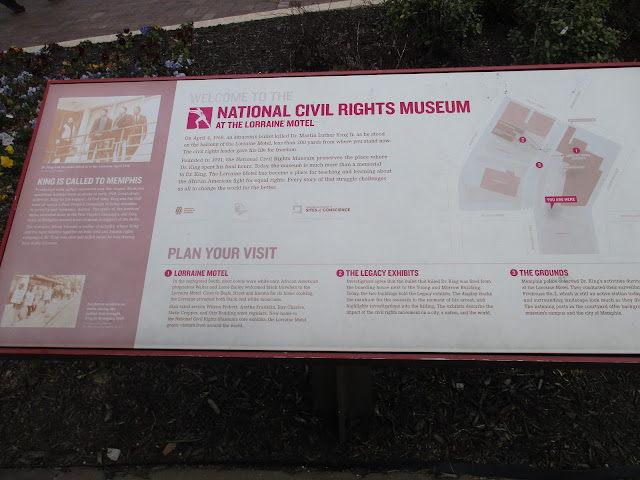 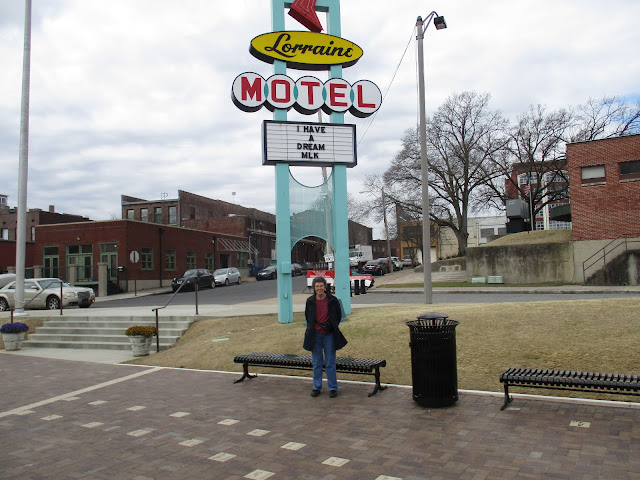 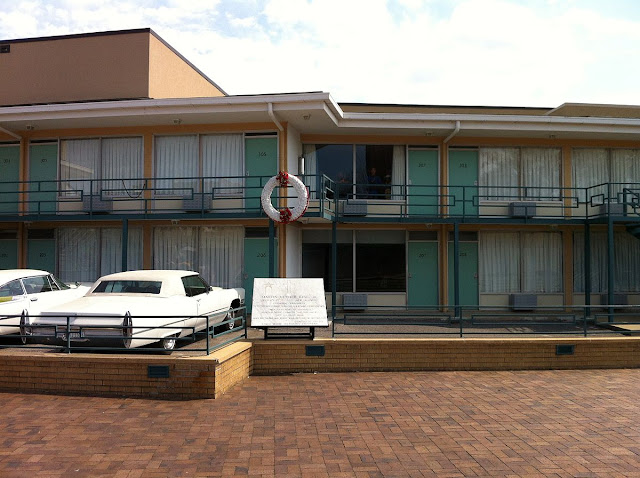 The white wreath shows where Dr. King was shot.  I didn't take this picture, I found it on the Internet.  Only once in the twelve years I've been blogging did someone email me, telling me to remove a picture because it was theirs.  I did so. 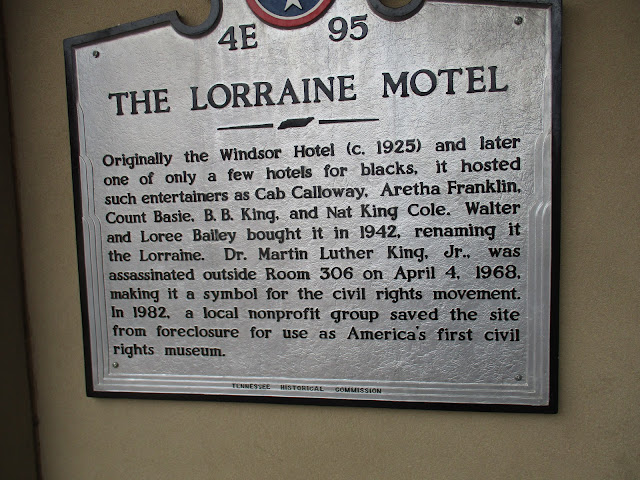 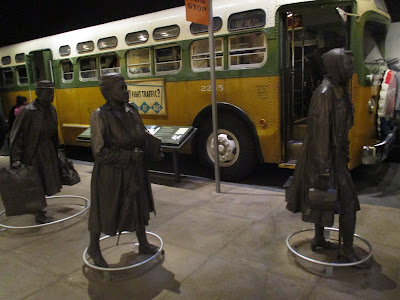 Everywhere we went in Memphis, the lighting hindered me from getting decent pictures.  At least you can make out what this is.  Part of the picture-taking problem is that you can't use flash.

Here's a little something I'll share:  We stopped to watch a short video about civil rights in a mini-theater inside the museum.  One thing mentioned therein was an experiment done in the 40's where you put two baby dolls in front of black children, a black doll and a white doll.  Then you'd ask questions like, "Which one is the smart doll?" or "Which is the prettiest?"; most of the time, the black child would choose the white doll.  There's a ten-minute video on Youtube HERE showing how it went.  You don't have to watch over a minute of it to see how that went down.

That's sad, but here's a little thing that happened when it was over:  As we were leaving, a black dad with his little boy beside him stopped at a glass case on the way out that had a black doll and a while doll displayed, side by side.  The man asked his child which doll he liked best.  The kid chose the black doll.  The dad asked another similar question... the boy, about five years old, still chose the black doll.  So at least in that family, there has been some progress. 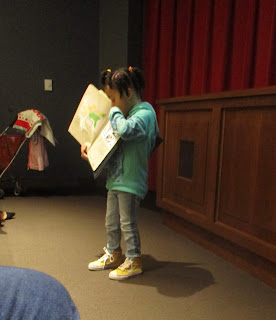 The little girl pictured above is that little boy's sister, I believe.  I'm not sure what that book is, but it was something about the video we were watching, I'm sure.  She decided to stand up in front of us all and show us the book, turning a page at a time.  Isn't she a cutie?

Cliff still says it was a waste of time for him, that he didn't learn anything new.  For me, it was a good reminder.  Besides, the world needs this museum for future generations who did NOT live through it.

It is a good reminder for all of us, but especially for those that never went through it.

I think we can almost always pick up something new or be reminded of something we've forgotten. We went to a history museum in Austin(the Bullock) and it was depressing and awful how the Native Americans and the blacks were treated by just about everyone. Have you seen Green Book? Or BlackkKlansman?

I recall walking to school with two black girls when I was in high school and one of my teachers called me out and told me I would ruin my reputation walking with those black girls. One of the girls was the daughter of a black minister and the other was a teacher's daughter. I was offended by that teacher's prejudice....even then.

My husband and I are Caucasian... our youngest daughter (21yo now) was adopted by us and is African-American. Where we live, in northwest Indiana, it's very liberal and race-accepting. But travel just a little bit southeast (90 miles or so) and racism is alive and well. *sigh* Unless people experience it firsthand, they really don't know how much racism still exists in this country. Very sad. I loved reading your account of the museum and so forth, Donna. Beautiful narrative and pictures. Love, Andrea xoxo

sounds like a good place to teach lessons of the past.

I didn't realize there was so much to see in Memphis. I grew up in a rural area too with very few black people or people of any other race besides white. To me as a child, seeing a person of a different race was a novelty. My mother never acted prejudiced but often told me as I got older that I shouldn't date black men and that one time, one of my cousins was caught kissing a black boy on the front steps and how shocked and appalled the family was.
When I was in the Air Force, I started dating a very nice black man, but broke it off because I was so worried about what my mother would say.
She is a very open racist now, some of the things she says just shocks me. I don't know if it is dementia or she really feels that way.