What a nice day it's been, after all the snow, swampiness, and everything else we've had.  I need to get a "springier" picture up at the top, because I've seen about all the cold and snow I want to for this year.

We rode on "Big Ollie", Cliff's pride and joy, to be in the St. Patrick's Day parade in Lexington.  We neither one have anything green to wear, but the big green tractor was enough green for anybody.  I've told Cliff he has to celebrate St. Patrick's Day now, because his DNA test revealed he has a good portion of Irish blood in his veins.  We don't have a trailer big enough to haul Ollie, so we usually only take it to places close enough to home that we can ride the tractor to our destination. 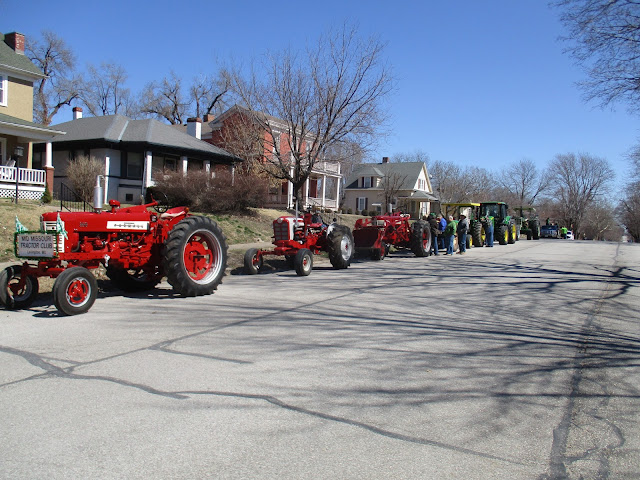 It was a good-sized group to see in St. Patrick's Day parade.  We had only participated once, two or three years ago, and that was a damp, chilly day.  I still needed a coat today, especially on the highway going and coming, because we go so much faster on the highway.  Ollie is pretty speedy, as tractors go. 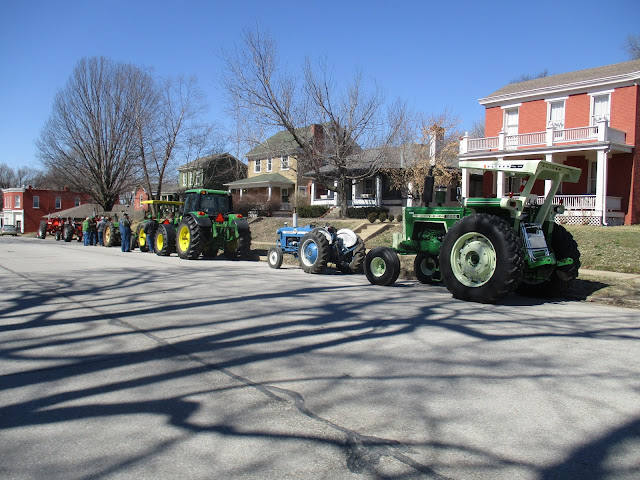 This one is taken from the other direction.  That closest one is ours.  One other guy showed up after I took this. 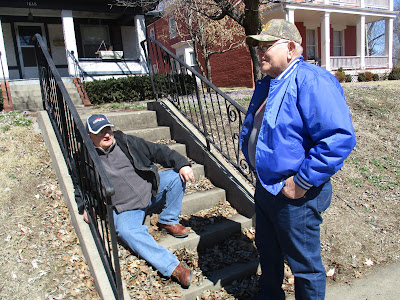 This club member was looking pretty lonely and weary, sitting on those steps.  We found out he had good reason to be tired and a little down.  His 70-year-old wife has congestive heart failure.  The doctors had done everything they could, but really thought she wouldn't make it; her kidneys were not working.  He spent 14 days and nights with her at the hospital, thinking she was dying.  Finally they gave her some lasix, a strong diuretic, and her kidneys began working again.  She's home now.  He said he told her she is not allowed to die until he does!  Cliff is always telling me the same thing, that he has to die first.  Listening to them talk, I realized they have a lot in common. 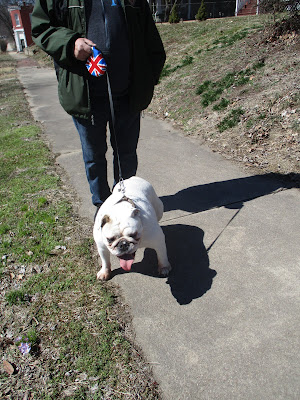 I met this little lady on the sidewalk. 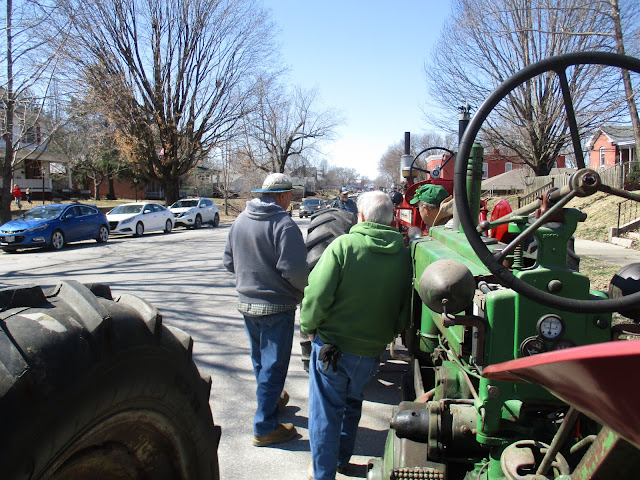 See the guy with the straw hat-brim on?  Yeah, it's just a brim.  I guess it keeps the sun out of his eyes, and that's all he's worried about. 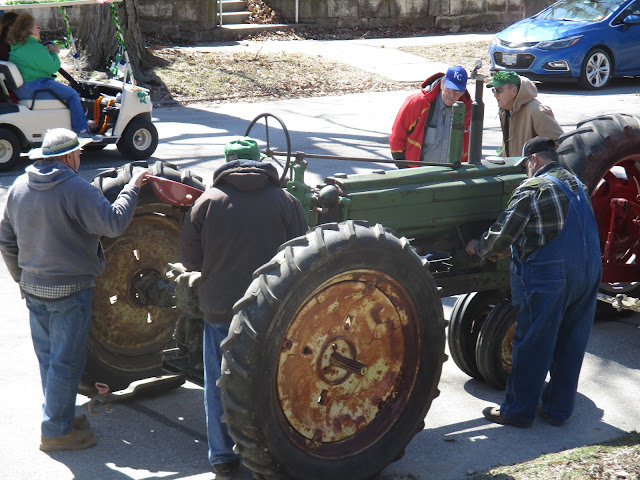 Isn't funny how they are all looking on?  That guy in the overalls is trying to do something (I think) to make the tractor run better.  I enjoyed these guys admiring the old John Deere B. 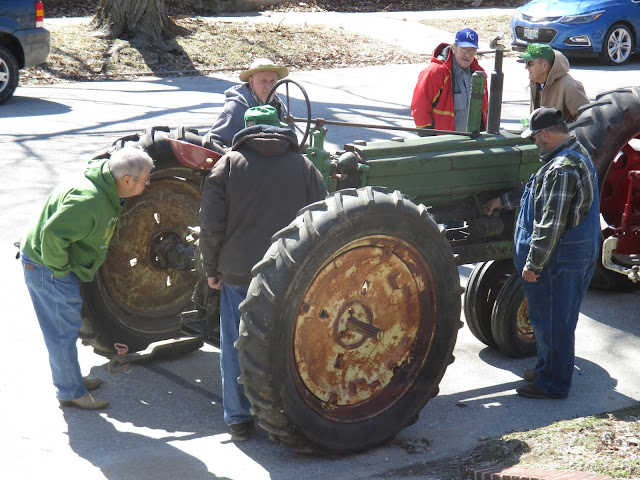 I swear, they were gathered around that old classic for at least 45 minutes. 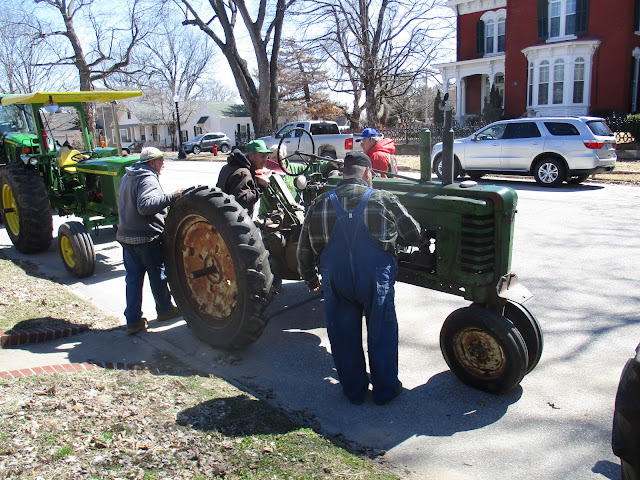 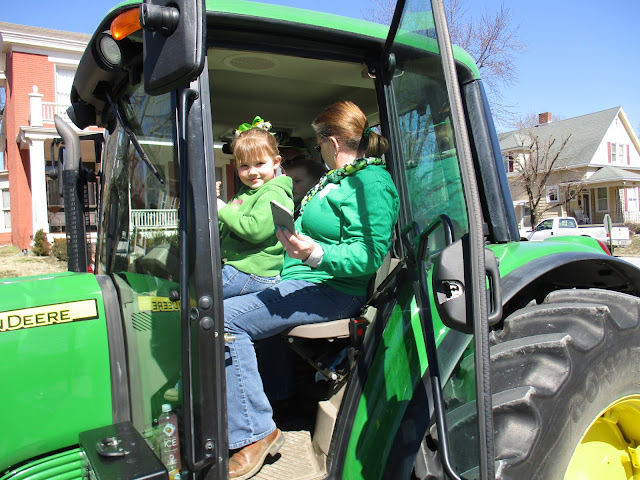 These folks brought their practically new tractor with a cab so their two grandchildren wouldn't fall off a tractor.  Isn't that little girl a beauty? 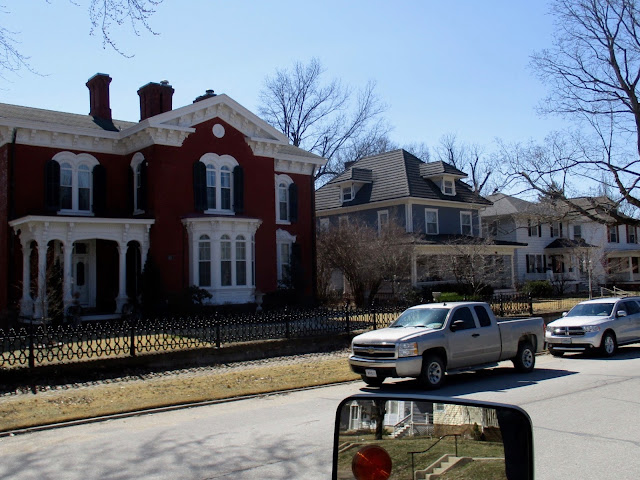 I love the old houses in Lexington.  This brick one was built, I believe, in the 1850's. 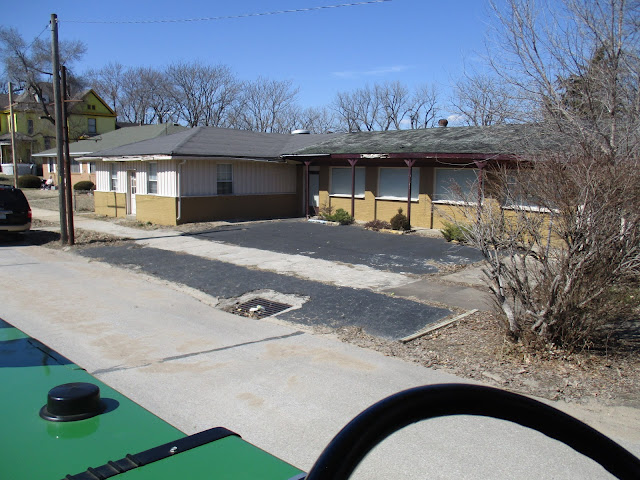 25 years or so ago, this was a Chinese place.  We loved the food, although the lady serving us was always wearing slightly-soiled aprons and such.  Then one time my mom was in the Lexington hospital; my sister and her husband came to visit her, and we took them to the Chinese place.  There was a bird, bigger than a sparrow, flying around in there over the table and everything, all the time we were eating.  That did it.  We never went back.  It wasn't long before it closed. 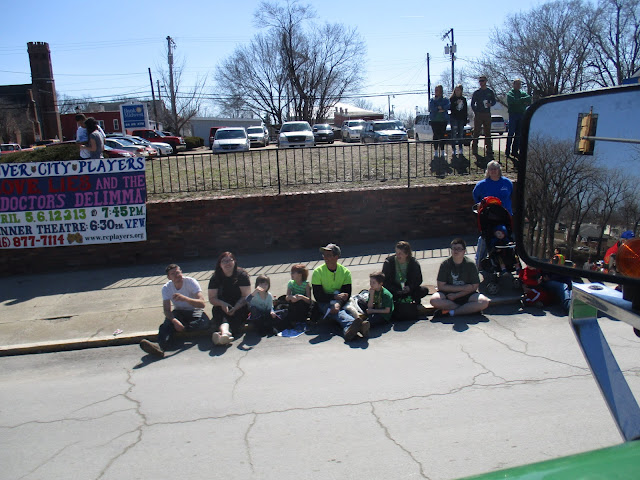 On the left you have Gerald and Monica, my granddaughter.  They are a couple.  The other people are Gerald's family.  When we came around the corner, Gerald was standing up bowing over and over.  He's a hoot, wish I had gotten a picture.  Monica took a picture of us on the tractor. 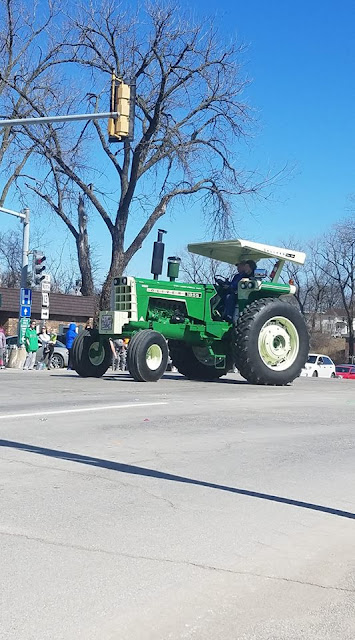 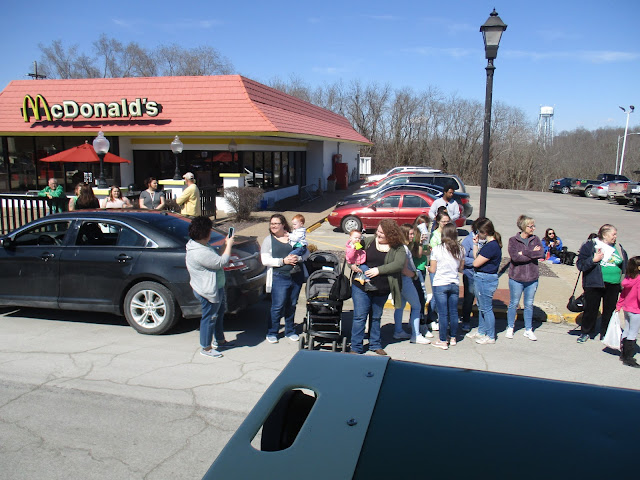 See the two ladies, each holding a little red-haired baby girl?  Cliff's brother, Phil, is their great-grandfather.  They are such little cuties. 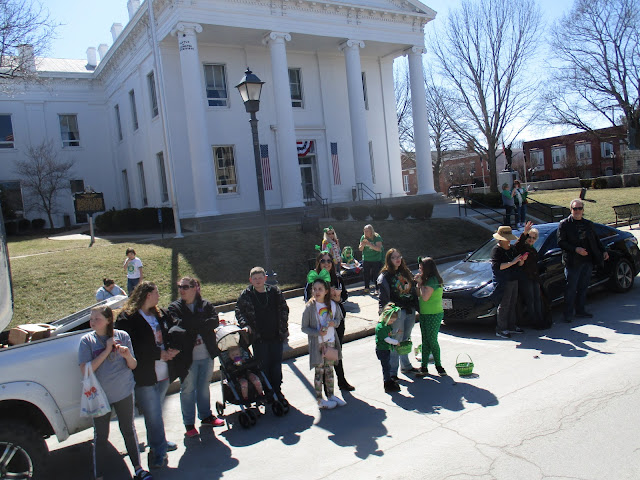 Just some of the crowd.  They have a good turnout at these things, even when the weather isn't the best.

So there you have it:  Our first tractor activity of the year.

I love this! Parades of any sort make me smile 😊. You are mighty blessed to be able to participate. Blessings, Penny

Happy St. Patrick's Day! Looks like a great day for your parade. At least the sun was shinning! Glad you could be out to enjoy it.

We have the best healthcare in the world if you survive it.

Oh Donna, these pictures absolutely made my heart SING! How I love old-fashioned things and this gathering.... with the tractors and the men talking and the children smiling and well, simply all of it.... is what is important in life! I love that folks are still doing it in your area. My daughter-in-law's father collects tractors... Allis-Chalmers ones. He goes to all the tractor gatherings in our area (and some that aren't "in our area" too). He has 3 daughters and no sons so he always grabs my son (his son-in-law) whenever they gather for holidays and talks his ear off about tractors. *haha* My son isn't into them either but he's a good listener. Thank you for sharing these wonderful pictures. Happy St. Patrick's Day. Love, Andrea xoxo

Great photos, and what a fun thing to do! It looks like everyone is enjoying the day and the tractors.