One man's story of growing up in the Waterloo Bottoms

Just a note from me before we start.  Cliff and I live at the top of a wind-blown river bluff that is popularly known as "Waterloo Hill".  This comes from the fact that before you head up this hill from the west on 224 highway, a mile from us, there is a small unincorporated place called Waterloo.  Nowadays there's only a handful of houses there.  What used to be the Waterloo Store is in the process of returning to nature, walls and roof crumbling and decaying.  North of that are the flat river bottoms where I so often used to ride my horse: that's where this story begins.  In the previous entry HERE, I explain how I learned this story and got permission to share it.  Notice it was written 11 years ago.  Some have been confused by this, placing Jim at a younger age than he is.

To write an account of my life to date seems a monumental job at this time.  Seventy-one years is a long time to try to reach back and come up with happenings that can only be recalled through my mind's eye and remembrances, but that is what I will attempt to do.  These memories will be what I experienced from childhood advancing through my present state of elder retirement.  A still youthful approach to life in spirit is enjoyed at this time.

(note from Donna:  At this point he gives birth and death dates of family members which I will omit, and some interesting details about the lives of his parents; I decided to move on to his own early recollections.)

These tender early years were spent in the Waterloo River bottoms, as my dad was a tenant farmer.  Some may not be able to recall their earliest years, but for some reason I have vivid recollections of my early life in the Waterloo Bottoms.  Our home was a three-room box type which consisted of a kitchen and two small bedrooms.  The old cook stove was a kerosene gravity-fed stove; there was also a stove that was fired by wood or corncobs.  There was a homemade kitchen table and chairs where we ate our meals.  As I think back on those early years, we probably lived on a subsistence-type tenant farm.  We had a cistern that caught rainwater off the roof for drinking.  I remember a smoke house where the saltbox held bacon, and hams were hung from the ceiling after being cured by my dad.  Meat was from hogs only, and I can remember Mom and Dad and myself sitting around the table with a kerosene lamp providing the only light, cutting up fat to be rendered into lard.  We had NO electricity, NO phone, NO refrigerator.  We had an icebox that occasionally would hold 25 pounds of ice if the iceman happened to come; or we would motor to Wellington (four miles) and bring ice home.  Mom would can the meat in quart jars in which sausage balls were suspended in grease that would harden and turn white in the jars; tenderloins the same way.

My dad's tenant farming gave us a third of what we raised.  Two-thirds went to the "rich" landowner named Gates who lived in Kansas City (to me this was a thousand miles away).  Our nearest neighbors were my grandmother and my mom's two sisters and brother.  We also had neighbors across the road, but no kids for playmates.  I literally had little contact with kids, except for my cousins who would come and visit at times.  I was always glad for company to come.

I guess the dominating factor in my life from ages one through seven or eight was the Missouri River, which was only 50 yards from our house.  I say "dominant" because it forced us out of our home to flee to higher ground, usually to Grandpa's house on Waterloo Hill, but occasionally to Wellington to live with friends of my parents in the old red brick house overlooking the Missouri River bottoms.  Usually we stayed two or three weeks.  As for me, I sort of enjoyed the company, away from Waterloo Bottoms solitude.  The River was not controlled by levies until the 1940's.  Therefore, we were at its mercies every year.  Coming back to our little house was not a chore my parents looked forward to, I can only imagine.  The house, which was secured to a giant elm tree by a cable to keep it from floating away, had to be scrubbed and shoveled out for all the sand that accumulated on the floors.

My poor mom repainted and worked hard to "make do" in the little shanty we called our home.  My dad would get down in the cistern by lowering an old wooden ladder, scooping sand and water out with buckets.  How the final cleaning was done, I am not sure!  I can remember being in a small boat coming down into the bottoms to check on our home and belongings and having to duck our heads as we passed under the telephone and electric lines that went to our neighbors.  The only plus from that constant flooding was that I had the biggest and best sand pile in my front yard that any kid could hope for!

Living as close to the river as we did, I was severely cautioned about getting close to the water due to the peril of drowning.  I cannot swim well today because of the fear I had as a young boy.  I recall going over to the levy, standing on it and shouting up the river so as to allow my voice to come back as very distinct words rebounded as an echo... off the water and dikes, I suppose.  As I remember, some of them were those "cuss words" my young aunts had taught me to say at a very tender age.  I really thought the river was sort of magical in a way, to be able to echo my words.

These experiences have left a permanent,  indelible impression upon me, and I wouldn't trade for anything the ways they have impacted my life. 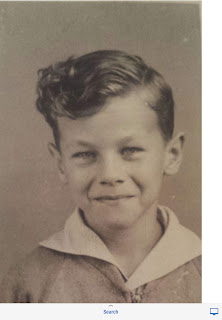 Click HERE to go on to the next chapter.
Posted by Donna. W at 5:33 AM