Cooking with the little princess can be risky

The child has been helping me mix and measure the ingredients for pancakes for a long, long time, probably since she was around 18 months old.  On her first attempt at cracking eggs, she ended up with no pieces of shell in the end product and no busted yolk.  Unfortunately, she didn't get it in the cup, so it slid around on the counter... but other than that, she did great.

At first I'd let her mix the dry ingredients with a spoon.  Before long, I began measuring out the liquid ingredients and letting her pour them one at a time in a separate bowl from the dry ingredients.  Then I let her use the hand egg beater (given to me by a long-time follower of my blog when my old one broke).  She wasn't really well coordinated enough to do it rapidly and well, but I'd let her do it awhile before I needed to take over. 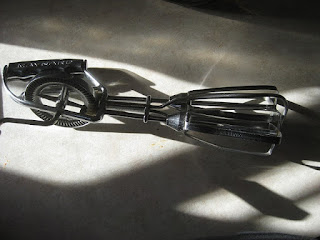 Nowadays I get out all the ingredients and set them on the counter, but let her pour them in appropriate measuring cups, and then pour them into the mixing bowls.  I still do some of the measuring, but talk to her about it as I do ("this is one cup.  This is 1/2 a cup.  Which cup is bigger?").  I do let her level the measuring cups and spoons with a knife for me.

Today I felt adventurous and asked her if she'd like to do the actual cooking.  Oh yes, she was excited at the offer.  I preheated the cast iron skillet, one of my larger ones, and had her get on a kitchen chair as close to the hot skillet as I dared to put her.  I made batter for a lot more pancakes than we actually needed (Cliff and I only have one good-sized pancake each, since we're back to watching what and how much we eat).  I told her she could practice with a few small ones.  I half-filled a glass two-cup measuring cup, thinking I'd guide her on how much batter to put in the pan.  I set it beside the skillet, turned around, and in that instant she poured more than a cup of batter in that pan, where it ran all over the bottom of the skillet.  It now sits on the stove with water in it, waiting for me to clean the mess. 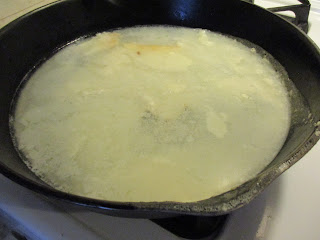 I grabbed another skillet and forged ahead.

Part of the problem with the actual cooking was that she had to follow my instructions about not touching the hot skillet.  It was awkward for my little vertically-challenged charge to reach to the middle of the skillet without touching the edge.  We made a couple of tiny practice-pancakes, then a larger one.  Once it was done I was going to put it in the practice pile, but she wanted it eaten.  So Cliff had a rather imperfect pancake.  We did another practice, then she said, "This one is going to be mine."

While she was eating, I made my own pancake.  By the time I was done with mine, Little Princess had finished hers, and we made a couple more practice pancakes just because we could.  She's already getting better with flipping them.

She isn't ready for the big time, but she'll make somebody a great little cook someday.  Although as independent as she is, I'm not sure she'll want to cook for anybody but herself.

After making this entry, I thought I had better return and add one little thing I left out.  You know, in the interest of full disclosure:  When I turned back toward the child and saw her in the process of pouring a cup-and-a-half of batter in the big skillet, I yelled, "Oh, no!" loud and sharp.  The smile left her face and she puckered up.  I immediately put my arms around her, apologized for yelling, and told her she was doing great for her first time, and that she just needed a lot of practice.  She cried into my shoulder for 20 seconds or so, and we returned to cooking with her hurt feelings soothed.

Oh, and I'm going to look for a cheap griddle for when our little chef is making pancakes.  With no tall sides to avoid touching, she'll be able to maneuver a lot more easily.