We've missed riding our motorcycle lately, but the extreme heat makes it miserable, as you can imagine.  Last night I told Cliff, "What we need to do is head out early in the morning, before it gets so hot."
These days Cliff is up by six A.M. most days, and he agreed we'd try it.
"Let's eat breakfast at McDonald's in Blue Springs, and then hit Blue Springs Walmart to get the stuff our usual little Walmart doesn't stock." 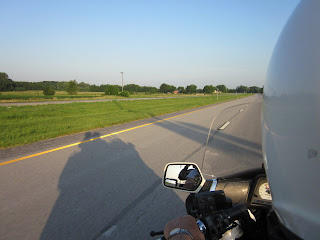 We left before 7 o'clock.
Cliff likes to snack on chocolate animal crackers, and the closest Walmart doesn't stock them.  He also wanted to buy some suspenders, another thing we couldn't find there.
At 6:45, the temperature was perfect for a ride, and it was great to be on the motorcycle again.
I've never been a big McDonald's fan, but now that we're on a limited income, I'm learning to appreciate their prices.  You can get two senior coffees, a breakfast burrito, and a sausage McMuffin for $3.  This morning I made the mistake of ordering an orange juice instead of coffee, not knowing it was going to cost almost $2.  That won't happen again.  As we were eating, I looked around and noticed that 80% of the folks in there were our age or older.  And why not?  Two people can have breakfast for the price of a single glass of soda or tea anyplace else, and there's nobody to tip.  I know, the food isn't good for us.  But we don't eat there that often.
I have badmouthed the Blue Springs Walmart many times; it seems to draw rude people like a magnet, and it's always overcrowded.  But we had never been there at eight o'clock in the morning.  What a treat it was, having the aisles mostly to ourselves!
My Dave Ramsey envelope system gets a little tricky when I'm shopping at "the Walmarts".  We bought Cliff's suspenders, which took $10 out of the clothing envelope; cat food for a cat that visits our barn often, $3 out of the "critters" envelope; animal crackers and four peaches, $3 from the grocery envelope; the generic equivalent of Tylenol Extra Strength, $8 from the "Drs. and Meds" envelope;  and the cheapest telephone we could find, $6 from the "misc" envelope.  I pay for everything at once at the checkout, so I try to take the money from whatever envelope it's in and add it to the grocery envelope as I put the things in my cart.  Trouble is, sometimes the exact change isn't where it's needed; that's where it gets tricky, and I end up owing an envelope some change when I'm done.  For the most part, it ends well, but Cliff shakes his head a lot when I'm doing all this.  It worked a lot better today, with the store not too crowded to move.
There's a reason I got a cheap telephone:  When you tell Century Link you don't want a home phone any more, they give you a different number that leaves you with a phone that other people can call.  The only number that works to dial out is 911.  Most people I know who have gone this route remove their home phone entirely, because they have unlimited calling on their cell phones.  Cliff only has 500 minutes.  It helps that he can call anyone on T-mobile without using his minutes, because several of his relatives are on T-mobile.
Now that I have a prepaid phone, I don't answer my cell when it rings.  I have it in case of emergency, for instance to call Cliff if I had to, or so he can call me in a pinch.  So I've given our home number to people who aren't on T-Mobile who might want to call me.
However, the fancy-schmancy cordless home phones we bought three years ago have done nothing but confuse us, and lately the one in the living room wouldn't charge enough to talk for more than five minutes.  Today we bought a corded phone that has no answering machine, needs no charging, and has nothing to confuse us. I love it, and buying it didn't break the bank.  I don't mind not being able to carry it from room to room; we don't get that many calls on it.
We got home from our ride around 9:30; it was already starting to get uncomfortably hot.  Next time we might leave a little earlier.
Posted by Donna. W at 3:15 PM

We have a Super Walmart here and Ken and I do our grocery shopping very early in the mornings. Works lots better. Helen

My husband LOVES going to McDonalds for breakfast. He gets scrambled eggs, with hot sauce, oatmeal and senior coffee. On Tuesdays they have Senior Days and BINGO. And two women walk around taking blood pressures. Glad you enjoyed your breakfast and morning ride.

It's been very hot here too. Even early in the morning. It's very hard to adjust to as we have been unusually cool prior to this. Glad you were able to get out anyway. Hope your Saturday is a cooler day.

I have to admit I enjoy a McGriddle once in a while although without the bacon as they don't cook it enough. I don't like raw bacon. GAG!

It has been extremely hot here for us in the north! It's been in the high 90's and even 100* in some places. I have missed three days of riding the new guy Scoot but it's been way too hot for him and for me. I have been putting them out very early in the morning to beat the heat then they stand in the barn under the fans the rest of the day only going out for little jaunts.

I have so many friends and relatives on the Dave Ramsey program and they love it. We offer it at our church several times a year. It's been a huge help to some of the young people that got themselves into credit card debt and such, they've cut that way back or completely paid it off. Great program although I can see where it gets a bit tricky when paying for certain things out of different envelopes!