Cliff never minded if people smoked in his shop.  He did mind if they just threw their butts on the floor, because he likes to keep it as clean as possible; but not too many people did that.  He kept a coffee can half-filled with sand or Oil-Dry out for them to use as an ashtray.  In good weather when they sat outside to smoke, he still wanted them to throw their butts in the coffee-can, because those butts tossed on the ground stay there forever and really add up over time. 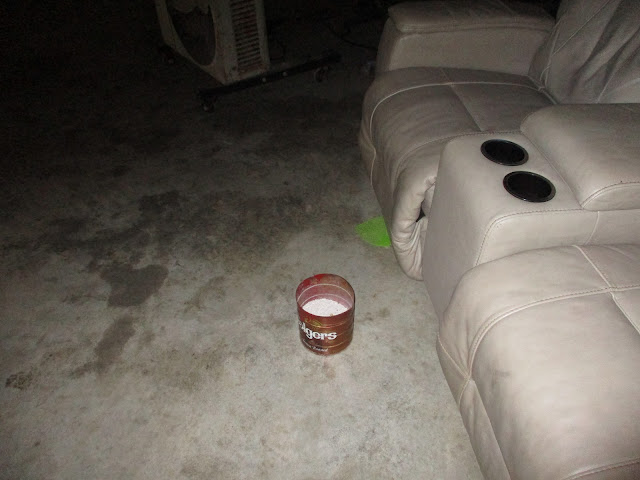 Since the grandson bought the place, he enforces Cliff's rules; it's his shop now, but he likes the rules.  He quit smoking cigarettes a long time ago; you might see him smoking a cigar on Friday night after work, and maybe a couple more times over the weekend, but that's it for him.

Saturday night a bunch of his buddies came over to hang out in the shop, and I guess they were up pretty late.  When Arick opened up the shop the next morning, he saw that the cigarette butts had somehow made their way to the floor around the can.  He went over to assess the situation and realized that somebody(?) had raked the butts out of the can and replaced them with a pile of poop!  His dog had been out there with him and his friends the night before, but he couldn't imagine his Golden Doodle dog digging cigarette butts out a can and then pooping in the can while the guys were all out there.  Wouldn't someone have noticed?

About that time, out of a far corner, Blue the cat came out stretching and yawning:  He'd been locked in the shop the previous night, and he was surely the culprit!  Apparently in the process of digging in the oil-dry he had raked the butts out onto the floor.  But can you picture the position a grown cat would have to get into to poop into a metal coffee can?

Wow.  Obviously my cat was too proud to "go" on the floor.  Truth is still stranger than fiction. 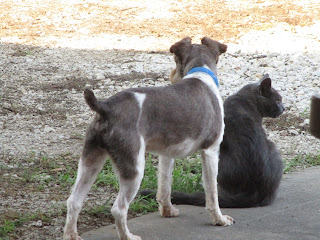