Albums that have influenced my musical tastes

Last week I took a Facebook challenge:   My task was to choose ten albums that greatly influenced my taste in music. One album per day for ten consecutive days. No explanations, no reviews, just album covers.

Cliff asked why I didn't include a Jerry Lee Lewis album, since we've had several of them and were crazy about Jerry's egotistical way of playing piano and singing.  I told him Jerry Lee really never influenced me in any way... I just liked his music, that's all.

I didn't go by any certain order during the ten days I did this, I simply posted the first one that came to mind each day that had influenced either my taste in music or in some cases, the way I thought and felt about certain things.  I had no trouble until today, the tenth day of posting an album cover, but while Gabe and I were taking our walk, the perfect choice came to mind.  So without any further ado, I'll share my choices, and my reason for those choices. 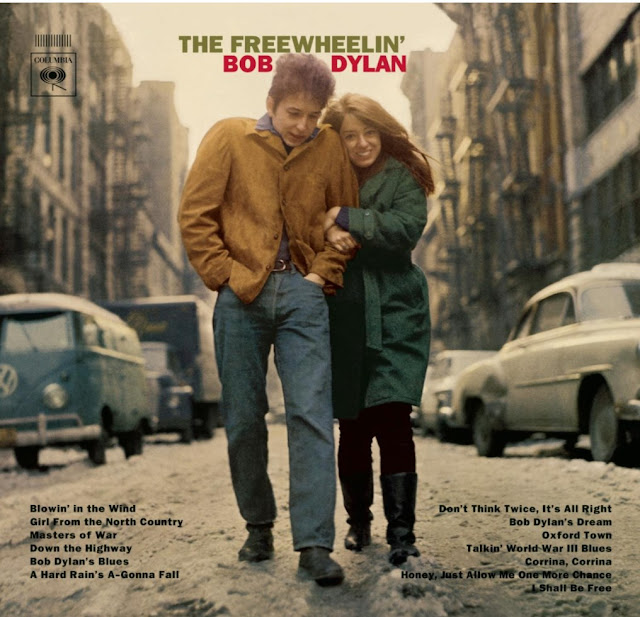 I bought the album pictured when I lived in an apartment in Kansas City from 1962 to 1964.  Martin Luther King was in the news, and Bob Dylan had taken up the cause of civil rights, at least in some of his songs.  I saw college kids going down to help with the cause, "Blowin' in the Wind" spoke to me. I sometimes felt the desire to go help out myself, but it was never anything I'd really have done, because what would people think if I quit my minimum-wage job and went down south?  And even if nobody had cared, I know I wouldn't have had the nerve to try such a thing; I didn't even have the nerve to tell anybody about my feelings on the matter.  But I sure turned on the news every night after work to get my Walter Cronkite fix, and watch those brave students risk their lives and, sometimes, lose their lives. 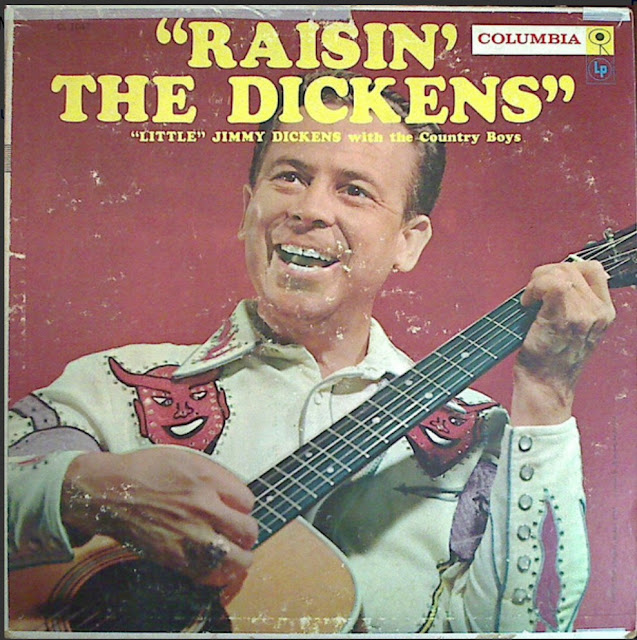 This isn't the way our album looked, and this one was done in 1957; but it has the same songs that were on the album my mother bought around 1950-52.  My parents didn't keep the radio playing all the time, and they never listened to the Grand Ole Opry, but they sang a lot around the house; and what they sang was usually old-fashioned hillbilly music and church songs.  My first record player was a wind-up Victrola my parents bought at a one-room country school house that was closing its doors.  Mother bought two record albums that I remember, the kind of albums that contained six 78 RPM records in sleeves, two songs on each record.  There was one by George Morgan and one by Little Jimmy Dickens.  I listened to the songs on each one, but it was Little Jimmy Dickens who had my heart:  His songs were funny!  My favorite was "Country Boy", with words that were quickly learned by heart.  My favorite lines went like this:  "Now every time the preacher came, Ma always fixed a chicken.  If I reached for a drumstick, I was sure to get a licking'.  She always saved two parts for me, but I had to shut my mouth:  Twas the gizzard and the north end of a chicken flyin' south."  I left country music in the 60's, but when I wanted to learn to chord on a guitar in the mid-60's so I could sing folk songs, I came back to the music of my childhood because most country songs were simple to chord to, they only had three chords.  So I loved Little Jimmy Dickens from his youth, right up to the day he died at the age of 94.  He is the artist who made me want to put a little humor in my stories and songs. 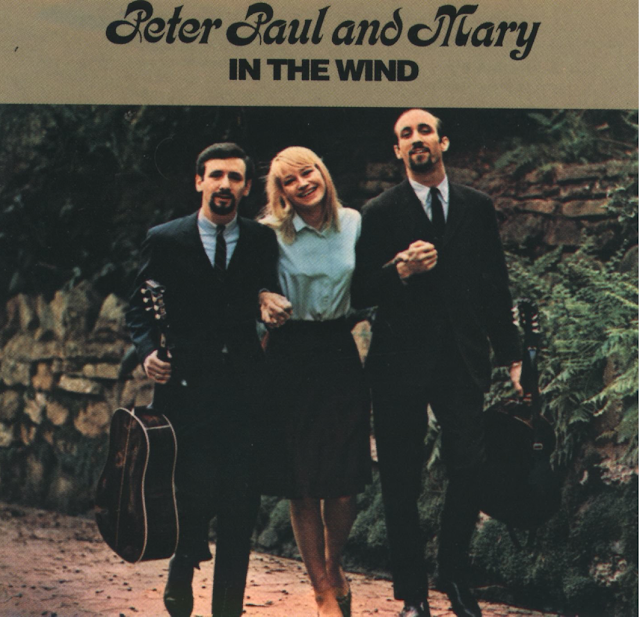 I think Peter, Paul, and Mary introduced me to "Blowin' in the Wind" before I even heard of Bob Dylan, author of the song.  But they sure did make it sound good, and they were part of the reason I wanted a guitar so I could sing their songs.  I never got good at playing a guitar, but at least I had accompaniment when I sang.  Plus, some folks from church liked to get together to sing and play.  I could sit in with them and strum along; if I got stuck or didn't know which chord was next, someone would tell me or show me.  In this period of my life, I also met my first boy friend (I was 20).  We were pretty serious, but he eventually realized I wasn't quite normal and jilted me for somebody else.  Best thing that ever happened, because if I'd married that guy, I'd have lived my whole, miserable life without ever living in the country and owning cows and horses... and because he would never have been the wonderful husband Cliff is. 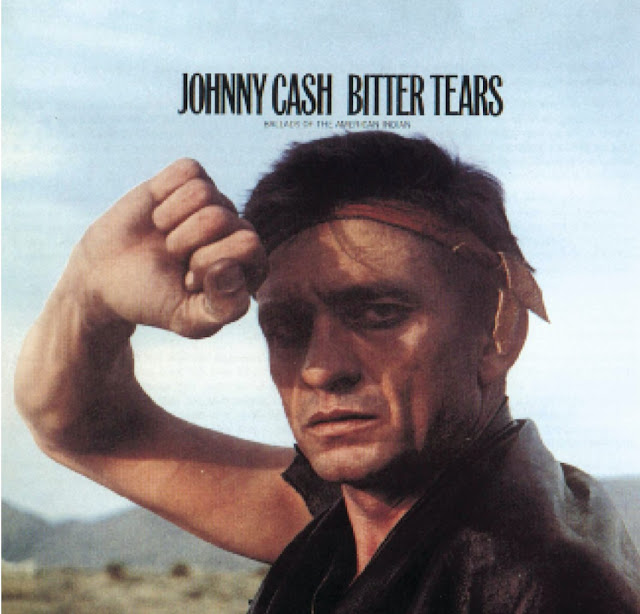 I imagine by the time I bought this album, I had at least half a dozen others by Johnny Cash.  I always liked him.  But I bought this album especially for the ballad "Ira Hayes".  I've always felt bad about the way Indians were treated, always wished I WERE an Indian.  Ira Hayes is such a sad song, a war hero who helped raise the flag at Iwo Jima dying a hopeless alcoholic.  Is there anything sadder than watching an intelligent, loving person choose alcohol over life, and disappear before your eyes?  Doctors hadn't even come up with the term PSTD yet.  Back then it was referred to as "shell-shock". 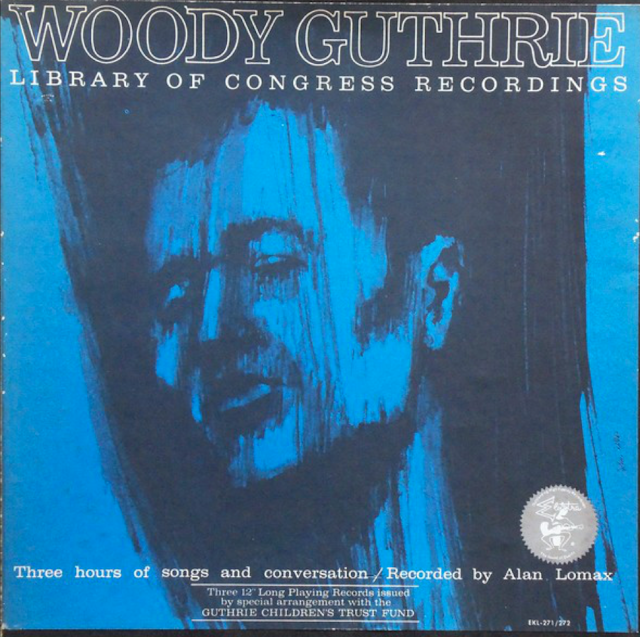 I was still single when I bought this collection I found at a record shop in downtown Kansas City, and very much into the folk music.  I subscribed to some folk magazine, and bought books about how Alan Lomax, Pete Seeger, and so many others searched out the old songs of our ancestors in America.  On these records, Alan Lomax and Woody sang songs, talked, and had a drink of some kind of adult beverage every now and then.  I practically had all the stories memorized, I listened to this collection so much.  Woody had a terrible childhood and a terrible death at age 55 from Huntington's Disease.  Below is one of my favorite stories told by Woody on the Library of Congress recordings.

"Well, I was adopted then by another family of people that had a little more money and a little more everything, and was members of the very high and important lodges around over town, and they said it was a pity that so many of us had to live the way we did and not know where our next bite was coming from. So they said that in order to relieve me and the suffering of this family too that I was living with that they'd take me up to their house and I could live with them. So I went up and lived with them, and they had a little old bantam hen. It sat upon that icebox and roosted out there like she owned that whole part of town and my job, mainly, while I was living with that family of people, was to keep track of that cursed bantam hen. I'd have to go find her eggs, where she'd laid the egg, what time of day she'd laid the egg, bring the egg in; I'd sort the egg, lay the egg up, tell the lady about the egg, then go show her the hen, and then she'd go out and pet the hen. And then when night'd come again I'd have to go get the hen again and set her above the icebox to where she could be safe from all harm. And I used to carry her hay fourteen blocks across town from a table in a tall sack. I'd have to make a trip or two every month, by George, to get that hay for the bantam hen. So I thought well, hell's bells, rather than be a chambermaid to a bantam hen, ladies and gentlemen, I'm gonna take to the highways. So I went to Galveston, Texas. Went down to see the Gulf of Mexico and the ocean and all such stuff as that. And also, I knew some people down there and pulled figs in all them orchards down in that country and helped drill water wells and irrigated strawberries and helped a carpenter down there to tear down a whole bunch of houses and post a bunch of land off. And at that time, I was about eighteen."

I've taken up so much space on this entry, I'll have to my other five albums in a different entry.

I love the stories behind your choices! I know quite a few of the albums, but not all. I'm doing the 10 day travel challenge and it's hard not to include where the picture was taken and tell what was going on.

How interesting, Donna! I loved reading this blog entry. I can't even name one album that has "influenced" my taste in music today!! I mean, as you said, I can think of all sorts of albums and artists that I've listened to over the years.... simply because I liked them. But my taste in music has changed so much over the years that I don't even think I like the same music today, that I liked 15 or 25 years ago. I love music but my taste swings as much as the weather, from decade to decade.... even year to year sometimes. So I think my answer would have to be "No album has 'influenced' my taste in music today." Love, Andrea xoxo

great blog post. loved all the albums. and your commentary. lots of terrific songs.

I was a great fan of folk music and had many Peter Paul and Mary albums!

I was not invited to pick albums, but I had fun thinking about it. The Blowin' in the Wind album you picked was among the lists I created. I two Bob Dylan albums "Blood on the Tracks" and "Desire" that were on the short list.