Visiting my sister in her new home

Jonathan apples have been picked at the local orchard.  My sister, her son's wife, and a grandson's wife wanted some Jonathan apples and couldn't find any for sale in Oklahoma City, so I volunteered to take some to them.  Honestly, I just wanted a good excuse to visit my sister and see how she was doing after her latest move.  When I got their apples from the orchard, the lady there said they hardly sell any Jonathans; she said if they took them to Arkansas they could sell them, because they still cook down there.  The owner of Rasa Orchard told us a couple of years ago that they would eventually take the Jonathan trees out; he said Walmart won't even buy them from him.  I would think they would at least keep half a dozen Jonathan trees for the few people who want them.

We had no problems at all with traffic, either going or coming home.  It was a smooth trip all the way around, and we had a lovely visit.  Maxine's son, Larry, with his wife, ate lunch with us.  They thought it would be the only time we could visit with no interruptions, since they were in charge of their three grandchildren while their daughter-in-law is away on a job-related trip.  Two of them are in school, and the youngest is in preschool for four hours or so.  There's another child (a girl) on the way.  These three are a lively bunch, and it was a hoot trying to get a good picture of them together.  I do have pictures, so without any more delay I'll introduce you to William, age 2, who decided I am the devil and refused to even look at me; Benjamin, age five; and Caroline, I believe age 7.  You will see by these shots that my nephew and his wife have their work cut out for them.  They brought the children by to see us after picking them up from their schools, and I just wanted a picture of the kids.  Benjamin is missing in the first picture, having gone on a search for an M and M’s. 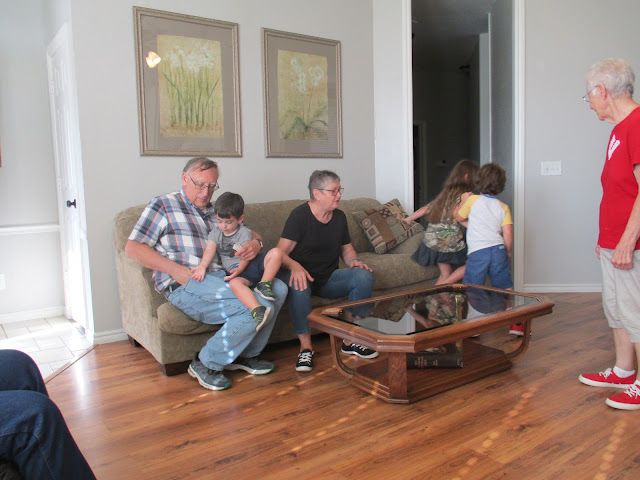 Benjamin came and got his sister.  I guess he figured she'd like an M&M too.

Great photos! It's funny how kids take likes and dislikes to people for NO reason. They are like cats. :)

Sounds like your sister has moved closer I think she used to live in Texas. Glad you too can visit easier now and found the apples she was looking for. I haven't been out to our local orchard yet, but they usually do have Jonathans there. They are a favorite of mine. Hard to believe apple season is here already!