Getting down to the nitty GRITSy. Among other random thoughts.

After reading the book "The Best Cook in the World", I was left wanting to try all the recipes listed in it, especially the one for grits.  The only experience I've ever  had with grits was when my kids were small:  my mom had an Avon customer whose husband was a trucker, and he mysteriously brought home all sorts of sugary cereals and other such prepared foods that were "left over".  I thought nothing of it at the time, then lately as I think about it I realize he may have actually been stealing it from work.  But that's none of my business, whoever the guy was.  "Be sure your sin will find you out".  That's Numbers 32:23 in the Bible.  Now, back to my introduction to grits:

Among the other food items (ill-gotten gain) Mother passed on to me from the trucker's wife was instant grits.  I had no idea what one does with grits, but it looked a lot like Cream of Wheat, so that's how I fed it to my kids, after tasting it to see how it was.  After that, I had no interest in grits.  Cream of Wheat was available in stores, so why buy an imitation?

But this book made me long for the actual experience of eating old-fashioned grits like it was fixed by the poor mountain folks in the Appalachians.  My first problem?  I couldn't find anything at Walmart but quick grits.  Also, the recipe I was following called for yellow grits, and I haven't found those anywhere for a reasonable price.  I did find some old-fashioned white grits on Amazon, and settled for those.  This morning I halved the author's mother's recipe because I already had breakfast.  This was my first mistake; I should have cooked the grits according to the box they came in, since the grits I cooked were so dry as soon as I mixed them in, I knew something wasn't working.  I kept adding water, as little as possible each time, to be able to even stir it.  However, after all that effort and thinning, when I added the small amount of cayenne, some black pepper, and a hunk of butter to the finished product, Cliff and I agreed that we both like it.  We were quite surprised.

Remember a while back when I said I was going to take a break from Words with Friends for a few days?  Well, I did that, but it didn't cure me by any means.  I am still addicted to the game.  Now I will tell you, if you aren't familiar with how the game works, that some of the words they let you use are ridiculous, words like "QI" or "hae".  But if you just make up a word that isn't a word, the computer won't let you use it.  You eventually learn to roll with the flow; it they count it as a word, I'm going to use it.  You gradually memorize all these "non-words" that aren't really words, so you can use them in a pinch.  There have been two people who have complained about the type words I use.  There is a rather primitive message system that lets players chat as they play; I'd rather it weren't there, since it's often used by spammy folks acting like they are army majors looking for a poor old woman to take to the cleaners.  I found if I take my own picture off my profile and either put my dog or a picture of my husband and me together, nobody tries to romance me.  But here's the message that went on between me and some person I'm playing today: 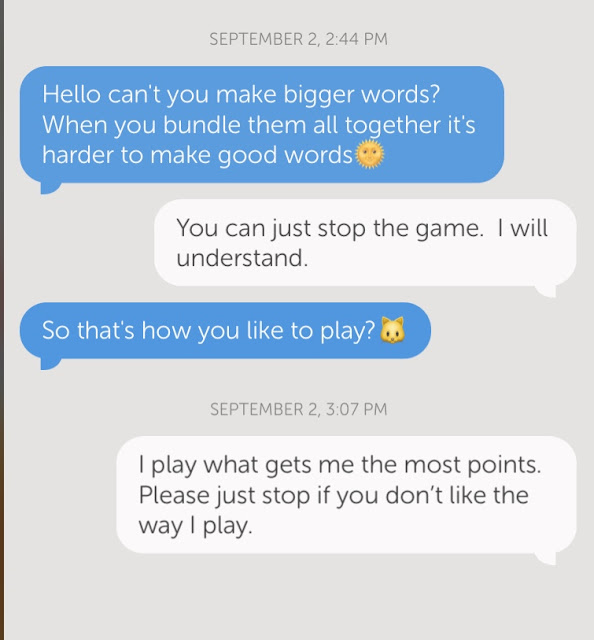 That's the last I've heard from the person.  Below is the game she/he and I are/were playing. 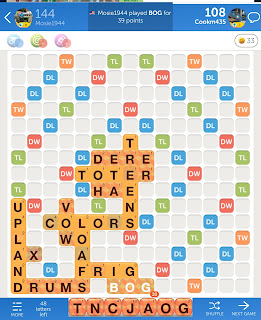 By the way, that individual wasn't as rude as the other guy (below) who complained using cuss words.  He accused me of not using words at all, although the game was accepting them as words.  I assume he meant to type "this guy" instead of "this gay", but who knows?  Since he seems to be a word expert, he could be anything. 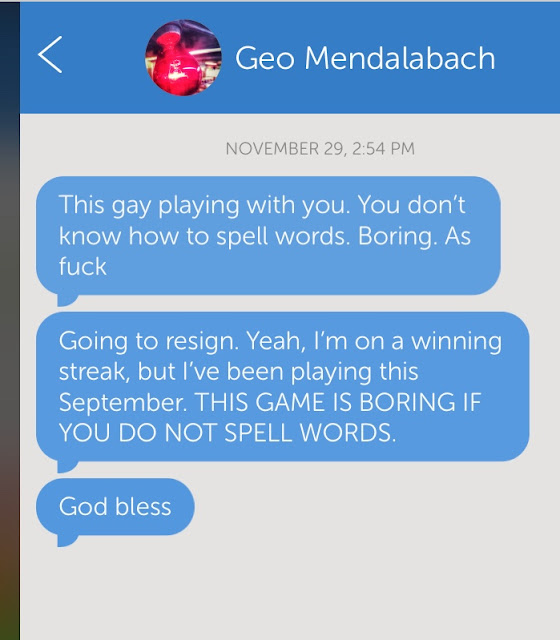 Oh yes, you run into all types playing Words with Friends.

I was introduced to grits my first trip south when my husband was stationed in Mississippi. It seemed like every meal wa ate, breakfast lunch and dinner came with the meal event hour not ordered. I do like them but don't fix them much, there at so many other choices, they fall way back in my things to cook list. Your game sounds interesting, but I'm to good at games of any kind and prefeer playing them with real people when I do.

HATE GRITS! The trucker may not have been stealing either. Sometimes they get boxes that are damaged and refused by the person they are delivering to. The company that sent the product many times have it marked on an invoice damaged and it is to be destroyed. The driver destroys it by taking it home. As for WWF. I took a break. I think I am ready to play again. Qi is a word I have been using for years. My mother taught it to me as a child, aura. QUA is another oddball word- Latin. Mama taught me that one also(she took 4 years of Latin in high school) Ki and Chi are also like Qi- energy, aura. I tend to get the dictionary out when someone uses a word I do not know. WWF is an international game. If only English words are being used, many of our words would be eliminated as not all words are English-taco, burrito, pizza, cafe, etc.

I'm addicted to Bingo Blitz... gotta play it every (early) morning over my coffee. Today there's something wrong with my internet connection as it's slower than molasses so my game will NOT load... and I'm sad and not the least bit feeling "withdrawn". *haha* Love, Andrea xoxo

I'm addicted to Wordscapes but don't play against anyone. Now I'm relieved I don't!

Yeah, I thought the point of the game was to score the most points. I’ll play with you anytime, I use the short words I’ve learned. I rearrange letters sometimes and hit on a word. BFF and I think MN works too if you haven’t seen those already.
I like grits over a couple of fried runny yoke eggs. Then I cut it like I’m cutting it in squares so the egg will be in bite size pieces and mix it all together. I like toast with jam or preserves with it. Sometimes I eat just the jam or preserves on the side without toast.
Take care, Sheila