First of all, let me say that perhaps going on a road trip the day after Cliff had been under the effects of anesthetic might not have been the wisest thing we ever did.  He wasn't quite himself at times.  His calves ached, he said, like they would if he had done some new exercise workout, and he had quite a limp all day Friday and Saturday.  At one point he got downright pale, although he didn't like me asking questions like "Do you feel all right?"
He would answer by grumbling, "I'm FINE!"
We have no idea why a procedure that was done through the esophagus would make him have sore legs.

The main reason we went to St. Louis was to visit his sister and her husband.  We had not seen them for quite a while, and we missed them.
Pat wanted BLT's for supper Friday evening, so we all went to the Des Peres Schnooks store, my favorite grocery store ever, to buy some bacon.  Brother-in-law Pat is a salesman, outgoing and friendly, so most of the employees at Schnooks wave to him and Charlene, often calling them by name.  The two of them often meet there after work to eat supper.
There was a lady giving out free samples of some delicious, albeit expensive, cheese.  I really wanted to buy some, but cheese isn't the healthiest thing a person can eat, so I kept my mouth shut and overcame my desire.  On the way home, I mentioned that I had been lusting after that cheese, only to find out that Cliff and Charlene had been having the same thoughts.  Once we confessed to one another, Pat said, "I just happened to pick up a $2-off coupon for that cheese."  So when we went back to the store Saturday to eat pancakes for breakfast, we bought some.
The cost of living must be a lot higher in St. Louis, because all the grocery stores have higher prices.  Taxes are steeper, too.

Back when we rode motorcycles with Charlene and Pat in the St. Louis area, I noticed a state park just off the freeway that had something to do with Route 66.  Nobody else saw it, and I believe they thought it might be a figment of my imagination.  So I looked it up on the Internet when I got home from that trip.  When Charlene emailed me the other day with suggestions of things to do and see on our visit, I told her I really wanted to visit the Route 66 State Park. 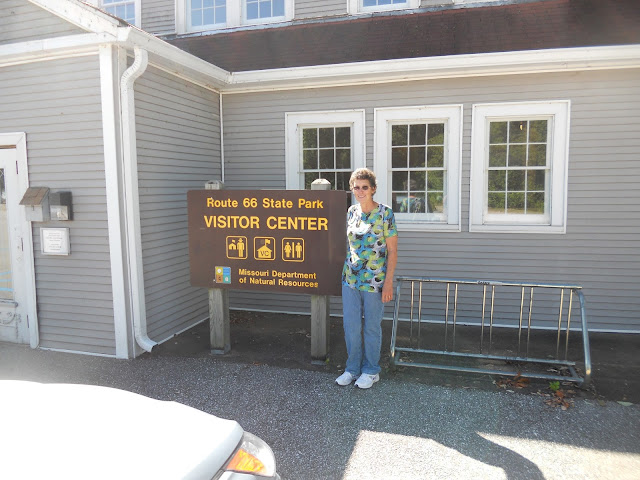 Funny thing is, it wasn't that easy to find.  As I said, Pat is a salesman; he travels that freeway often on his route, but he had never noticed the signs about the park, so he was as clueless as the rest of us on how to find it.  There are two different exits to take to the park, but you can only get to the visitor center from one of them. 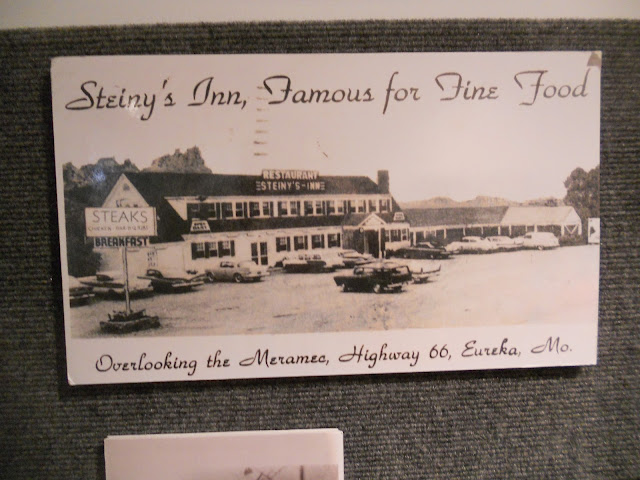 The visitor center is housed in a building that used to be a roadhouse in the 30's and 40's. 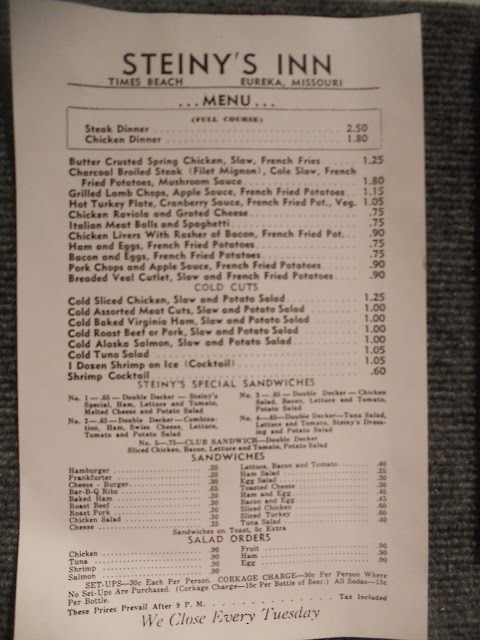 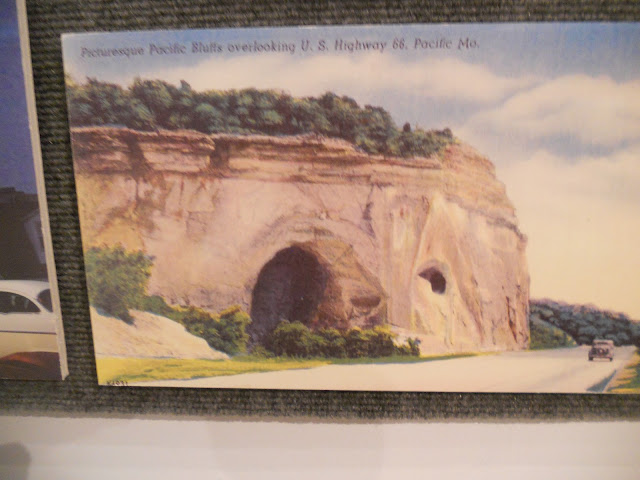 Among the mementoes was this old postcard.  Pat recognized the hill, saying there was a flag at the top these days, with a fenced area around it.  He always wondered, he said, what was up there.  So after buying a couple of souvenir coffee cups (have I mentioned I'm a sucker for coffee mugs with stuff written on them?), we set out to see the hill. 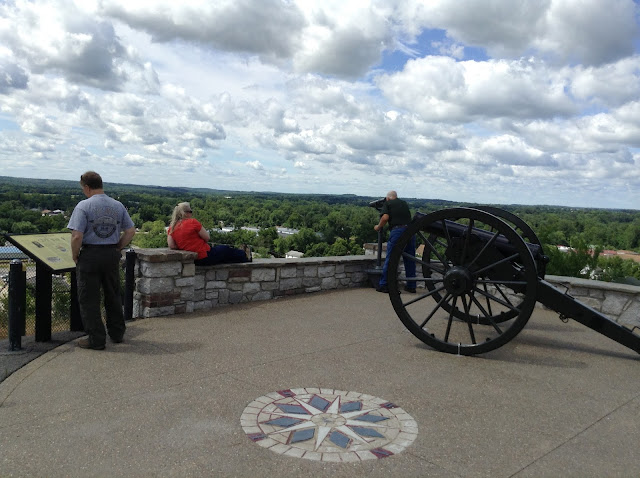 This is what we found:  a nifty little place with markers commemorating a Civil War battle that took place near Pacific. 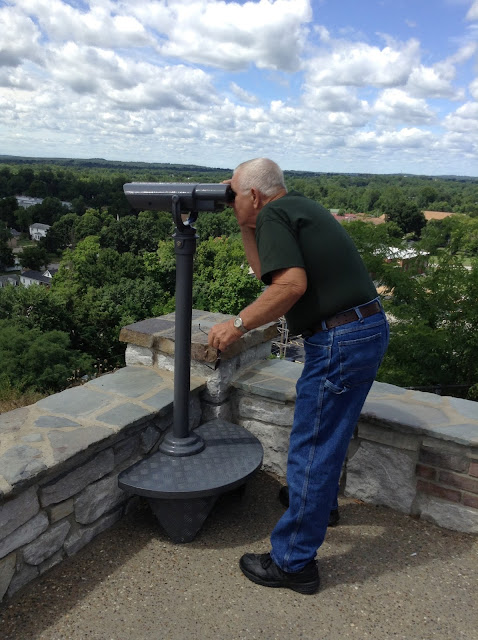 I accused Cliff of peeking into the bedrooms of the residents of Pacific, Missouri.  There is something about this picture that I really like, by the way.

So in spite of the fact that Cliff wasn't at his best, we had a good time.
Posted by Donna. W at 8:13 AM

You both look great and the activities sound fun. That is weird about Cliff's calves. Maybe he was stressed and tightened his muscles there which would make them sore afterward. P.S. I always crave cheese!

Nice trip and some nice pictures too. You both do look fit and trim in the photos. Glad you got some of that good cheese.

Two day jaunts are just about the perfect amount of time to be away from home. I enjoy St. Louis -- but haven't been there to stay overnight in maybe seven years. We used to go often -- but now it's Branson for us. Of course, we have no relatives anywhere but Houston so hotels are expensive.

Sounds like a nice trip. My younger daughter lived in St. Louis for a while. The only part of it I got to see was her duplex when we moved her home. Looks like you saw some great stuff there.