When Celeste called Tuesday evening to say they wouldn't be here until Wednesday, I told her to let me know when they left Moberly, Missouri, the town where they had camped out for the night.  So yesterday when she called as instructed, I told her we would ride toward them on 24 highway and meet them at Casey's General Store in Carrollton; I thought it was right on 24.  I told her if there was any problem hooking up to call us.

"Trying to meet someone like that never works out," Cliff told me.  "Somebody ends up waiting on the others forever, or something goes wrong.  Are you sure there's a Casey's in Carrolton?"
"What could go wrong?" I asked.
Silly me.  I forgot that half the roads in Missouri are "under improvement".  Just as we got to the edge of Carrolton we were re-routed onto a detour.
Then after asking a resident, I found out Casey's wasn't on 24 anyhow.  It's on 65.
Thank goodness Celeste follows orders well.  She called and we met at a BP station; there they were with their motorcycles.  All's well that ends well, and we escorted them, through all the detours, to our house. 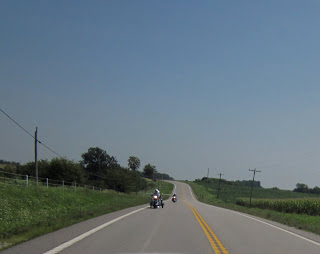 This is the only shot I have of them so far.  Hopefully I'll remember to take a picture of them before they hit the road for Reno, Nevada, today.
I fixed them enchilada casserole for lunch and cheeseburgers for supper; Celeste asked, "Who are we eating?" and I told her it was Sir Loin.
For desserts we had bread pudding and peanut butter cookies.  Since I never make these things for me and Cliff, my husband was a pretty happy camper.  "I don't know when you've made cookies," he said, munching away.    This morning we'll  have biscuits and gravy, another rare treat around here; that should adequately get the travelers through the first part of the day, a day that is predicted to be considerably cooler than the 99 degrees of yesterday.
We saw an article in the Gold Wing magazine once about a group of motorcyclists you can join where you host other travelers as they pass through your area, giving them bed-and-breakfast for the night; they, in turn, will take you in when you're near them.  It seemed like a great idea until I saw pictures of some of the residences:  These were well-moneyed folks with mansion-like residences where this crass hillbilly would never be comfortable, and I couldn't even imagine them spending the night in our mobile home; so we thought no more about it.
However, I have followed Celeste on her blog and on Facebook long enough that I knew I would be comfortable with them staying at my house.  So this is working out just fine.  Maybe we should start our own bed-and-breakfast group for ordinary, not-so-rich people.
Posted by Donna. W at 5:34 AM

Glad you and your friends were able to hook up and that you had a wonderful time. Everything sounded YUMMY! Do you have leftovers? Me, I'm not a bread and breakfast kind of gal. But it sounds like you might have a plan.

Glad to hear that your visitors made it there safely. That heat must be terrible to be out in. Being the city girl that I am most of the time I would be indoors on such a hot day. Hope you all have a great time and enjoy the visit.

Glad that you finally got together.
Helen

Sounds good to me ~ would be my kind of place! Moberly is our nearest "larger" town, and the few times we head to Carrollton.. we always have trouble getting OUT of that town for some silly reason. Anyway, glad y'all hooked up! -Tammy

There's nothing funner than fun. And that all sounds like fun.

what fun getting to meet Celeste and Pat!