I was just thinking, if I can do this many entries about a two-day road trip, Lord help my readers if I ever go on a week-long vacation.
I told Cliff more than once to take as much time as he wanted looking at red tractors.  "Don't worry whether I'm bored," I said, "because I have plenty to read on my Nook if I get tired of tractors." 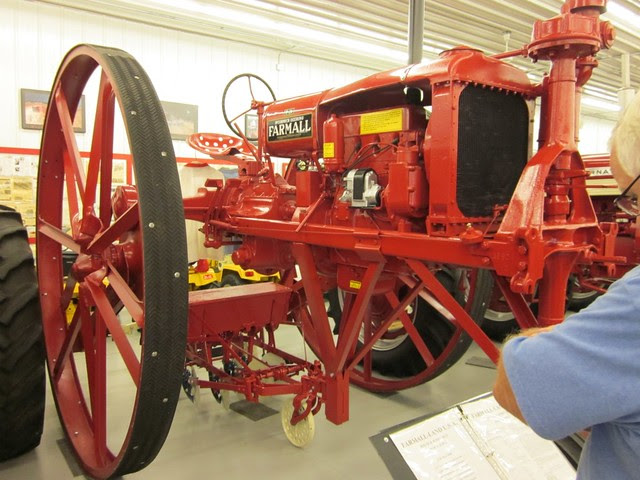 So he took me at my word and looked... 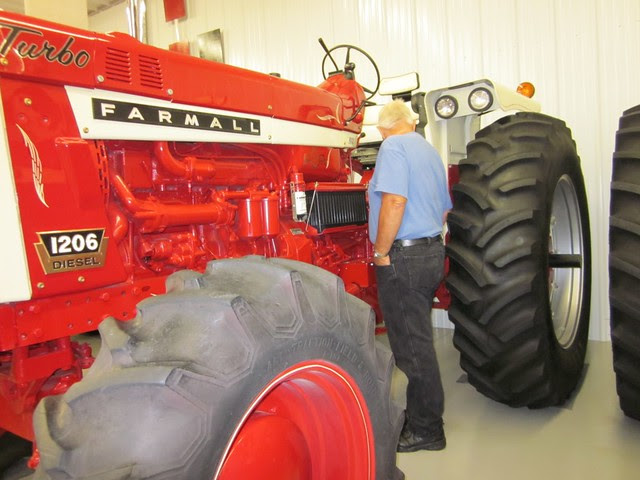 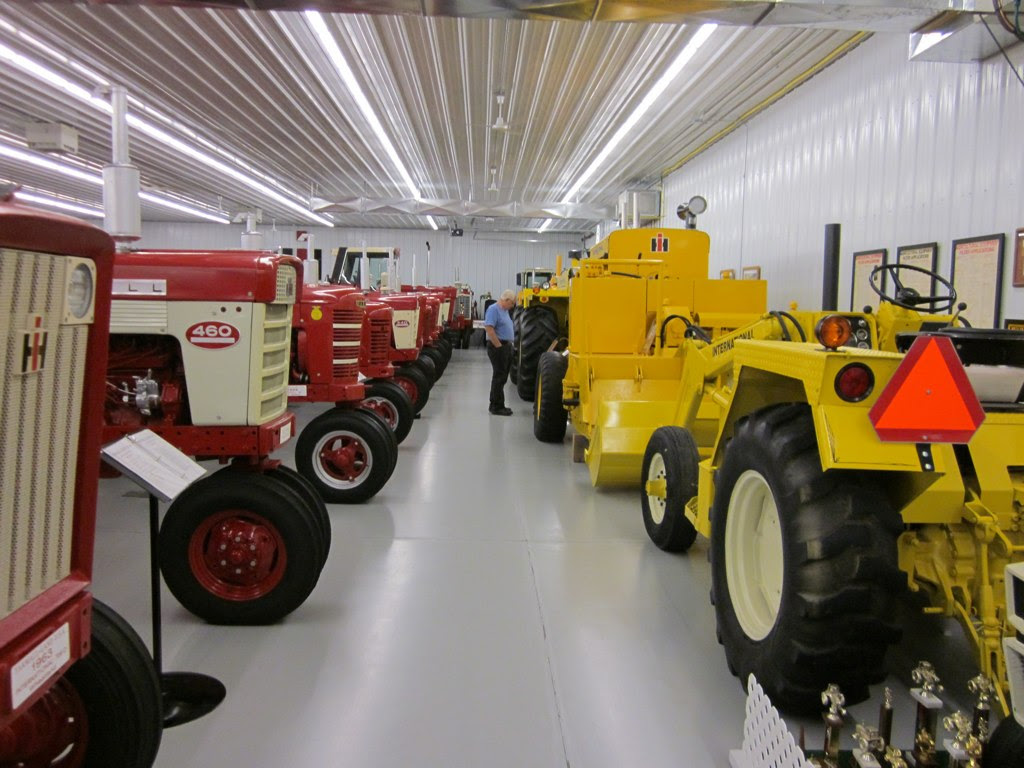 and looked.  You get the picture.
Meanwhile, I enjoyed some of the signs the owner of the place had on his tractors. 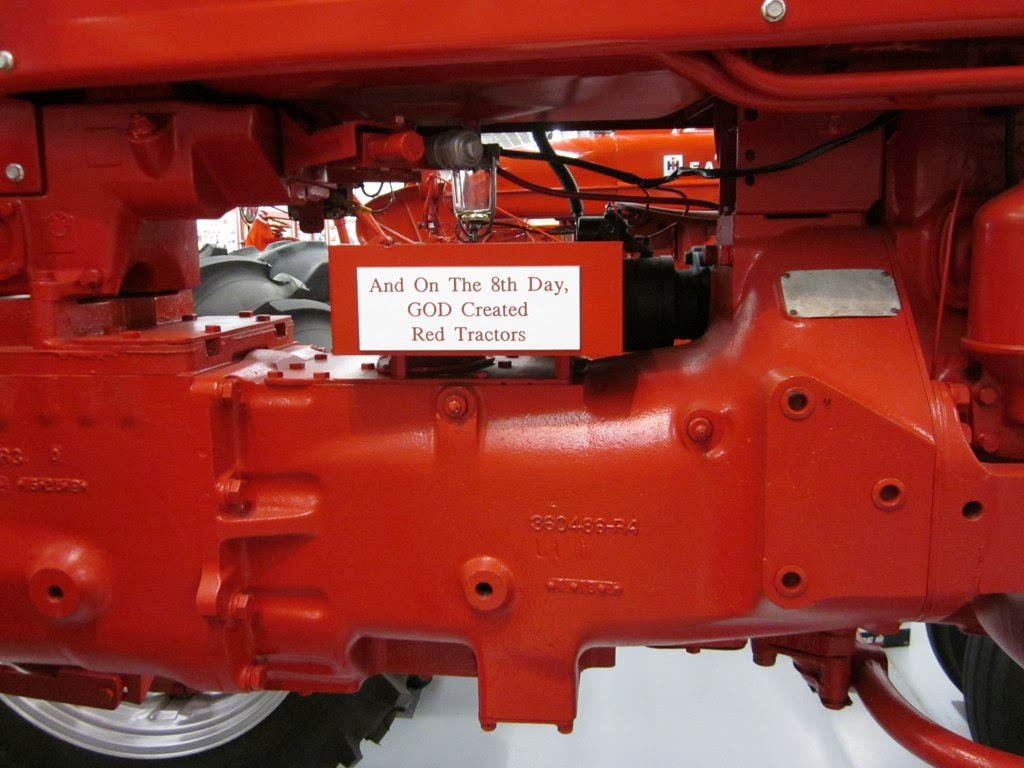 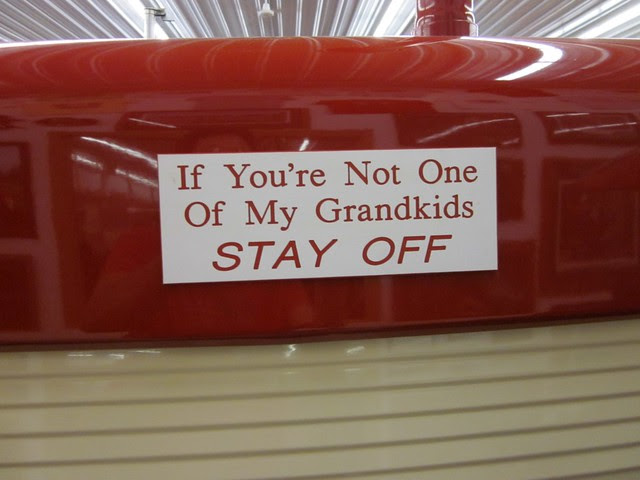 I stayed with Cliff for awhile, then I took my Nook and went to the Tractor Widow's Lounge.  Yes, there is such a place. 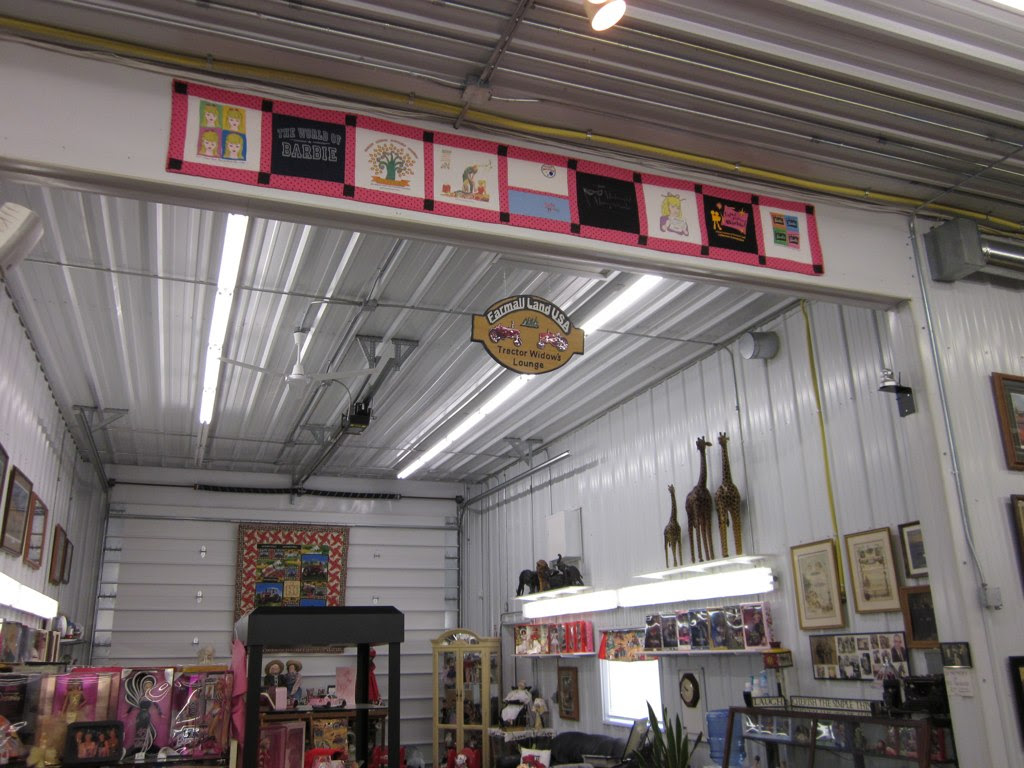 At one point I actually reclined on the couch and fell asleep.  Other ladies came and went while I was there, but I think I stayed the longest.  By the time Cliff was done looking, we'd been there three hours, and I felt quite rested.  As we left Farmall-Land, I suggested to Cliff that he try to call the guy at Griswald, Iowa, who had the "by appointment only" museum.  He did, and the man agreed to meet us there in twenty minutes. 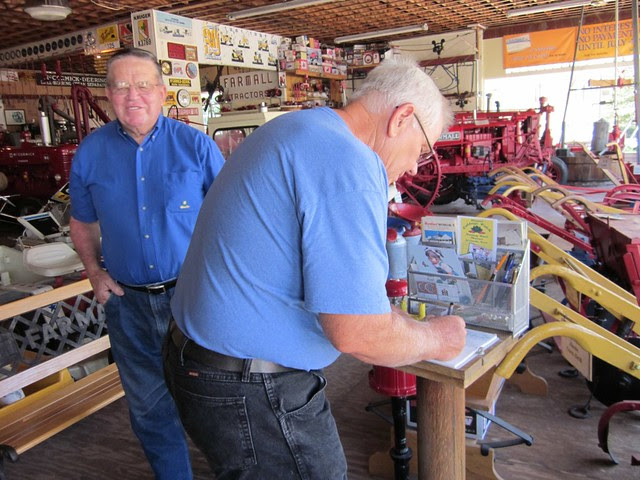 His name was Dale Rush; that picture caught him with an awkward expression, but he's a quite normal-looking guy.  He wouldn't take any sort of admission; he and his wife are collectors, and I guess they just like seeing somebody else enjoy their loot. 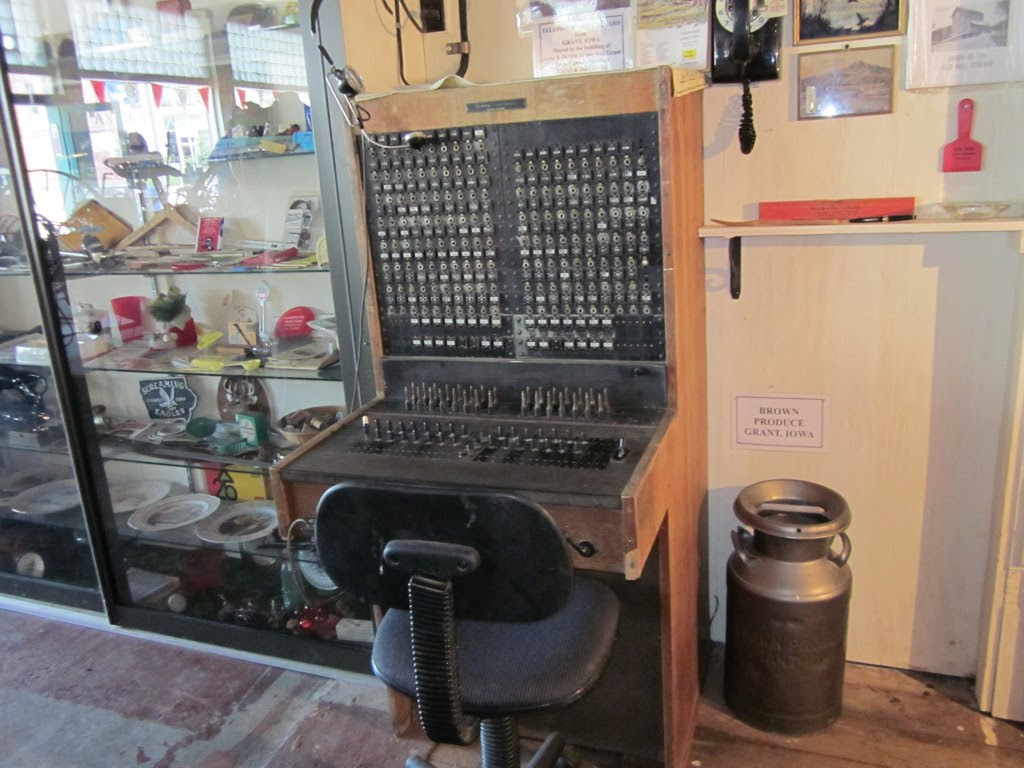 He had a switchboard similar to the ones I grew up with. 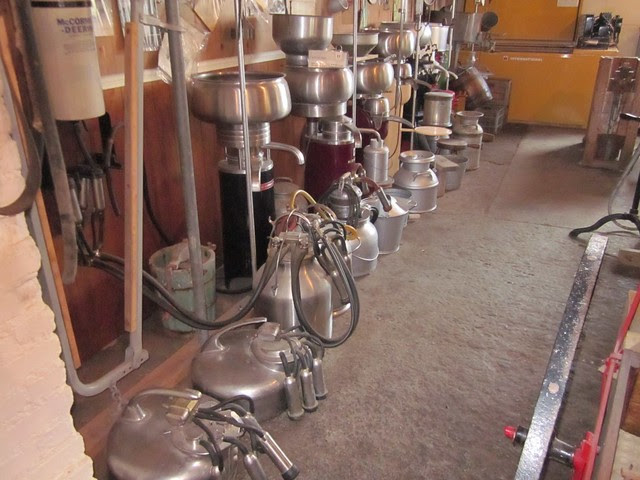 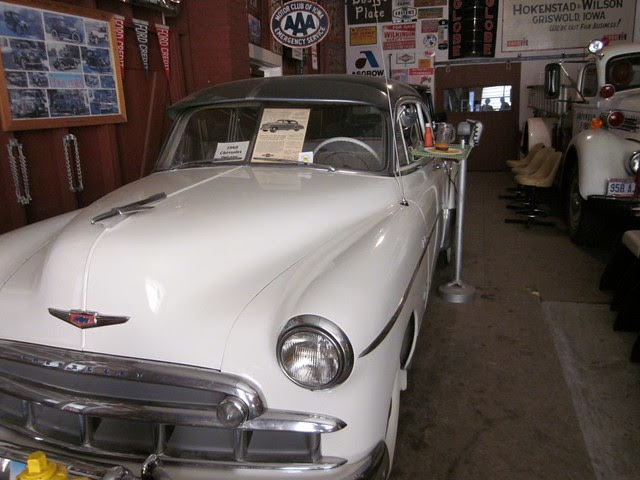 A couple of nice old vehicles. 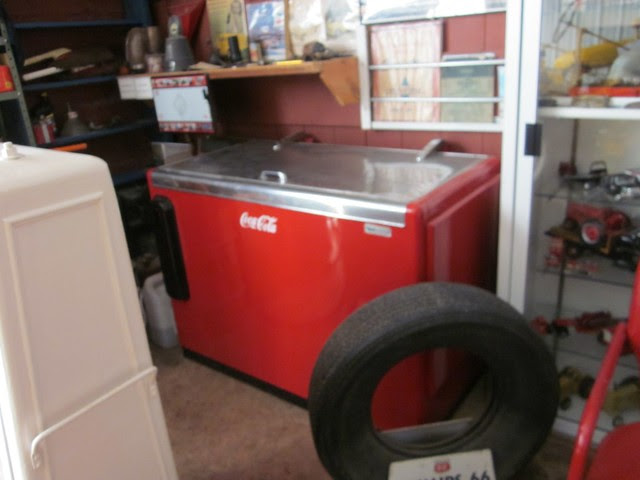 A Coke machine like those I remember using as a child.  I hate it that I blurred this picture. 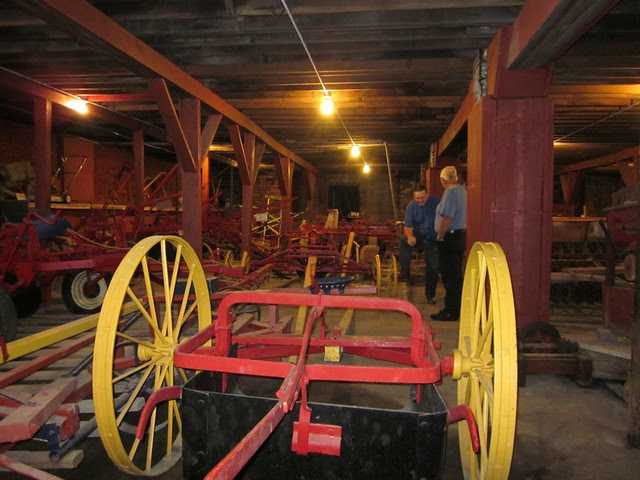 And then we went to the basement, which was sort of a relief, because it was cooler.  Musty-smelling like my grandma's old celler, but cooler.  It was a hundred degrees outside, and the upstairs was really hot.  This isn't a money-making enterprise, so there would be no sense in the man spending money to air-condition it.  He did have fans going to move the air a little.
In its own way, this place was as enjoyable as Farmall-Land, and we were really glad somebody had given us a heads-up about it.
Posted by Donna. W at 9:57 AM

Had to chuckle over the fact there was a Tractor Widow's Lounge. And those signs on the tractors made me smile too.

Sounds like you guys are having some well deserved fun..
I think thats wonderful..

You're my kind of woman, don't get bored, entertain yourself.

Oh! this looks like great fun! I love road trips that just kind of meander around without much planning and you get to do exactly what you want, when you want. The pictures are great! M.

Glad Cliff is settling into retirement so well! Very interesting place you guys visited! Thanks for sharing!

This remined me of my vacations---looking at fire trucks and fire trucks. to me, you see one---you've seen them all. But, my late husband, being a fire chief HAD to inspect each and everyone. BUT--enjoy while you can.

At first I was thinking Eh! Tractors... no thank you. But after looking at the pics of the stuff in both places that looks like a couple of pretty interesting places. I think every big store should have a tractor widows lounge in it.