As a child, I would sneak a cat into the house when my parents were both at work, but my parents were not the kind of people who wanted a cat inside.  Mother often knew when I'd been bringing cats in:  One cat had been sneaking in a closet to poop for weeks when my mom found the dirty deed (guess who had to clean it up?); another had kittens in a basket of clean, folded clothes; and one, being loaded with fleas, was the cause of my mom's allergy to fleas to flare up terribly, her lower legs covered with hives-like bumps and sores.

As a nineteen-year-old living in an apartment, I once brought in an outside cat from my parents' barn on their place near Blue Springs, but that particular cat had learned the joys of living free and tore things up while I was at work.  So I returned her to the country.  When I was twenty-one, I married Cliff:  He hated cats, especially in the house.  He was always telling the story about his little sister's cat, Smarsh, pooping in his bed one time, then covering it up with his blankets.  Cliff even thought a cat purring was creepy; he called it "growling".  Truth be told, after I'd lived with my husband awhile, I didn't want house cats either.

However, Cliff has no problem with the Blue, the kitten, coming out of his room (the back porch) and playing for awhile.  Sometimes the silly cat runs from chair to chair, climbing up them like they are mountains, then jumping down and running across the room to attack Gabe.  Cliff admits to enjoying the energetic little feline, and Gabe is obviously happy to have a playmate... and sometimes bedmate.  So far, so good. 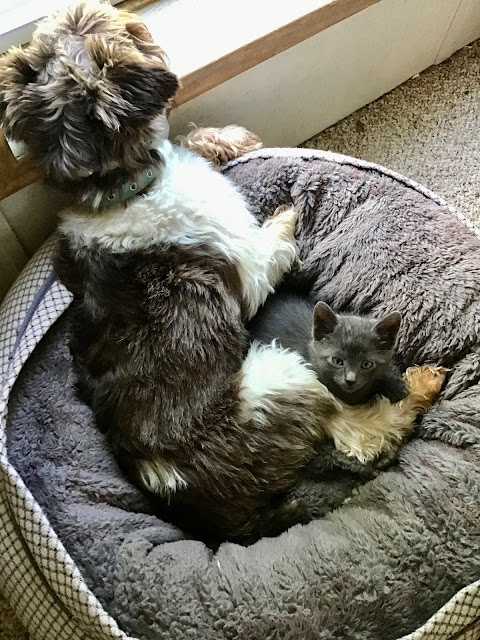 Pretty soon I'll go out to the hammock-swing with a book; the cat will probably play on and around the front porch, as usual.  He isn't that interested in walking in the grass yet, although he did follow me and Gabe to the chicken-house the other day.

When the two outlaws aren't sleeping together, they do quite a bit of wrestling.  Blue holds his own, but I do stop Gabe if he seems to be hurting him, even if the cat did ask for it.  The video shows them scuffling.

I finally got a chance to go in Walmart and pick up some cat litter, a box to contain the litter, and a cat bed.  At first I thought I had wasted my time and money, because after putting the new litter box filled with nice-smelling litter in the same spot his temporary litter-box filled with oil-dry had been, I checked on him and found him stretched out sound asleep on top of the fragrant litter.  It didn't take me long to figure out  a way to stop that behavior:  I simply used my new pooper-scooper, pulled a hunk of poop out of the oil-dry he'd been using, and placed it in the middle of the cat's new litter box.  Problem solved.  Then I had to figure out how to get him to sleep in his new bed.  He'd been sleeping on a folded flannel sheet before, and apparently he liked it.  But since I had taken it away, he decided to sleep on a skimpy hand-towel I'd been using to wipe Gabe's dirty feet off.  I'd put him in the bed, he'd sniff at it, stick his nose in the air, and run to the dirty hand towel.  I fixed that by spreading the towel across the cat bed.  I imagine I could remove the towel now, but what's the hurry?

Just call me the cat whisperer.

Cliff finally got to see the pulmonologist yesterday about his shortness of breath.  The doctor told him he has late-onset asthma and gave him a couple kinds of pills, plus Albuterol to use use up to four times a day if he needs it.  He's afraid to use it because he thinks it might make him "feel funny".  The man has had more than one bad experience with pain pills and such, so he's scared of everything unfamiliar given to him by a physician.  Men!  You can't tell them anything.

My bluebirds are back in their house; there are five eggs so far.  This morning when Gabe and I returned from our walk, I noticed a sparrow sitting atop the birdhouse; it scared me, because sparrows will destroy a bluebird's nest... breaking eggs, killing the babies... but when the sparrow flew away at my approach, I peeked inside and saw the eggs.  So far, so good.

And that's the way it is at Woodhaven Acres.

I love cats, and Blue is a beauty. Clever strategies to acclimate Blue to the new litter box and bed. Cliff isn't allergic to cats, is he? Many people are.

If trying to encourage an outside cat (who is used to using the whole world as his toilet) to use a litter box, it's best to buy the plain unscented clay litter (not the "turns the urine into one big clump" kind), as the clay litter most resembles sand outside. And kitties sometimes sleep in their kitty box... that's ok. Blue is beautiful. I've been thinking about another pet for quite some time. Well, ever since our kitty Mistletoe passed away August 8, 2018. But I can't decide if I want a dog or a cat. I'd have to take a dog outside to go potty...but they're more "simple minded", where as a cat is quite "complex minded". I had a vet tell me one time, years ago, "A dog does things on your terms.... a cat does things on his terms." Very true! Love, Andrea xoxo