When I was growing up, every holiday involved a trip to Grandma’s house.  “Over the River and Through the Woods” was a song that resonated with me, even though we didn’t have to drive through a lot of woods to get there.  Grandma lived alone on a 40-acre farm in Harrison County, Missouri, in the house where her children were born; Grandpa died in 1938, I believe, so I never knew him.

My parents and I moved so often, Grandma’s house (and Uncle Leo’s place, right down the road from her) were like a magnet, places that didn’t change much over the years no matter how many times Mother, Daddy, and I moved.  Grandma’s house was like the center of the universe, the place where I felt I was really touching home.  We’d gather there at Christmas, Easter, Independence Day, and Thanksgiving.  Eagleville happened to be at sort of a central location:  My parents and I, and my sister and her family, lived in the Kansas City area after I was twelve.  We’d usually all ride together, the six of us, traveling up old 69 highway through Cameron.  Uncle Lloyd and Aunt Ruby also moved to Kansas City eventually.  Uncle Paul was in Iowa, and my brother’s family was, too.  The other Stevens aunts and uncles never moved out of Harrison County.

Grandma’s house wasn’t all that big, with four rooms downstairs and one big room upstairs.  She only had an outhouse for many years, and no running water in the house.  Later my uncles put a toilet in one of the downstairs bedrooms because Grandma had some stomach issues that plagued her occasionally, and was getting pretty old to have to put on a coat and go outside to the toilet all the time.  However, when we were all there, everybody still used the toilet outside, which was back behind the house. 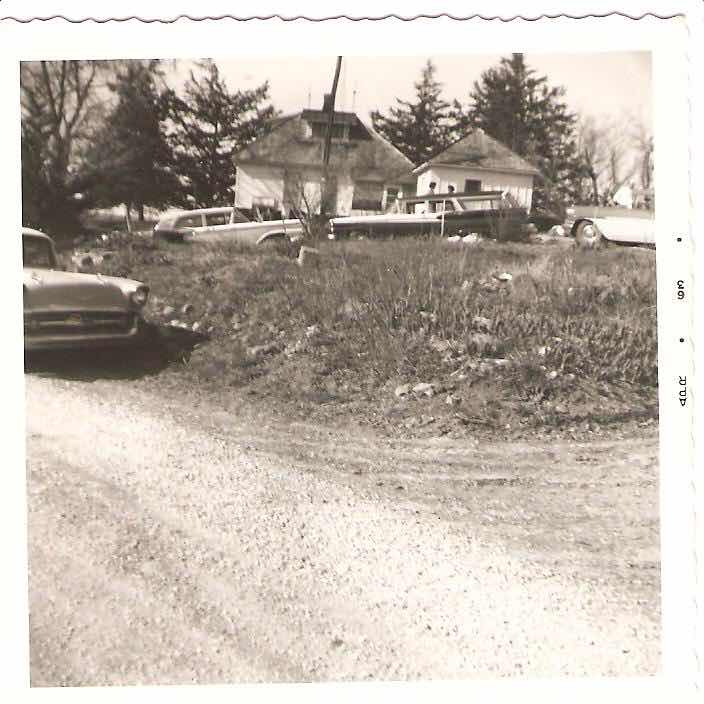 This was taken during one of our family gatherings.  You can see the smokehouse and Grandma’s little house in the background.  Looking back, it amazes me how many people managed to fit in there.  Good grief, there must have been thirty or more of us at times!  In spring and summer, of course, the men and children would hang out in the yard.  This was back when men wore hats and most of them smoked, so they’d be visiting and smoking, just staying out of the way; the farmers among them would share opinions on what tractors they liked and how the crops were doing, which I found rather boring.  Of course, once I was married to city-boy Cliff, turns out he loved to sit in on that sort of conversation... and years later went totally crazy buying some of the very tractors my uncles were comparing.  However, by the time I met Cliff, Grandma was gone.  She passed on at the age of 77, victim of the intestinal issues she had lived with off and on for many years.  She had never had to check into a hospital until that last illness.

Oh, the smells!  We knew there’d be noodles made by Grandma, and macaroni and cheese brought by Aunt Bernice.  Christmas and Thanksgiving we had turkey, of course, and dressing.  Sometimes Grandma would butcher a hen she thought had quit laying eggs, but then she’d find unfinished soft-shelled eggs inside the bird when she dressed it.  Oops!  Poor chicken wasn’t a freeloader after all.

There were pies and cobblers aplenty.

It was always nice to hear the uncles tell me how much I had grown, and hang out with my cousins.  Laughter and much talking filled the house and yard.  There was a proper order to follow when it was time to eat:  First, women with small children were told to go ahead and fill their children’s plates and get them settled.  Then the men; forget all about “ladies first”!  The men led the pack.  I always used to wonder why, thinking maybe it was because they were “the heads of the house”.  I imagine it actually stemmed from the fact that these were farm-raised folks:  The men worked out in the fields in summer and needed as much time in the field as possible when they were planting or harvesting; so they ate first in order to get back to business.  That’s also why I grew up with “dinner” being the noon meal, the big meal of the day.  We weren’t farmers, but that farm background still had its influence.

Yes, those were good times.  When I hear “I’ll Be Home for Christmas”, I’m transported to Grandma’s house as if by magic.  That’s the home of my heart.  I never thought about the fact it wouldn’t always be there for me, but my memories are so very real I can hear the sounds, see the people, and smell the food, even today.

What wonderful memories. And how nice you have pictures too. Going home for the holidays, if even in your mind, is a wonderful thing.

I love this post, the photos as well. As an adult who worked full time, I always found it ironic that on holidays, women are still expected to do all the cooking and the cleaning up afterward! I guess that is why I don't really do dinners any more!

These are wonderful memories and pictures! When I was small, we also went to our grandmother’s house. It was a totally different experience. Very sedate. Loved it when we changed it to our house.

Oh Donna, this is one of THE most enjoyable blog posts I've ever read!! Not so very long ago, our oldest granddaughter (10) looked up at me and said "Don't ever sell this house, Grandma, ok?" Perhaps she will write a blog post like yours someday. Lovingly, Andrea xoxo

Love this post and your memories of grandma's house. She lives on in your love and appreciation for her. My grandparents stayed "east of the mountains"(as we say in WA) and we used to have to drive over a snowy (terrifying) mountain pass to get there. I remember my Dad crawling around under the car putting on chains. But then when we got there, it was magical. Both sets of grandparents had old and interesting houses with staircases, decorations and ornate mirrors that we didn't have at home.