There’s something sort of “blah” about the days between Christmas and the New Year’s that seems to set the tone for the rest of the winter.  We are always a few pounds heavier and somewhat sluggish from eating so many sweets and starches, so we don’t feel very good about ourselves.
We enjoyed our little trip to Kansas.  I changed my mind about which audio book to play as we traveled, settling on “Rooster Bar” by John Grisham.  After listening to it awhile I realized I’d read it before.  I don’t remember much about it, though, so it was entertaining enough to make the time pass.  This is more for Cliff than me, anyhow.  He hates driving long distances, especially since he’s gotten older, so anything that helps make the driving time go faster for him is great.
I had been watching the weather forecast for both McPherson and Kansas City for a couple of weeks, because one year we went there for Christmas and more or less made our way home on solid ice, watching cars slide into the ditches as we went.  However, the temperatures this time turned out to be considerably above freezing for the trip home, although we did drive through rain for most of the way home.  We had a problem this time, though, when we first headed home, about fifteen miles out of McPherson:  The check-engine light came on, and the engine started missing.  Cliff turned back toward McPherson and had me call my nephew and ask him for names of some auto repair places.
I wrote down the phone number and address of one, and we found it.  Unfortunately, they were too busy to take us, but the guy told us to go to O’Reilly’s and they’d check it for us.  Cliff was pretty upset by this time, concerned that our old 2003 Mercury with over 200,000 miles on it might cause us a lot of expense.  You know the things that go through a person’s head when a car starts messing up... you wonder if you will be sidelined for hours or days.  Of course in the event we had to stay overnight, we could go back to Maxine’s, but they were leaving the next day to have Christmas with the grandkids.  Last-minute guests could have really messed up everybody’s plans.
There were no other customers at O’Reilly’s, so a young fellow checked out the problem and told us the number seven misfired on startup and later, also.  The Number 7 coil pack was shot.  He then told us to go about three blocks down the street and we’d find an auto repair place that could help us.  He assured us they were nice folks and would do us right.
When we walked in the door at Superior Automotive, they were pretty busy.  Cliff said he’s pretty sure they were going to turn us away, but the lady told us to wait a minute and she’d go talk to her husband.  He took the car in and had it fixed promptly.  I don’t think we were there over half-an-hour, total.  With tax, the total was $97.90 for labor and parts.  Not bad at all!
We were only two hours later getting home than we’d originally planned.  We picked Gabe up in Independence at the granddaughter’s and came on home.  Amber assured us, once again, that Gabe can stay with her and her dog any time.
We had a great time Sunday with our finger foods, desserts, and noodles.  Eight-month-old Amara had her share, and the noodles, a double batch of them, where gone by days end.  The two-night stay with my sister was the frosting on the cake.  It’s been a good holiday season.
I’ve started reading a non-fiction book, “Killers of the Flower Moon:  The Osage murders and the birth of the FBI”.  Cliff is reading “The Memory Man”.
Sincerely yours,
Donna
P.S.
As I was finishing the blog entry, a long-time friend came by.  My kids might recognize him, since he used to be their hero when they were preschool age.  He’s changed just a bit since he was 16. 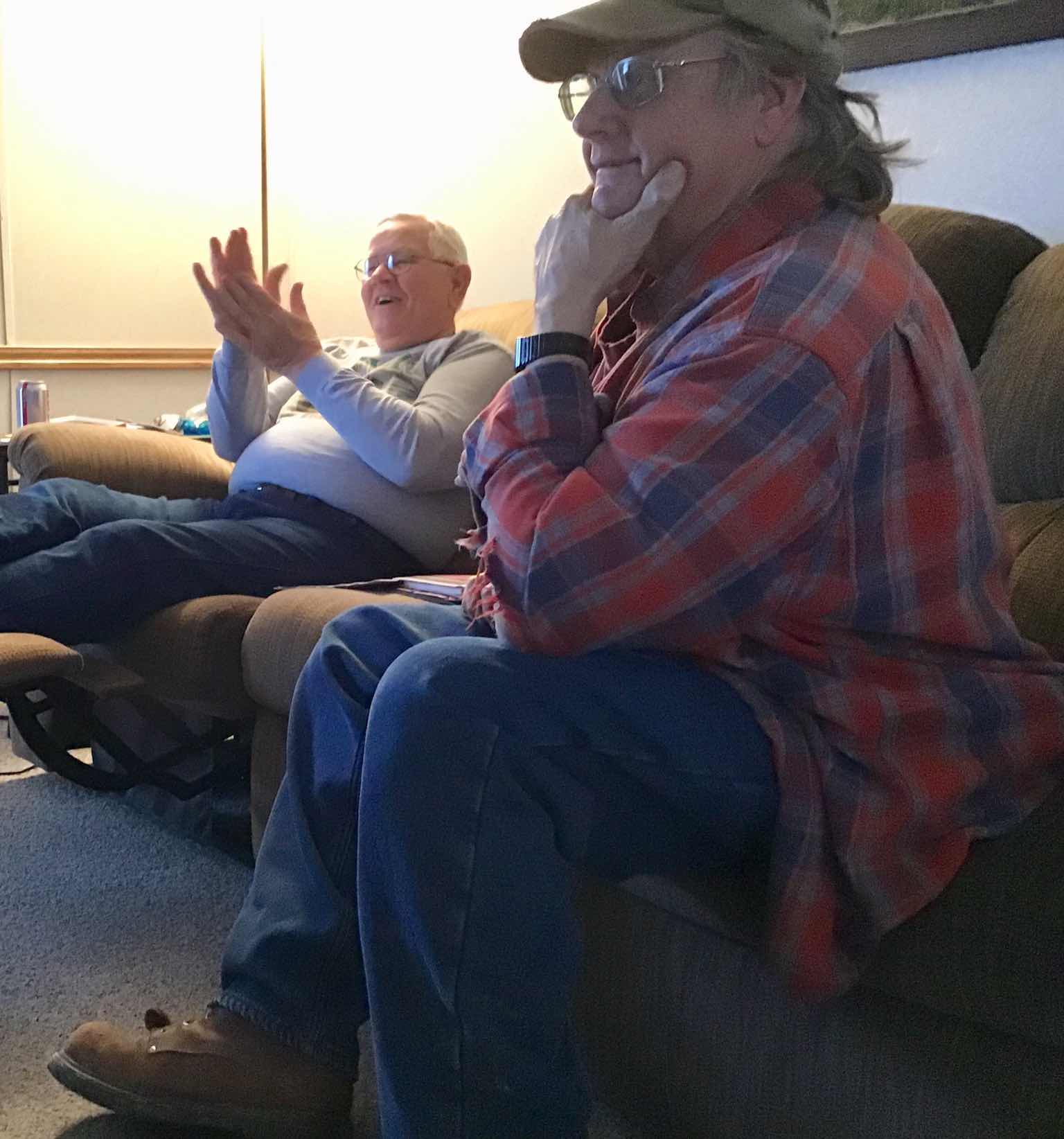 About fifty years ago he made me a checkbook cover with my initials on it, and I’ve used it all these years.  He stopped by a while back and I showed him how it was falling apart, so he took it home to fix.  Today he brought it back: 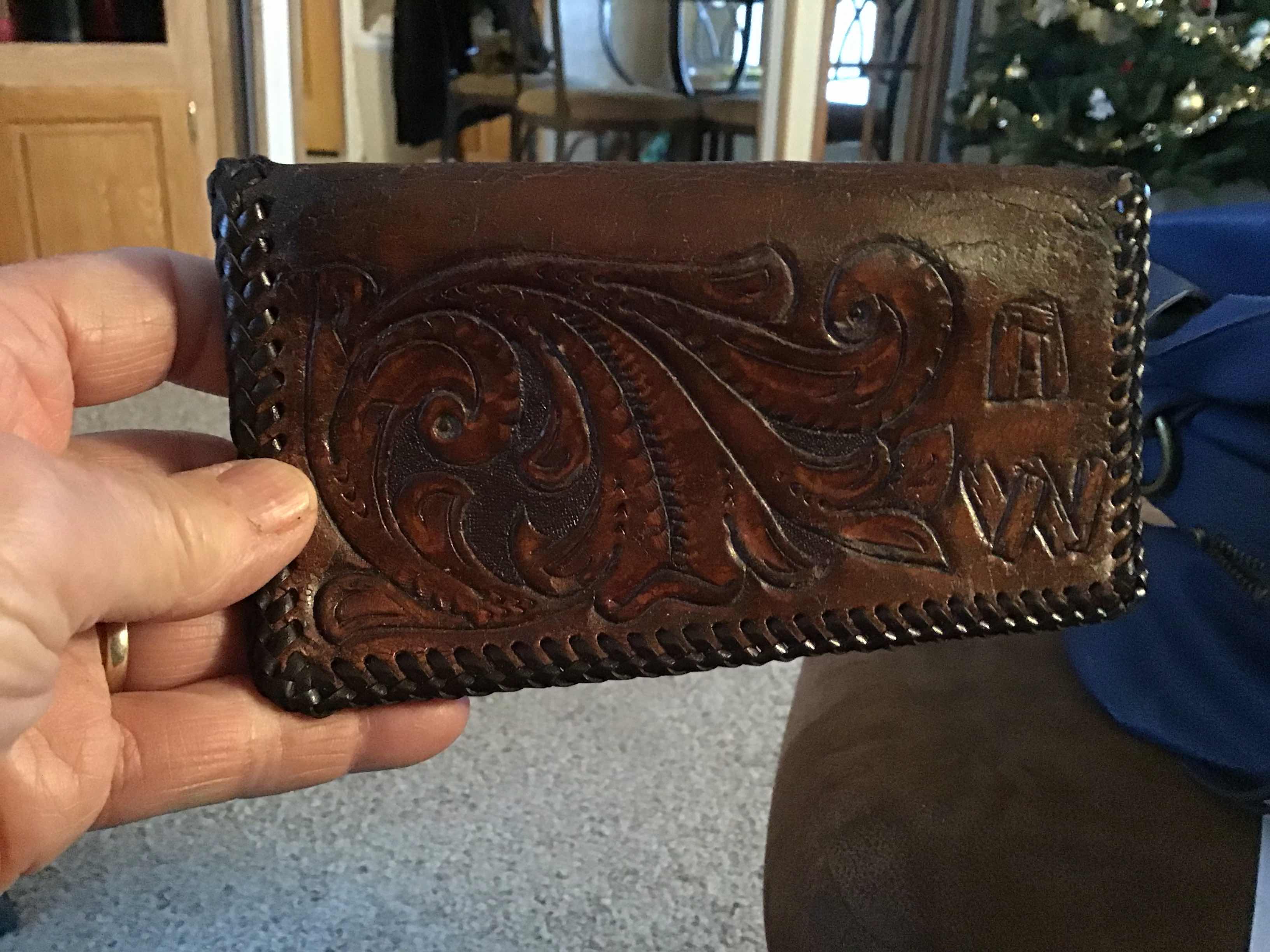 How neat that he was able to repair it so well! I used to do leather work when I was a teen...a century or so ago.

glad your car was repaired quickly and you got home safely. bet gabe missed you.

It does sound like a wonderful Christmas! So glad the car was quickly fixed and didn't cost much in the realm of things. Repairs can get expensive for sure.

It does sound like a wonderful Christmas; even the problems got handled in a speedy fashion. Love your checkbook cover! Your friend reminds me of the actor Jeff Daniels. Let me know what you think of "Killers..." We really enjoyed that one in Book Club--lots to discuss.