My daughter loves relaxing in a hammock on her porch and decided I needed a hammock, so she bought one for me.  Unfortunately, she bought it as a Christmas gift, so I didn't get to use it for a long time.  On Mother's day she came out to supervise Cliff as he hung it for me, so her gift also became a Mother's Day gift, with Cliff putting in his efforts for Mother's Day... so it was also a gift from him.  None of the trees planted in my yard in 2008 were big enough to have branches that would support the thing (with my weight in it), so Rachel suggested it be hung on the big tree near Cliff's shop. 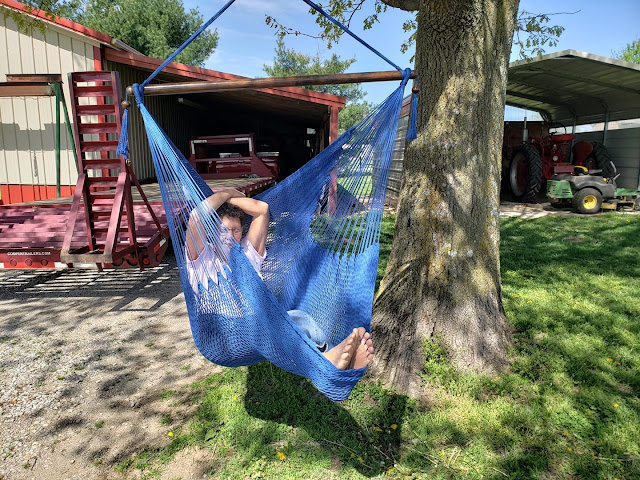 It was comfy and shade there, but anyone using the hammock (and there were several) was pretty much alone.  If folks were hanging out in the shop, the swing was too far from the group to join in discussions.  And if there was nobody in the shop, and I wanted to enjoy my gift?  REALLY alone, and yet far from the trailer house, where my Wifi lives.

I figured somebody must manufacture some sort of movable frame to support a hammock; and indeed, I found one on Amazon and showed it to Cliff.  He looked it over and said, "I could make something like that."  The grandson and Cliff have been obtaining various shapes and lengths of used metal lately at bargain-basement prices.

My birthday was Saturday.  Sunday Cliff, the grandson, and our son visiting from Georgia began construction.  Cliff called me to the shop when it was done, to make sure the hammock was at the proper height, and then it was moved to my front yard. 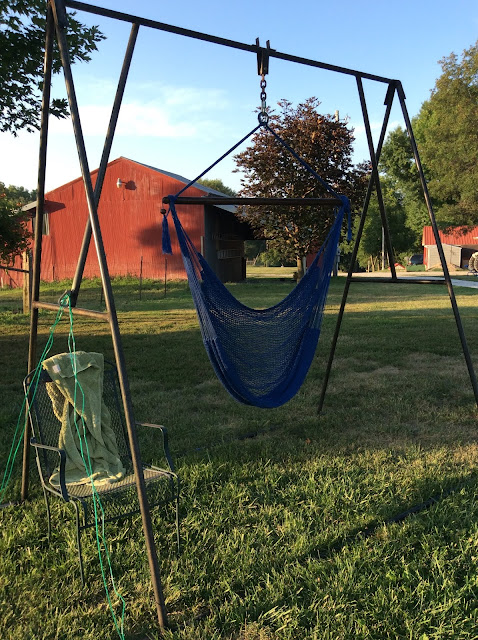 Last night I sat in that swing for a long, long time.  It was great, except for the heat.  I believe the temperature at the time was 96 degrees.  I sat there swinging myself by pushing with my toes on the ground wishing it were cooler and got an idea... 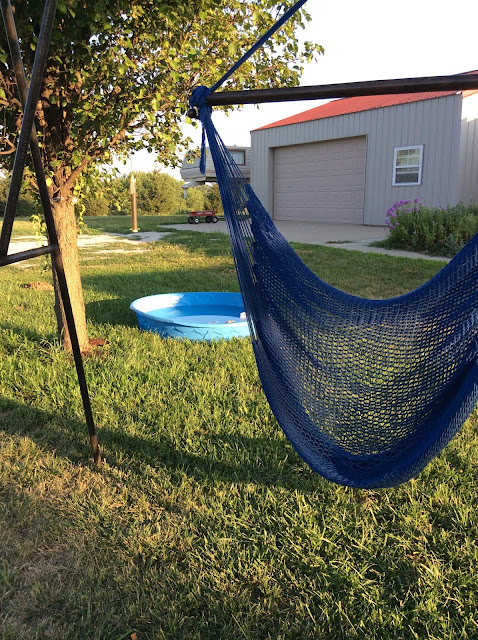 Right smack in front of me was the wading pool I'd filled for the child we babysit (and the dog, if he were so inclined).  I had light-weight clothes on and wasn't afraid to get wet, so I got out of the swing, went and sat down in the sun-warmed water, and then laid down, as much as possible, in order to get my top half wet.

I was cool and comfortable swinging for another half-hour or so before I decided to go inside.  What a wonderful world!  And now my hammock is a Christmas gift, a Mother's Day gift, and a birthday gift.  And I'll even be able to use it in winter when Cliff is in the shop with a little heat on:  That swing and its frame will go in the shop!

Peace, my friends.  Keep cool if you can.