Cliff, his sister Rena, and I went to Versailles today.  Rena drove, figuring Cliff might appreciate having a chauffer (he did).  Our plans were to visit their cousin Edna, and later, her brother, Junior.  However, the first place we always stop when we arrive in Versailles is at Aunt Gertrude's.  Why?  Because that's where Cliff said they always went first when he was a kid.  I should have taken pictures, since there was a VERY cute baby there, one of the aunt's great-grandkids.  Did I take pictures as he smiled at all of us?  Nope.  Just shoot me, because you would have laughed at the pictures I didn't take.  Just picture a happy baby boy, four months old, laughing so hard it seemed he would hurt himself.
Aunt Gertrude, who is in her eighties, has asthma.  By the time she had visited with us for an hour, she was wheezing badly.  She wanted us to stay for dinner (lunch), but we felt like that would be too much for her and went to Subway instead.
From there we went to visit the Versailles graveyard and put some cheap plastic flowers on the graves of Cliff's and Rena's parents, and a couple of siblings.  We know their spirits are not there in the cemetery, but there is something about visiting the graves of loved ones that does the heart good. 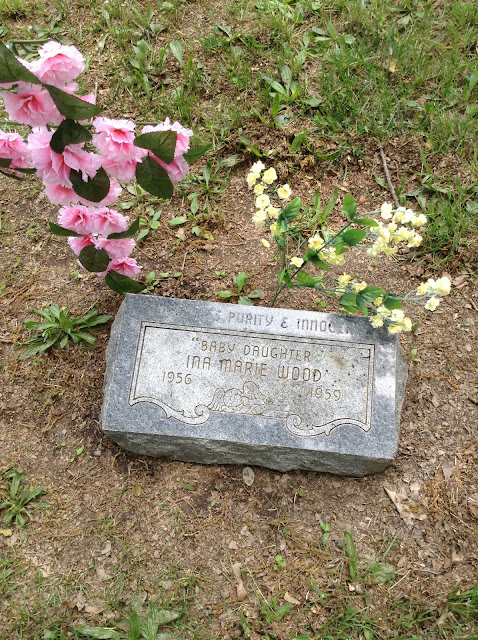 This is the stone at the head of Cliff's sister's grave.  He was fourteen years old when she died at Children's Mercy Hospital.  He and Rena talked about what a sweet baby she was. 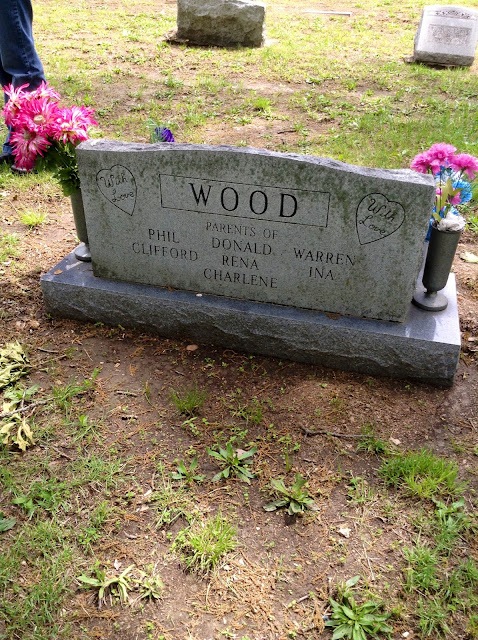 This is the back of the tombstone of Cliff's mom and dad.  We talked about them too.  Cliff's parents live on through their children in ways too numerous to mention. 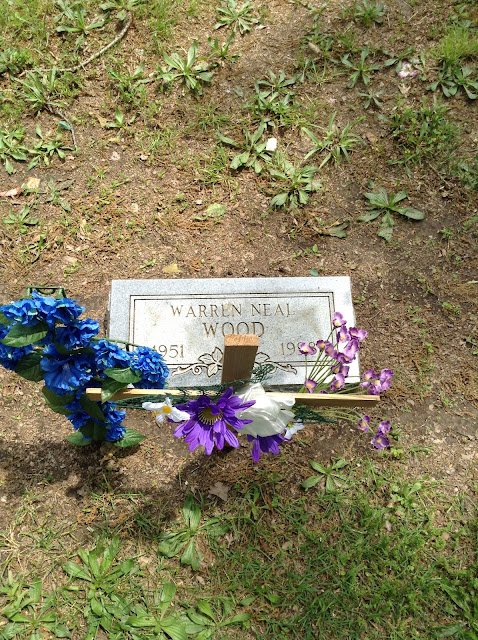 This is the final resting place of Cliff's and Rena's brother, Warren.  We all have many stories about him.  His heart was damaged by a siege of Rheumatic Fever when he was fifteen, and the weakened heart caused his death many years later.
We don't travel to the graves of our loved ones often, but I really felt good about doing this.  It reminded me of how my parents and I "decorated" the graves of relatives every year and the things I learned about my ancestors listening to the stories my parents and aunts and uncles told.  I loved it.  I think those yearly get-togethers at cemeteries is what made me love graveyards.


For those of you who remember my faithful horse, Blue, I recorded this video while riding on him.  He now lies in his own graveyard.

I am so thankful that my cousin, Pauline, is recording memories of my mom's side of the family.

Then we went to Edna's.  Again, there was a cute great-grandson, but I took no pictures.  Call me a failure.  Next we went to Junior's and had a nice visit there.  After we left his house, we saw emergency vehicles pulling out of a rural volunteer fire house.  We dropped Edna off at her house and headed toward home.  Unfortunately, we were held up by the accident to which the emergency vehicles were headed.  Not good.  You can find the accident report HERE.  Read the bottom sentence, misc. information, to see what happened.  I especially hate this because a motorcycle was involved, and there was blood on the highway that I'm sure was the biker's. 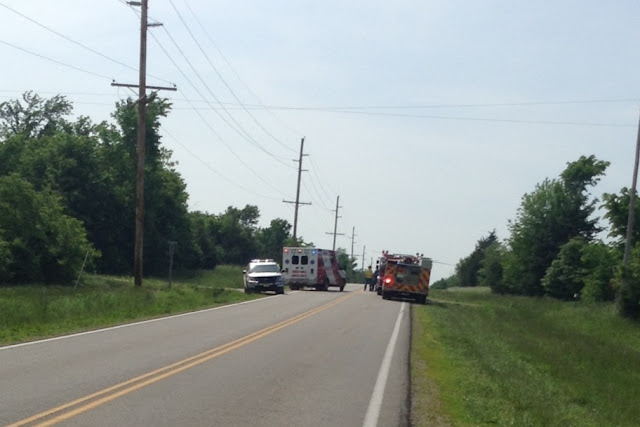 This is what we saw first... 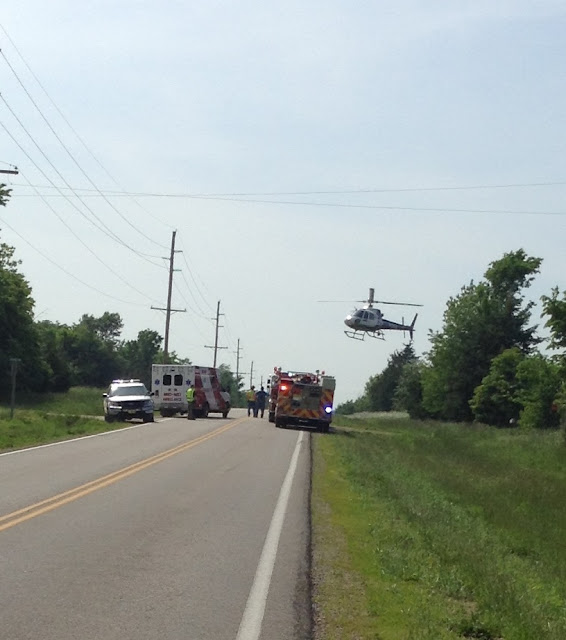 And here you see the life-flight helicopter taking the biker away.  This was a case where the motorcyclist made a bad decision.

I feel better now about the fact that we sold our Gold Wing.

I like going to the cemetery and went there today too, since my husband was also a vet. I took some cuts of rhododendron from our front flower bed since he loved that plant. (it's called Old Copper and is a really pretty coral color) I know my realist husband would be saying, "Don't spend any money on flowers! I'm dead anyway." :) Accidents really disturb me. You should have seen me the night the bridge fell into the water when I wasn't sure if Alison was on her way here or not. Basket case.

I go to put flowers on Janet's grave because I am afraid her friends may think we have forgot her if we don't.

We usually put flowers on the graves of departed friends since we live so far from where all our relatives are. I must admit in all my years I've never seen anyone riding a horse in a cemetery until now.

I love going to cemeteries, too. It sounds like you had a very nice day. The "Baby Sister" gravestone reminds me of my mother's brother who died as an infant. He was the second baby born to her parents. The oldest brother was just a toddler when he died and was too young to remember him. But all eight of the other children called him "Baby Brother", and the ones still living do to this day. So all of us grandchildren call him that too. If we're naming all my Mom's siblings or trying to remember how many there were, we'll say something like, "Oh, and nine, counting Baby Brother", although we all know his real name.

My folks always decorated the grave sites of their loved ones on Memorial Day weekend too so I continue to do the same. Glad you got out for a visit and had some help with the driving too. I hate to see accidents like that. Hope you all have a wonderful Sunday!

My goodness, that brought back memories from my grandma and me.

I love cemetery visits. I find them very calming.