We're having a heat wave

I'm sure a lot of others are too, since the whole midwest and south seem to be involved.  It's supposed to continue at least through next week, so we may as well get used to it... or stay inside.

Today is our 56th anniversary, but we're doing nothing to celebrate.  We don't made a big deal about these occasions except to wish one another happy anniversary, although for our fiftieth we went by train to the Grand Canyon.  We have our former charge, Cora, here with us.  During the summer months she's coming to visit us every other Tuesday, during the week her dad has her at his house.  We had pancakes for breakfast together this morning, but since then she has spent most of her time with Cliff out in his shop.  She just now brought a couple of sparrow eggs to me in a foam box she'd made, and I told her I might fry them.  She knew better than that, so she and Gabe went promptly outside again.  Gabe is so crazy about her, I don't think he'll ever forget her.  All I have to do is mention Cora's name and he runs to the window, barking, to see if she's here.

Because my almost-fainting episodes kept getting worse (and more often) and my regular doctor couldn't do anything for it, I finally got an appointment with a cardiologist.  He gave me some very strange instructions for the period of time until I see him in July:  I was to stop taking tge blood pressure med I've been taking in the morning (hydrochlorothiazide) and just keep taking the Amlodipine at evening.  Since my blood pressure had been running high for a while, I wondered how that would help anything, but for the last month it's been very low!  Another thing he told me to do was take my blood pressure standing up.  For whatever reason, my blood pressure is much better and I've had very few of the faint spells I was having several times a day.  Most days now, I'm not bothered by it at all, and it was several times most days, before.  Next week I'll have an echocardiogram.  I'll see the doctor again July 6, the day before my birthday.  I'm going to ask him how quitting one of my blood pressure meds made my blood pressure go down.  I've googled questions about it, but found nothing. 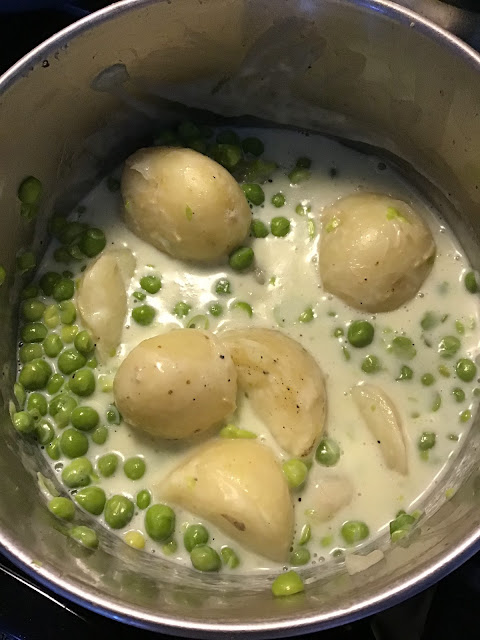 Last night we had creamed peas and new potatoes.  I don't usually make supper, we just hunt for something; but we each had a nice big bowl of this, and loved it.  Takes me back to my childhood; does anybody make creamed vegetables these days?  Cliff and I also love creamed carrots.  We are eating beets often, too.
Cliff, Cora, and Gabe just came in for the A/C, and I don't blame them.  I'll get off this thing and see what they've been up to.
Posted by Donna. W at 10:20 AM